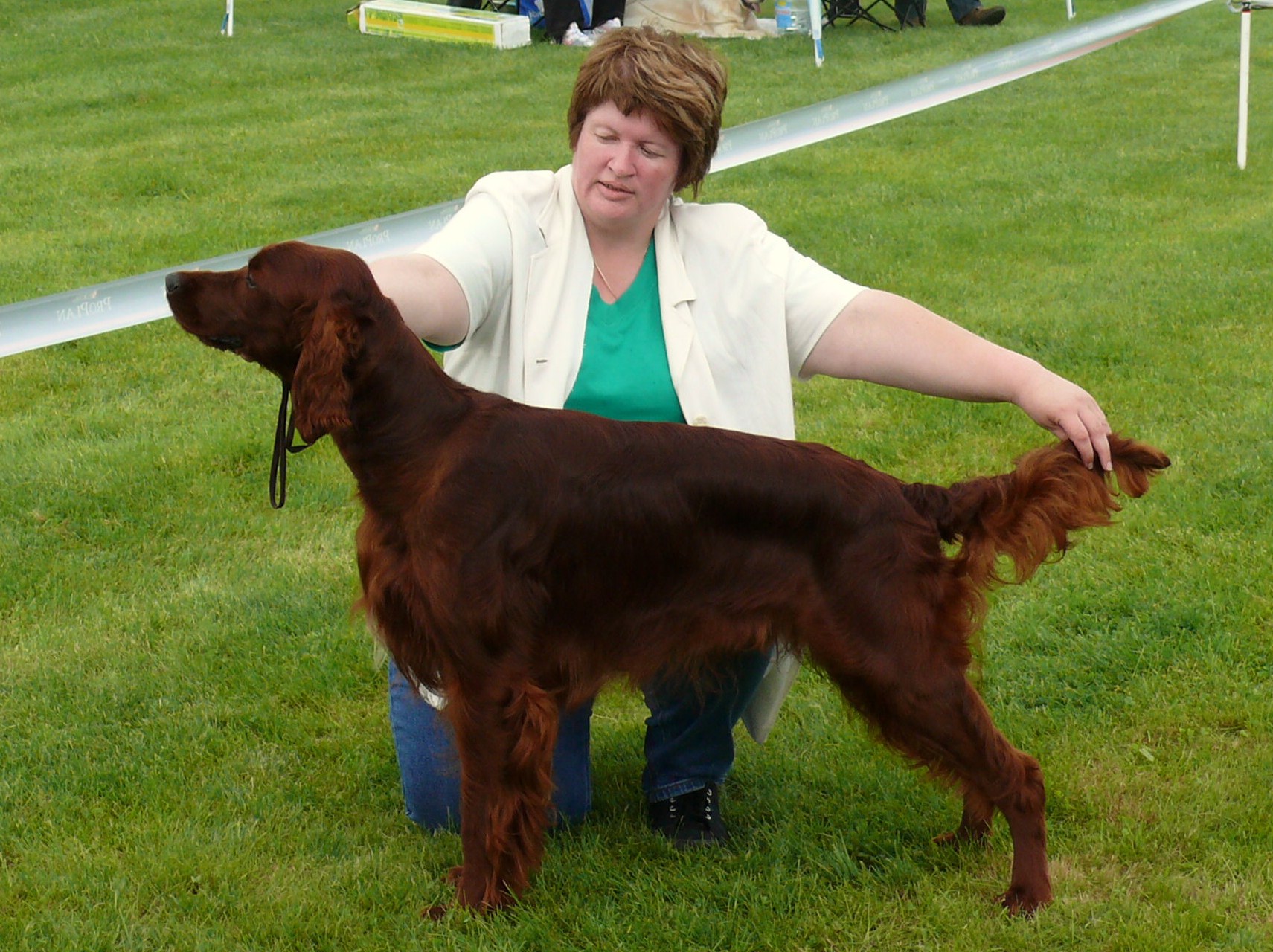 After 1,5 years of trying and a lot of fingers being kept cross (thanks everyone) we can finally say that Pika is expecting puppies around 14th July 2009. Our vet saw at least 8 on the ultrasound (now that would be a nice number so more crossed fingers please).
So we are announcing arrival of M'Eudail "V" litter by Ch Free Minds Darling (Ch Dubliner Hole in One ex Ch Zennith Ankaranska) ex Multi Ch Yesterday's Hero Red Roses in Diamond (Ch Meadowlarks Midas Touch ex Ch… Continue 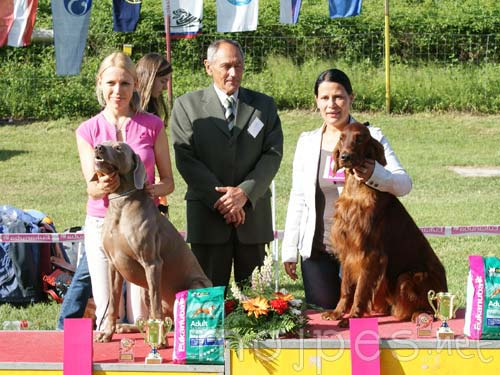 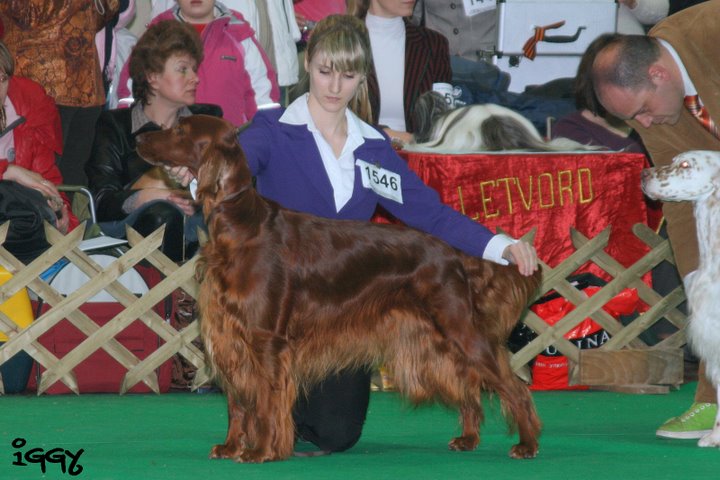 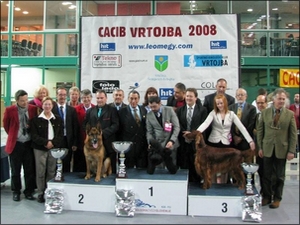 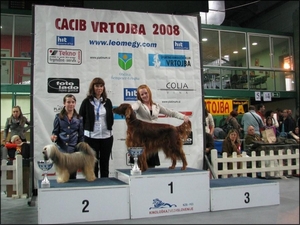 On Sunday was one of the rare occasions this year that we went to a show as exhibitors. Due to my judging and work commitments this year has been rather "dry" show wise. But it was time for our youngsters to get some idea what this show thing is all about. Breed judge was Mr Tomo Pavić from Croatia. Since I misplaced my catalogue I'll give you more details at a later time and also some better… Continue

Hey people since I had to stay home I've been rather curious what has been going on over there. So glad to hear from Dušan by SMS. The judging in the bitch ring is finished, dogs stil going on. European Winner 2008 is one of the list members - Brigitte Bardot degli Angelli Rossi. Congratulations to Valerie!!!!!!! She is half sister of my Zennith being by Romarne Rialto (full brother to Sh Ch Romarne Rheanne). Res went to Vicary's Fancy Face owned by Yvonne Hill-Decoster. 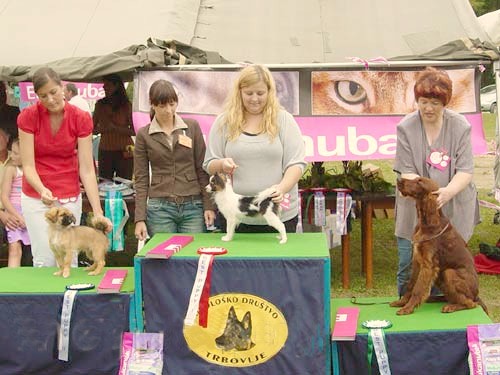 Puppies do make the time flow bye and our "A" litter is already 4,5 months old. So it was about time one of them gets his first chance in the show ring. I was very happy to be able to show M'Eudail Ars today for his new owner Miss Ajda Slavec. This being a strangley obedient litter (somehow not the kind of setters I usually breed), he actually behaved throughout the whole thing - ran with all 4 on the ground, did not chew on his leash and… Continue

Ivy and Indigo are 6 months old

The two pups from my lovely Zennith's final litter are now 6 months old and above all having a lot of fun. They are by Ch Ardan of Funny Home ex Ch Zennith Ankaranska, Bred by Miss Urška Tavčar. Indigo (Duncan to his friends) is owned by Monique Viry in France while Ivy stayed at home. 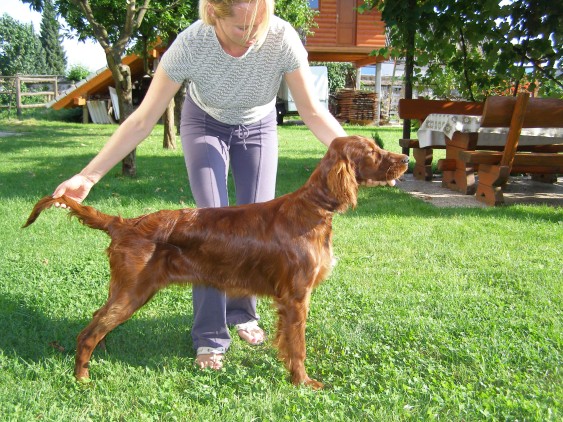 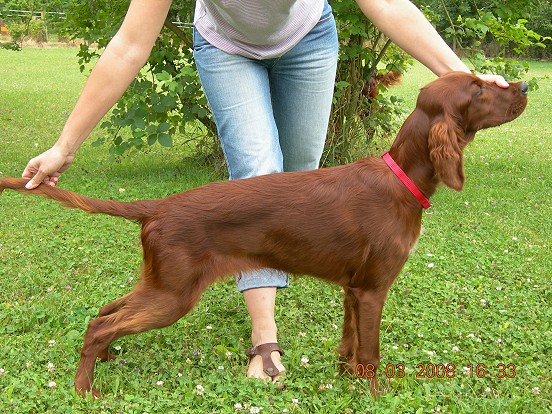 Just posting this for Christoph. He was at the CAC show in Saturday in Schauenburg. Judge was Mr Gelaude from Belgium. His "Aeon" Ch Dubliner Hole In One was Best Veteran and his "Gina" Ch M'Eudail Tangerine Dream was Best Bitch. Photos below.… 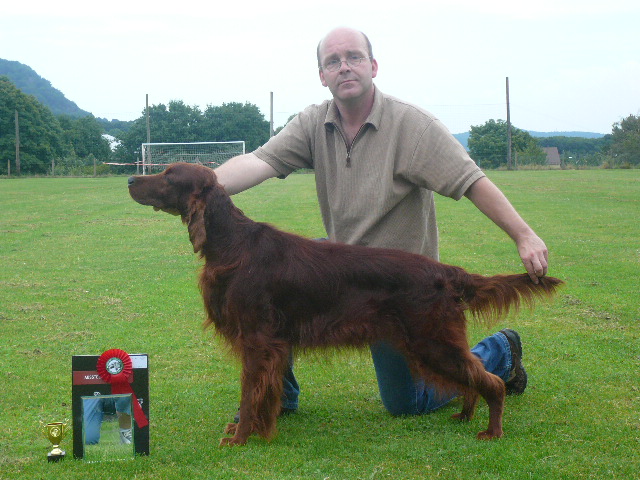 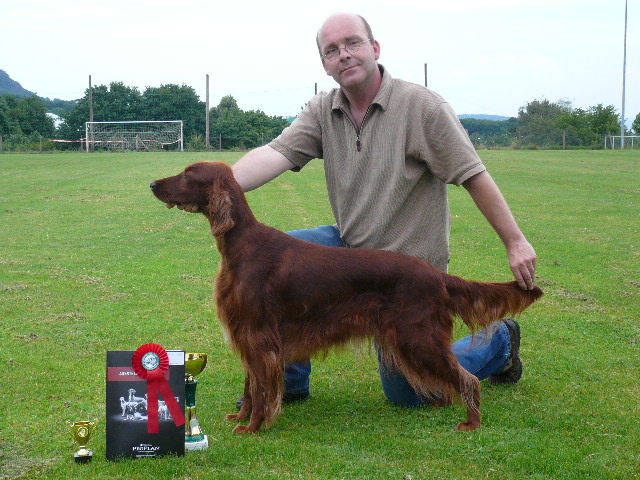 Today in Oberwart, Austria our Edy aka Multi Ch M'Eudail The Temptation got his final CACIB (9th to be correct) for the title of International Champion. He also took BOB and was 2nd in the group. Breed judge was Maria-Louisa Doppelreiter and group judge Erwin Deutscher. Now he can take his well deserved summer break.

Not to forget many congratulations to Yvonne and her two girls who both won their classes. Was very nice to talk to you at the show.

We are 3 months old and training to stand Our pups are now 3 months old and little Ahil was now able to cross the border and left to live with his new owners in Belgrade. But before he left we did a little show training with him and his two brothers Aton and Alf who are stil looking for new homes.… 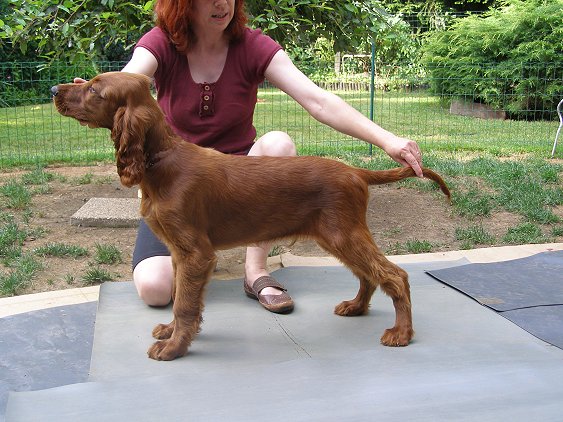 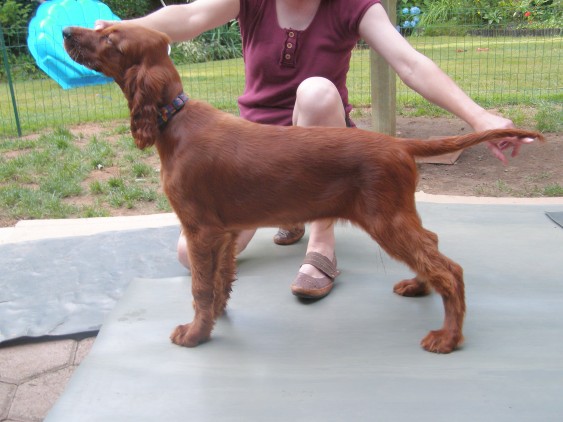 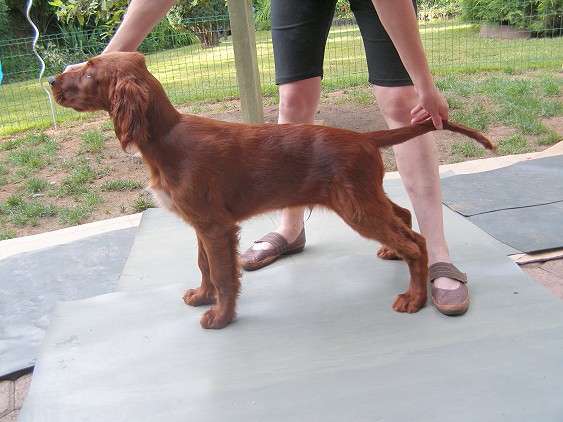 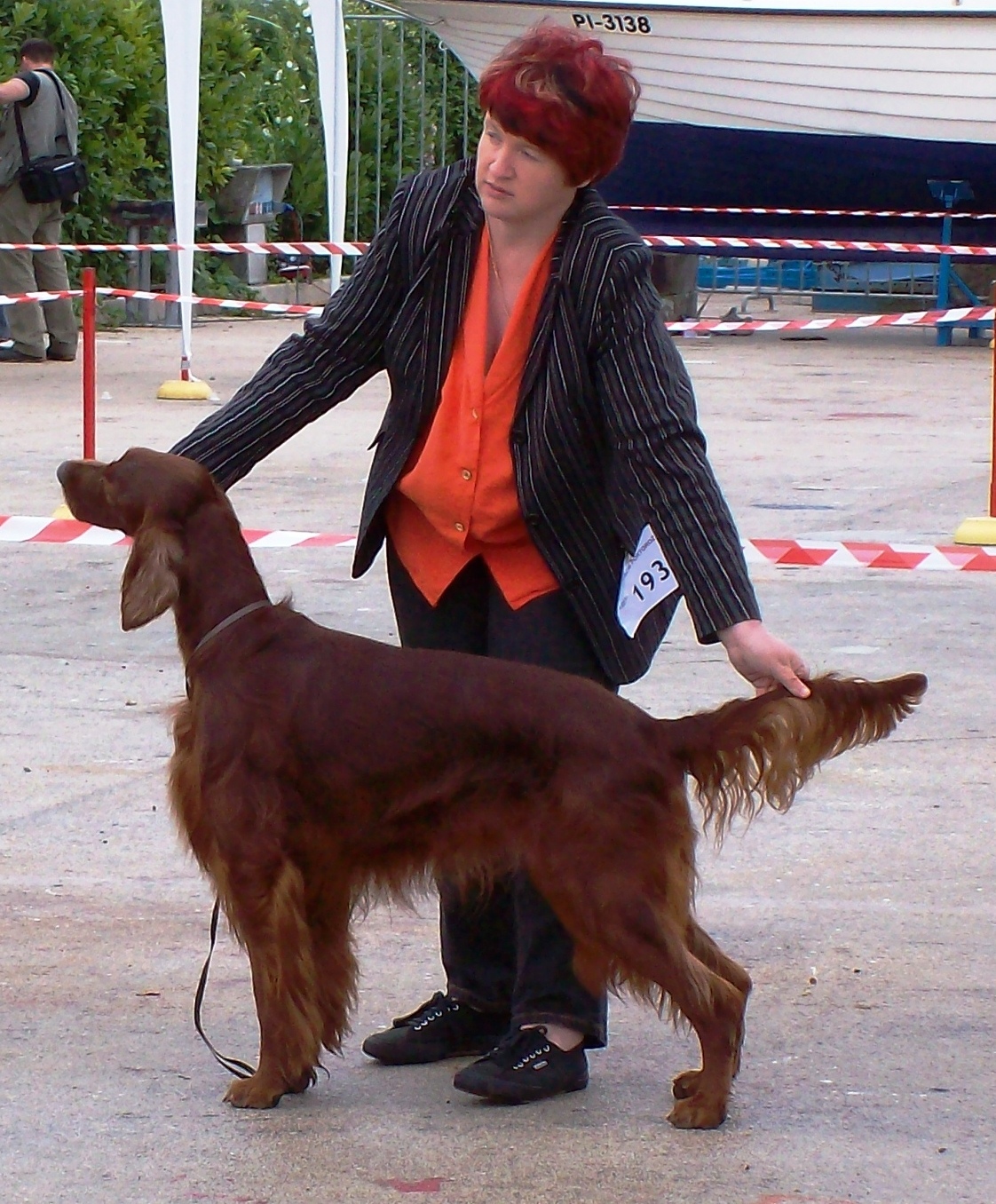 "Guiness" taking his Crufts Qualification last Saturday. He is co-owned by Peter and Sasa Hudnik. Below a photo of him at FT training. He is the sire of our current litter.… 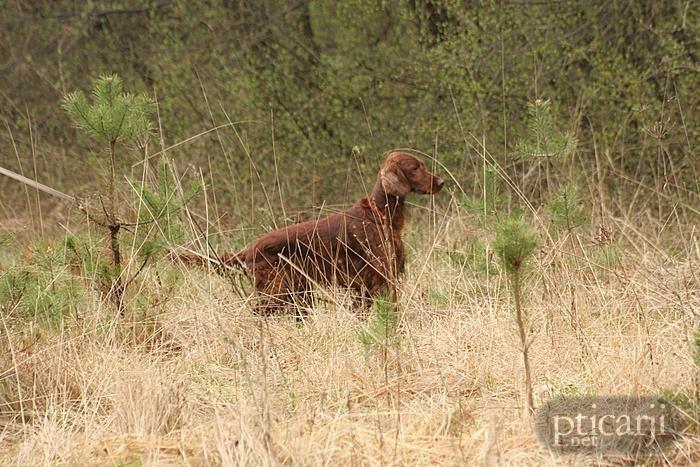 Congratulations to Christoph and "Gina" on finishing her first championship on Saturday. The photo below was taken at about 10 months old. Kisses from mom Pika and brothers and sisters! Well done!!!!!!!! We are very proud of all the successes of Pika and Rupert's babies. 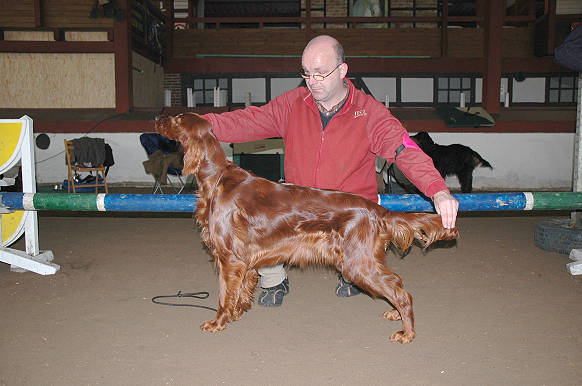 And a more recent photo by my friend Kasia Czapla in Dortmund last year:… 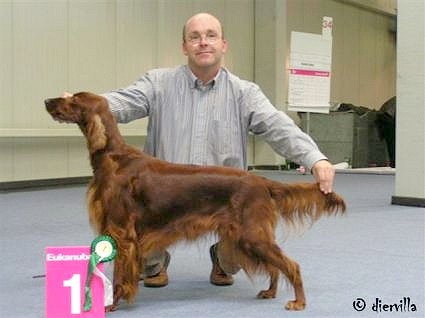 M'Eudail "A" litter at 8 weeks old 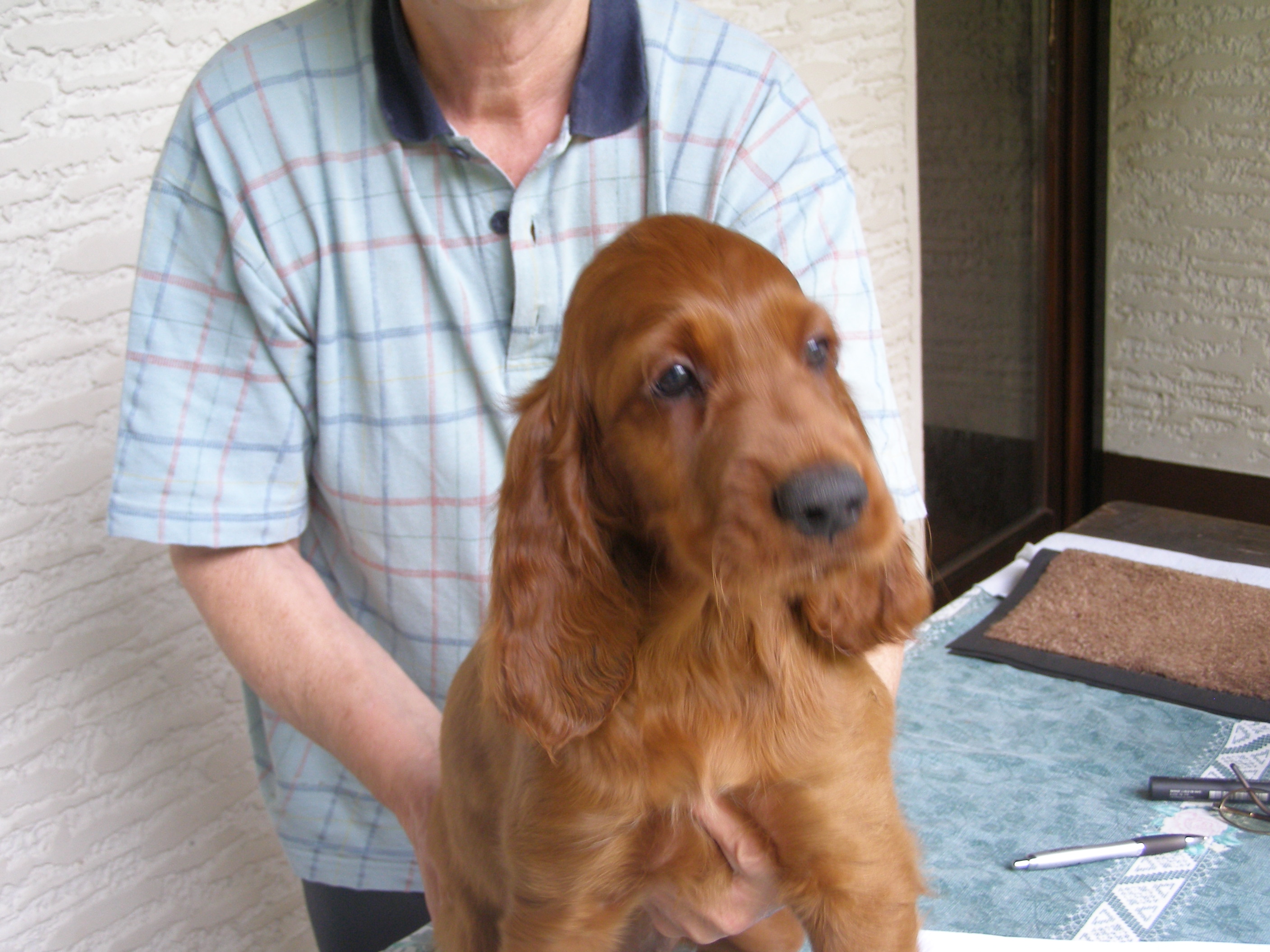 The first of the pups are leaving this weekend so I made photos of all of them. Some were more cooperative than others. I've put the photos into an internet album. You can find them at http://www.moj-album.com/album/12372065/