I only have the one Setter (not sure my brain could handle the thought of two of them! :-D ) but he is a special boy.

This isn't a discussion, just a bit of a happy post after taking some photos that show just how lovely the Red Setter is :-).

Harley was bred by Brabrook Irish Setters and although he was very testing as a puppy, I don't regret having him for a single second.

If these photos don't prove what a gorgeous nature the Irish Setter has then I don't think any photo will! The rest of the photos are on my profile as I don't want to clutter up a thread with half a dozen photos :-)

This is Bluebell, my English Giant rabbit and Harley together in the garden. They are the best of friends, he 'helps' me clean her out by sticking his head in her cage and saying hello to her and stopping to say hello to her when he passes her cage.

I have a Field Spaniel and I would not trust him an inch with Bluebell and bizarrely, she must pick up on the vibes as whenever he is around her cage, she shrinks to the back of it and stays well away from him. When Harley is around, she will bound up to him and stick her nose through for him to lick :-). 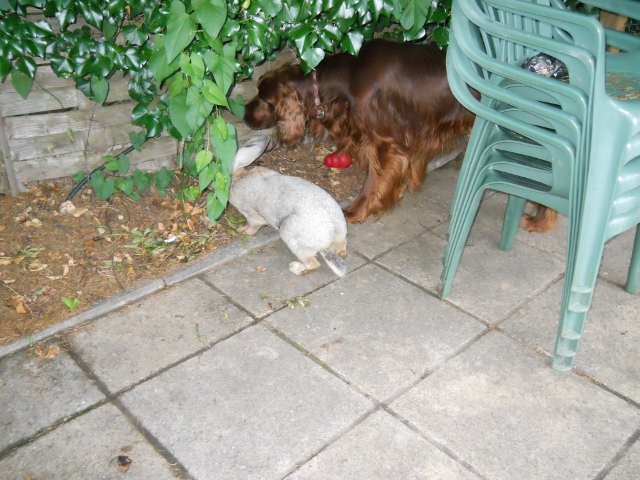 Absolutely gorgeous. We had a guinea pig called Chip when the boys were young who was leader of the pack. Only nose to nose through the cage or on my lap. No where near as friendly as Harley and Bluebell. What a pair.

They really are a special pair. I've never known a rabbit be so content in the presence of any other animal, let alone a dog! :-D.

Beautiful Bluebell! and Harley of course!

Nice to see they are good pals.

I bought a baby budgie only a few weeks ago and wondered if my dogs would be overly curious when the budgie moved around the cage. I am happy to say they have been so gentle when they approach the cage that my baby budgie now comes down and presses his face against the bars and touches the dogs noses with his beak.  They just wag their tails.

Setters truly are the best breed in the world :)

Does your rabbit eat the bindweed?

I have a Brabrook x Coppers young lady and if she does she's welcome to come and see if my Bella is as friendly.

She does eat some of the bindweed but not a lot so not much use as a weed clearer really! Hehe!

I have to say that in my experience with other Setters, Brabrooks really are something special :-).

Your situation with your budgie and your Setters is exactly the same as Harley and Bluebell. Amazing how smaller prey animals seem to pick up that Setters are very gentle :-). Harley just wags his tail when he sees Bluebell too :-). It is wonderful, Setters seem to want everyone to be their friend! :-D.

Thanks Susan :-). Harley is under the full belief that he is the most stunning dog on this earth, an attitude that every Setter I've ever known shares ;-) :-D.

Your photos are so cute. We have a Brabrook  who is the loveliest and gentlest boy too.

Thank you Nick and Sue :-). After you saying that you have a Brabrook boy, I went and had a look at your photos and I am stunned at the similarity Merlot has to Harley in some of the photos! Some of the ones where Merlot is sleeping remind me so much of Harley :-) There is something about the head and expressions that is very similar and familiar :-).

If you don't mind me asking, what is Merlot's breeding? Would be interesting to find out if Harley and Merlot share one or the same parents :-).