Unfortunately my English Setter, Hobson has been seriously ill again. His temperature went up to almost 41 degrees last week, his appetite was very poor, his digestive system a mess and in addition to his already serious immune and auto-immune problems, he had an enlarged kidney.

Fortunately Hobson’s temperature has now returned to normal and his digestive system has settled. However, he is a skeleton only weighing 30.7kg (his normal weight is 35.8kg – he is a large framed English Setter). Unfortunately one kidney remains grossly enlarged so Hobson has now developed kidney disease.

The vet who is treating Hobson is a decent human being. He wants to help. He has admitted he does not know exactly what to do because Hobson’s health problems have been mismanaged by other vets for many years. In addition Hobson has also been suffering from a neck injury since late 2010 which has resulted in serious neck/spinal/pelvic/hind leg problems which have contributed to his other health problems. Fortunately I persevered and took Hobson to see a particular chiropractor on 20 December 2013. Unfortunately there is a long road ahead to build up the muscles in the various areas of Hobson’s body and he now has serious arthritis in both hind legs.

Today the vet recommended Atopica for Hobson as a last resort. I thought it was a natural product. I have just completed research on the internet and was horrified to read that it is a similar drug to Prednisone which almost killed Hobson and is one of the primary causes of all of Hobson’s health problems. Atopica is a Cyclosporin drug and has been used to stop the human immune system from rejecting a transplant organ. I nearly fell off the chair when I read the potential side effects. I have cancelled the order for Atopica because suppressing the immune system in Hobson’s case has definitely not worked. Hobson’s immune system is barely functioning. He now has a grossly enlarged kidney. I cannot take the chance of giving him this type of drug again.

I would appreciate your opinions very much. I am in an extremely high state of anxiety. I am going against the recommendation of a vet who is trying to help Hobson but in my heart I feel I am doing the right thing for Hobson by not giving him this drug. I hope you can also reassure me.

Thank you very much  James, Catherine and Sylvia for noticing my words of distress and for your kind messages of support, and Barbara, Ellen and Karen too, and my other ES friends who have been worried about Hobson.

This is a photo of Hobson and Misty on 22 March 2014 when Hobson was very ill. I cannot bear the thought of losing my boy. I just cannot lose him!! 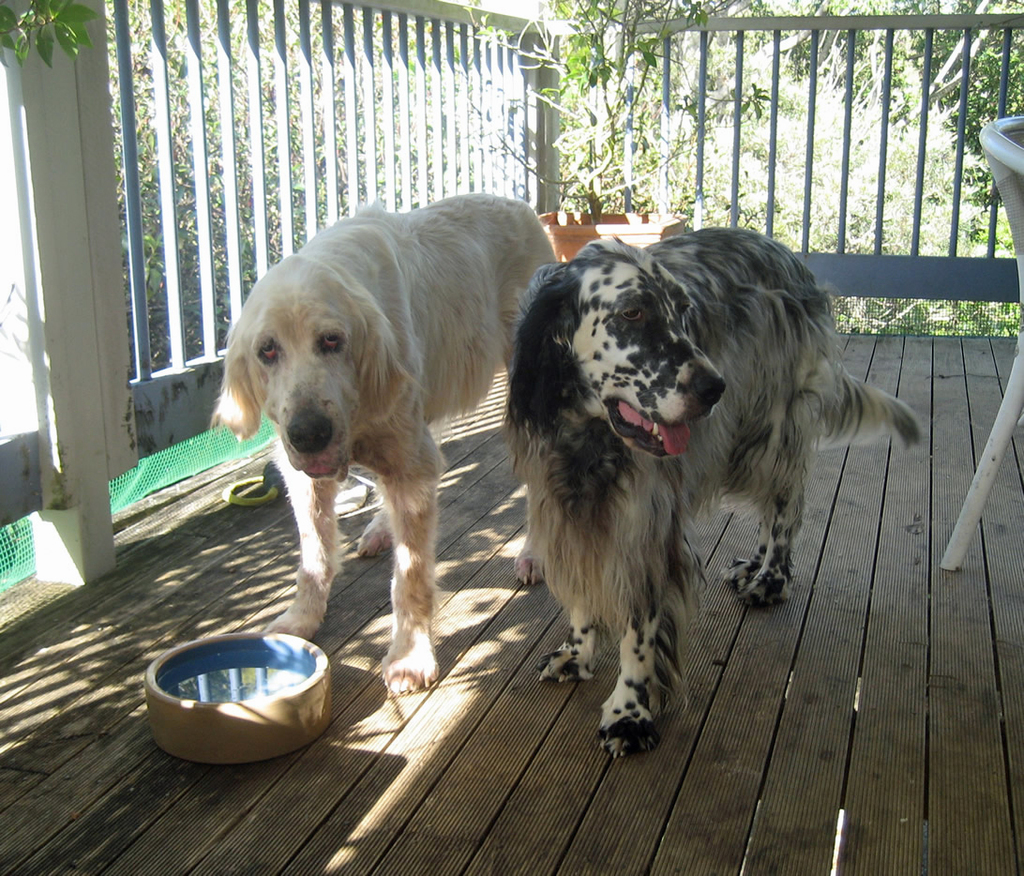 We went back to the vet and he understood my concerns about the Atopica. He had grave concerns that Hobson was going to die which is why he prescribed Atopica as a last resort. Since Hobson suffered GDV on 18 August 2009 I have never been so frightened of losing him. The fear and worry when Hobson suffered GDV only lasted 24-36 hours because Hobson recovered amazingly from the surgery. This time the fear and worry has continued for 2 very long weeks.

Hobson has surprised the vet because his grossly enlarged kidney has even reduced a little which he did not expect. Hobson’s temperature remains normal. His appetite has almost returned to normal. Unfortunately he has lost a little more weight.

Hobson’s major health problem now is that the bad yeast has overtaken his entire body and his immune system is so low he cannot cope with any type of detoxification, e.g. any type of probiotic. Hobson’s only hope now is that he will defy the odds and his immune system will recover. Just before Hobson became ill, I introduced Organic Turmeric into his diet to help him with internal inflammation as well as pain and inflammation from his muscu-skeletal injuries. After Hobson became ill I decided to also introduce Organic Rosehips into his diet.(I have seen the positive results of Rosehips with my horses for 10+ years). I am also giving Hobson daily Bovine Colostrum and Ester C to boost his immune system. 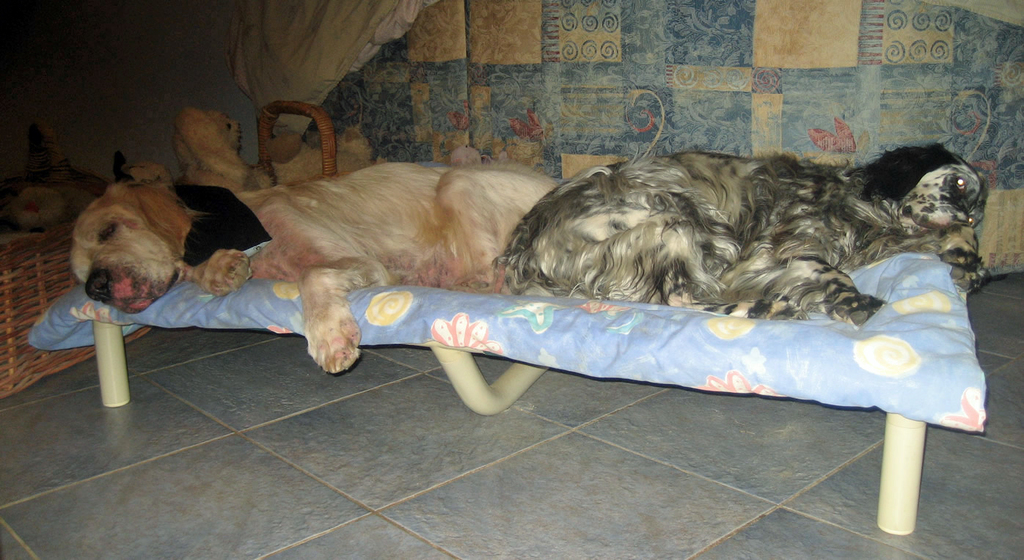 This is a photo of Hobson and Misty on the evening after we returned home from the vet. Misty is driving me nuts and I am driving her nuts! Hobson knows how much he is loved by both of us girls!

Thank you for caring about my precious English Setter boy, Hobson. I will let you know if these herbs help Hobson. One has to be very careful with herbs or any natural product because if the right herb or combination or natural product is not chosen this can harm your dogs as much as the side effects of drugs. I have finally found a vet who is prepared to support me like the vet who Hobson is named after who cared for my dogs from 1976-2008. Susan xxxx

Permalink Reply by Dianne cook on April 6, 2014 at 3:58am
So pleased Susan there has been an improvement, even if small :0) I think of Hobson often and pray he will be here for many more years. I have introduced turmeric, extra Virgin organic coconut oil with fresh cracked pepper for Shelby's cancer. And turmeric, micronised linseed oil and cracked pepper for our cruciate surgery furbaby and our daughters bi-lateral elbow Displasia Newfoundland.....we have seen definite improvements. And finally I have found good suppliers of quality oils and turmeric here in Australia :o). Take care Susan love to you and your furbabies...stay strong.xxx