Sporting group and best in show tonight, and you can find videos of the other setters by searching around on the site.

For those that do not know the dogs, "Emily" (GCH Shadagee Caught Red Handed) won the breed. She certainly stood out here. As far as I know, she's one of the few US Irish setters recently to have significant Best In Show wins -- she was third in all breeds the year before last, then took time off for puppies, and now is back. My boy has been Opposite Sex to her twice, but she and her handler have a real affinity for one another. She is a lovely dog -- and for the nay-sayers of US Irish. . .Emily does go hunting with her owners. ;-)

Its good to see her back.

thank you Christina for posting the link.

Wasn't sure whether to put this image from it in the discussion on movement or here - a great picture! 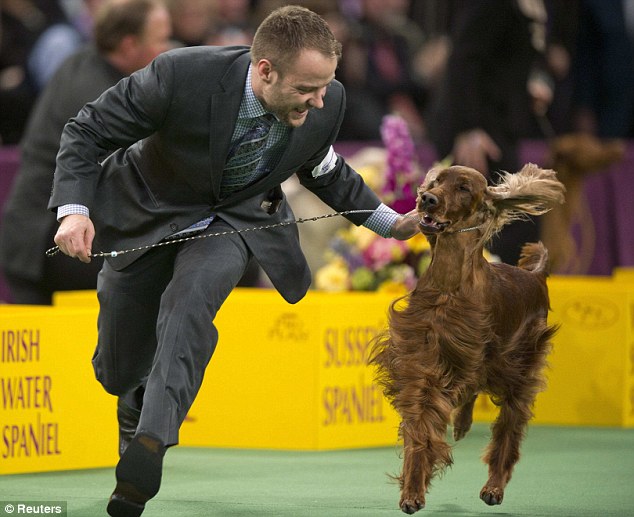 This dog is flying (all four paws are off the ground) and the handler looks like he is just about ready for take off!

Just the back edge of one heel on the ground between all six legs, carried forward on thrill-power alone.

It was a two-sire litter, and I'll be honest I can't remember right now. Yet another controversy as too many breeders are trying this and relying on DNA to sort things out after. Problem is, often the sires are so closely related you can't. Father & son, or brother & brother, all done by AI. You could probably find out by searching through the archives of Setters-L.

Tracy, is there a cap on each breed? Does it vary from breed to breed?  Is this because space is limited?  What would be the maximum number of Irish Setters permitted to enter?

It varies from breed to breed. Some, like boxers and golden retrievers have to have their numbers held down or the entire show would be devoted to them. Other breeds can scarcely get enough champions of record together.

It's also an old-fashioned benched show, so space is tight in the grooming areas. There's plenty of room in Madison Square Garden for the public to watch everything -- but you can see how tight some of the spaces are in the breed part of the Irish on the video. The groups and BIS are done in a cleared-out space, so there's lots of room.

I don't know the maximum number of Irish allowed to enter, but I do know there were some people who wouldn't enter because of the judge. The general poor quality of some of the competition is patently obvious, and no amount of bashing will get me to change my mind on that - some of those dogs shouldn't have finished their championships their conformation and movement were so poor for this level of competition. There are better dogs out there -- not just Emily -- and its too bad they weren't there. JMHO.

He did find the right one to send on -- Emily is a grand example by being quite moderate (under the US grooming!) in all ways and very close to the standard, and she does love to show. She hasn't been in the ring since the end of 2010.Having seen her in the flesh on a number of occasions, I was pleased to see her, and pleased to see her so happy to be back. Adam and she have a good relationship - I like that he lets her be free on the lead; all too often some of the professional handlers have an absolute strangle-hold on the dogs, and I really dislike seeing heads twisted to the side because of a too-tight lead.

The Sporting Group video should also be on the site, and then also the BIS video. THAT has been a bit controversial, as the Peke won over a very nice collection of group winners. There was a lovely doberman, owner-breeder handled that I particularly liked. But the Peke, not my breed by any stretch of the imagination, also has some 150 or so BIS wins, so he's clearly no slouch.

Some may also be interested to know there is HUGE discussion going on right now about the scissored/sculpted presentation of many of the setters (most NOT in favor).

But you are all welcome - Westminster does this every year. And thank you Jean for posting the lovely photo.

I am pleased to read that there is a discussion on the presentation of the Setters.

I really don't like the scissored/sculpted look at all and I am glad many others don't either.

Christina, I think it is a great shame that people view the Irish Setter video and assume that it is an accurate representation of American dogs when the entry is so small.  I have never been to Westminster but years ago I went to the National Speciality when it was held in Massachusetts and where the entry was over 500 dogs taken from right across the US.  There were very many lovely dogs.  Ch Shawnee Pipedream O'Charlton went BIS.......that's how long ago it was.  Dogs were not scissored/sculpted as much as they seem to be now.  Since then many of our Irish Setter breeders have been over for the Specialities and come back with an altered opinion of American dogs.  Always best to see in the flesh before making judgements.............

Interesting that you call benched shows old fashioned........all our championship shows are benched.  With the entries we get it would be chaos without them!!!

Our benches.......I suspect they are different from yours.  They are put up by specialist contractors.  We bring our own beds and chains.  The dogs just go to sleep.  Hands free for us!! 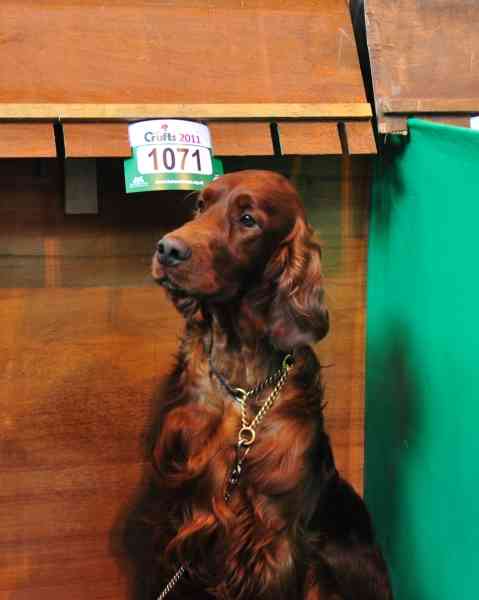 We do have unbenched Club shows to which we bring soft crates and that works pretty well too.  We do all our bathing, preparation etc the night before and just put the finishing touches to the dogs before we go in the class.  We, as a breed, don't use grooming tables but grooming areas are provided for breeds that do and they bring all their own equipment.  We tend to groom by our benches.

I agree with Mel, Crufts can be a worry and we have to be vigilant.  I caought a member of the pupblic trying to feed one of my dogs once.  Luckily there was nothing sinister in it but you do have to watch.

The UK breed standard states that the tail should be of moderate length, proportionate to length of body, set on just below the level of the back, strong at root tapering to a fine point and carried as nearly as possible on a level with or just below the back.

So that is why we hold our tails the way we do because for us the tail is an extension of the back.  As you say, it's all in your eye and what you are used to.  When we look at the way you hold your tails in the stack we think you break that line.  So there you go.....two trains of thought with two different explainations but both valid.  We also do tend to penalise high tail carriage and many otherwise good dogs have not made up for that reason.