Noa and the siblings did great at Imatra show 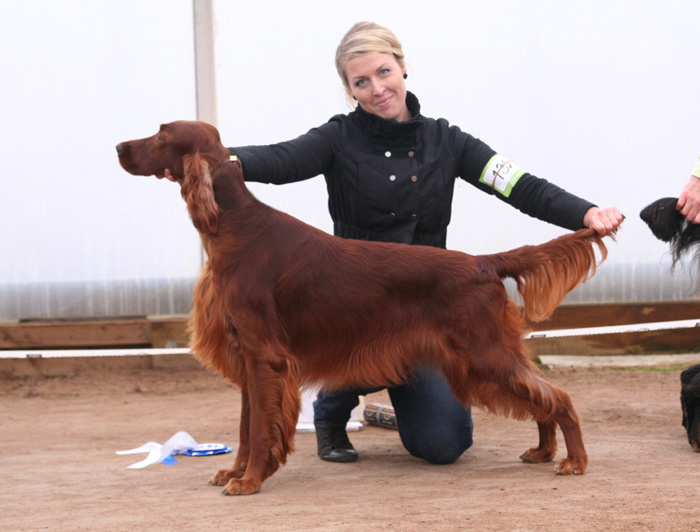 Our youngsters did great at Imatra speciality show.

My love Red Rhythm's Bass Booster "Noa" (pictured above) was placed BOB, CAC and BIG-2 out of intermediate class.

We have a new familymember

We are very happy to introduce you to our new girl - Avon Farm Summer Wind!
She came to us all the way from the United States. She is co-owned by me and Pauliina Artiola at Original Irish Setters. 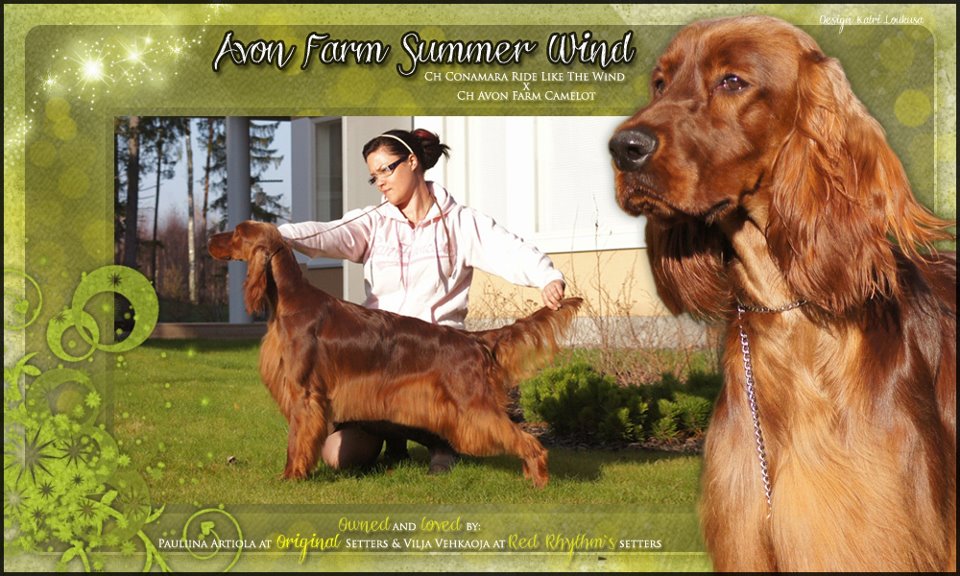 She is such a lovely personality and I'm sure I'll have many happy years with her. Now she's…

Maybe just once in a lifetime...

My Darling Balou (C.I.E. LT CH BaltW-08 Kanelin Make The Cut) turned 5 years on Aug 22nd. That also meant that our co-owning ended and he retired from the showrings as I let go of my ownership of him.


Thanks for Teija Parkko at Kennel Kanelin for this amazing dog! Thanks for Tanja Raikkerus for always…

We had some incredible shows

We have had some truly happy moments in the show rings in the last 4 weeks. Take a look at our four group placements, two CACIBs and five CACs. Thanks for all who shared the moments with me!

The Red Rhythm's C-litter has grown into beautiful pack of true irish setters. Two of them have found a home at our own team and the rest are moving to the world to be loved and cared for by other owners.

We still have three puppyboys available. Two very promising ones are looking for someone to love them, take care of them and take them to some shows.… 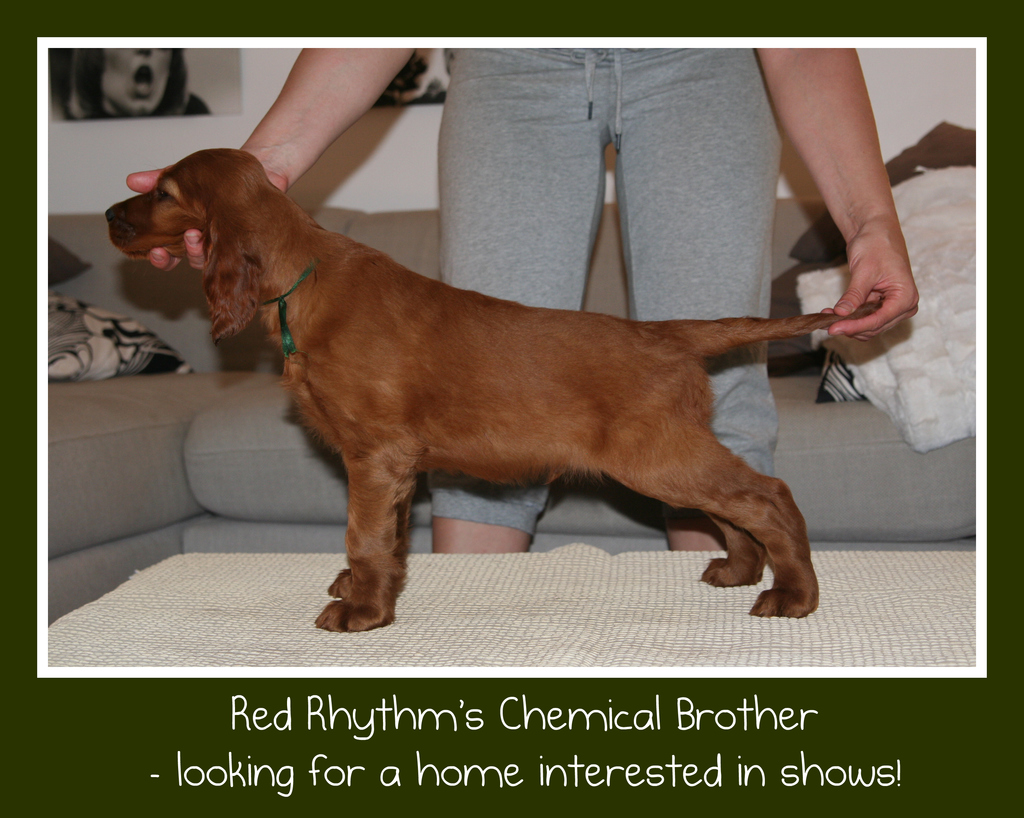 Our home is again filled with little red ones! 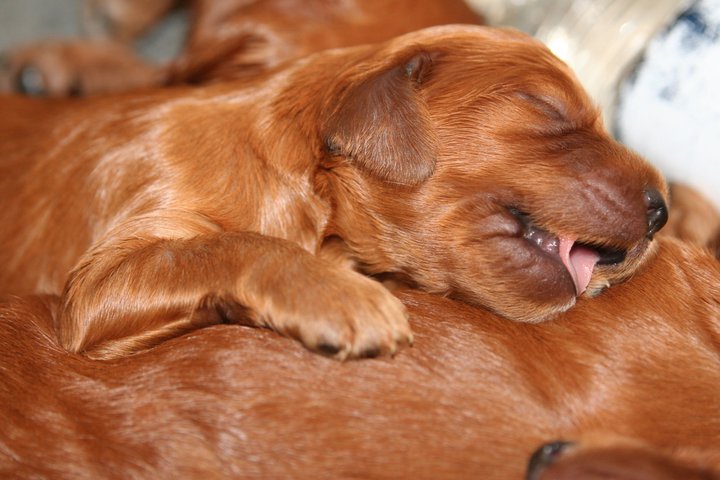 We have eleven beautiful puppies. They're already two weeks old and starting to walk. Their eyes are open and they're starting to become adoring personalities. What a joy!

Puppies on the way! I'm really hoping to combine some of the best features of brittish and australian lines
in this litter. Both of the parents are healthy, beautiful and bright dogs.

Lyyli has been in ultrasound and we have a rather big litter coming.…

We had such nice succes in the "Best Irish Setter of the Year 2010" competition.

Hippu (Red Rhythm's Bootylicious), who has just got a new title Helsinki Junior Winner 2010 was the Best Puppy in 2010! 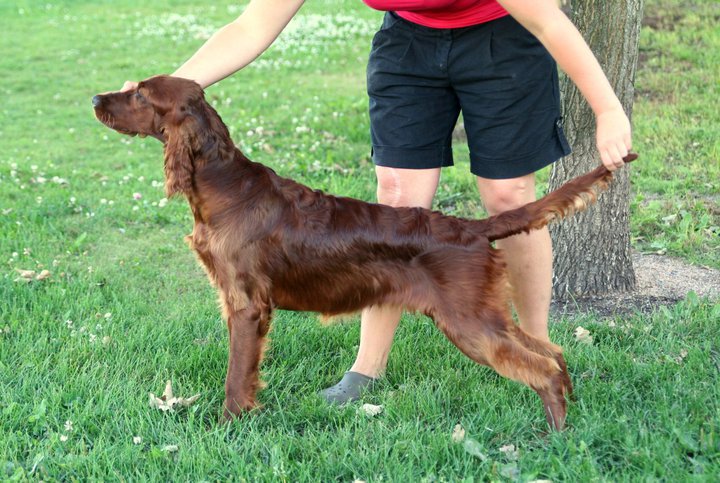 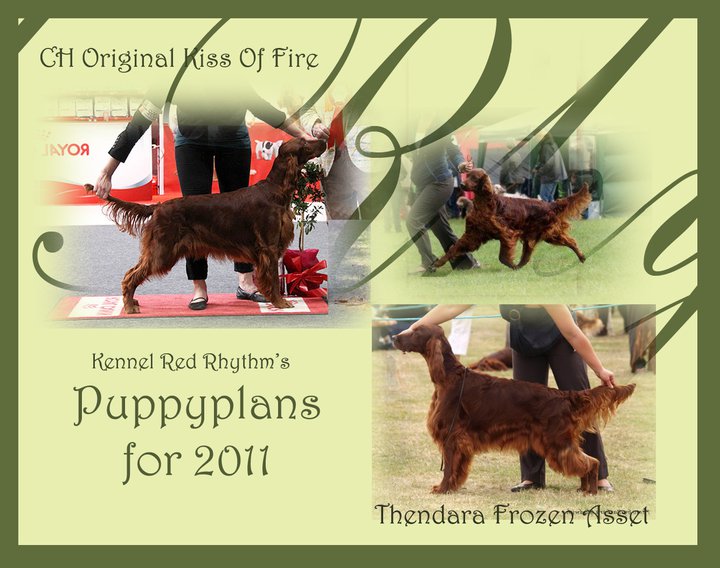 Daddy and the kids at Hyvinkää Group Speciality Show

At Hyvinkää show we had a nice day with three kids and the dad. Daddy showed a nice example by placing himself BOB under mr. Laszlo Erdös. 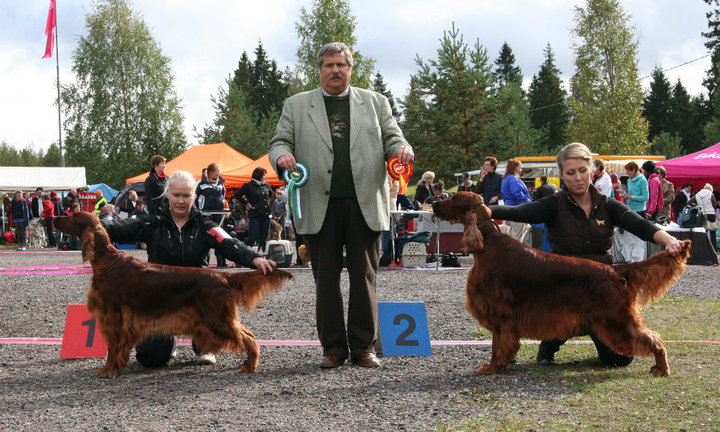 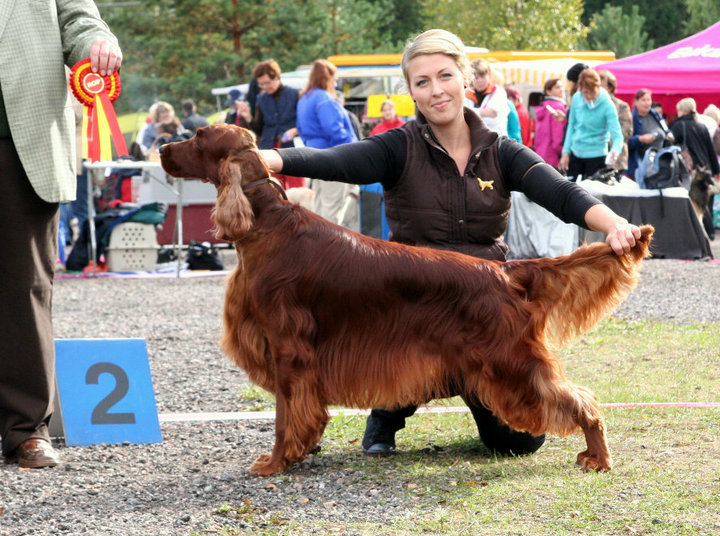 The kids didn't do bad either. 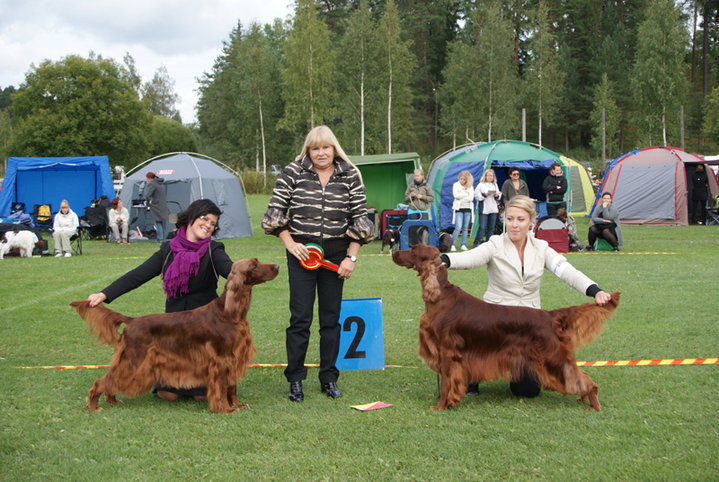 So many show news to tell...

It's been a while since I've written here, so where do I begin...

BALTW-08 Kanelin Make The Cut "Balou" did it all in Moletai, Lithuania. By the result CAC, CACIB, BOB, BIG-1 (judges: Leif-Herman Willberg, Norway and Joe Aramis Joe Lim, Australia) he became Lithuanian Champion and C.I.E.!!! I couldn't be any happier!… 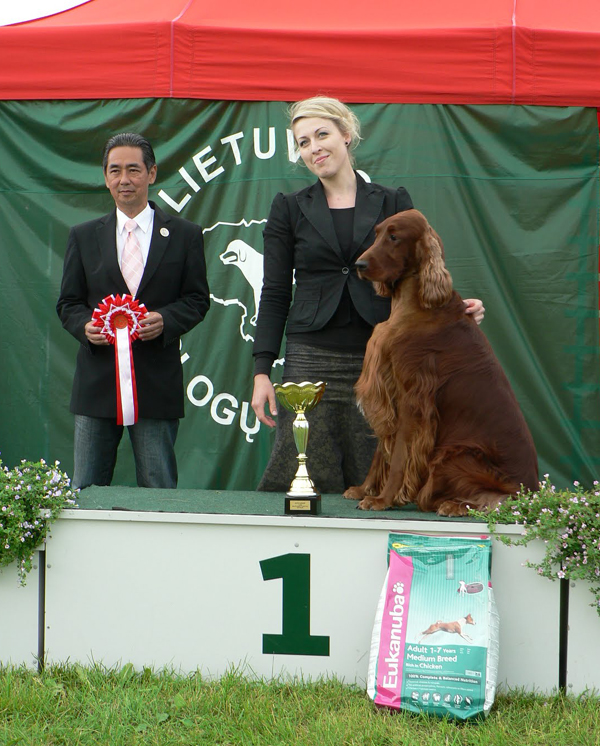 The puppies are taking over the world!


Time has gone by very fast and the B-litter is leaving to their new homes. All the best to the little ones! 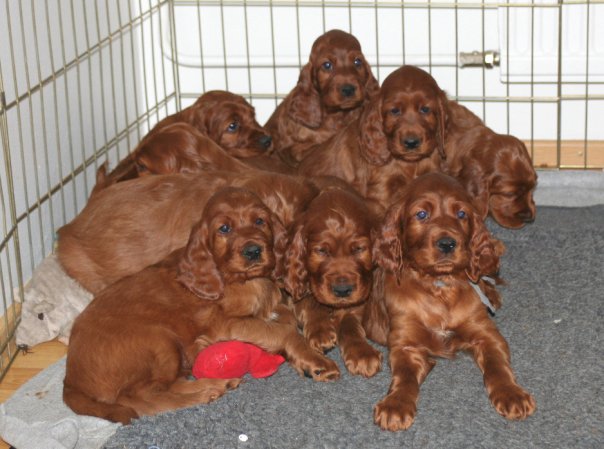 Here are some stacking photos of the B-puppies. 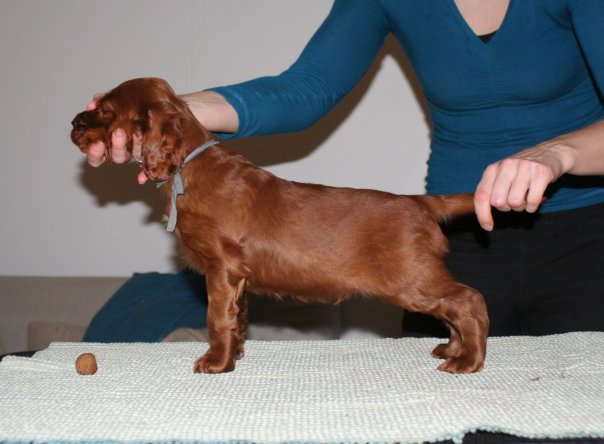 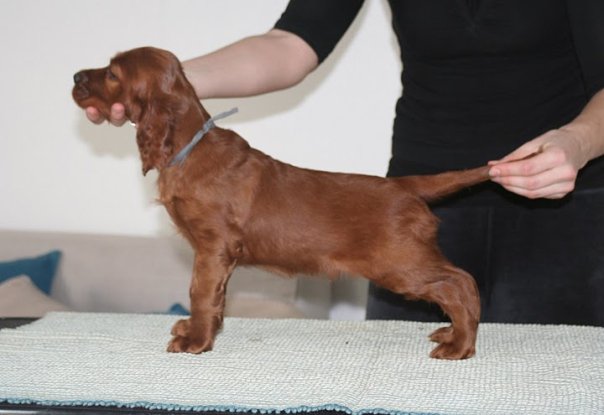 Balou (BALTW-08 Kanelin Make The Cut) made my day and won BOB, CACIB and at the end of the day BIG-1 at Turku International Show last weekend!
The judge in the setter ring was Harry Vella, and the group was judged by Joao De Paula Bessa. 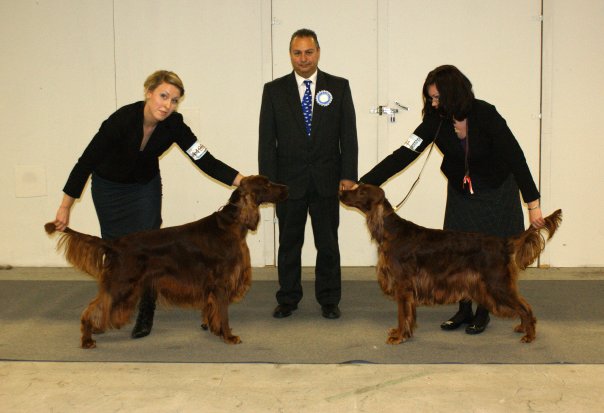 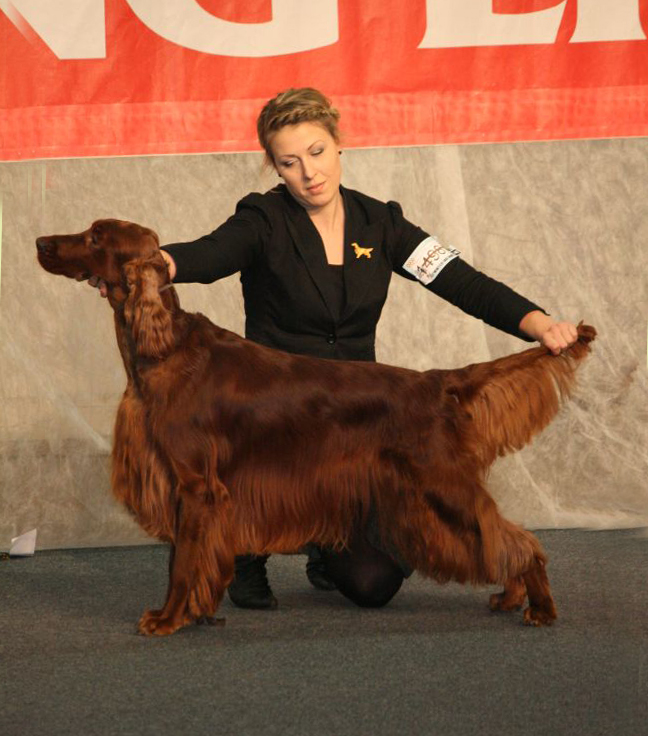 Tessa's and Balou's puppies are here!

We are happy to tell that Tessa has given birth to ten lovely puppies a week ago. There are five adoring girls and five handsome boys in the whelping box. Tessa is a great mother and takes care of the little ones faithfully but in a laid-back manner. I just love the whole red family! 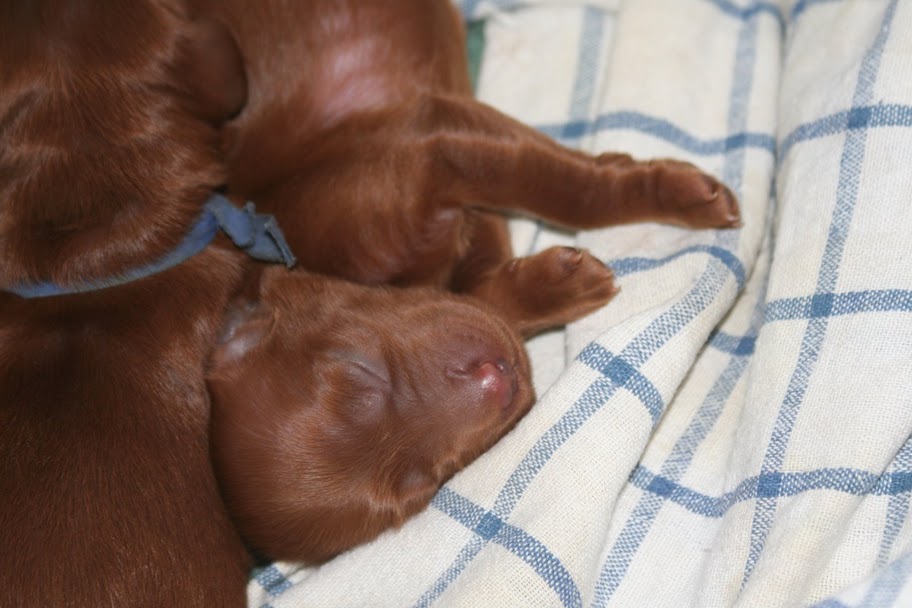 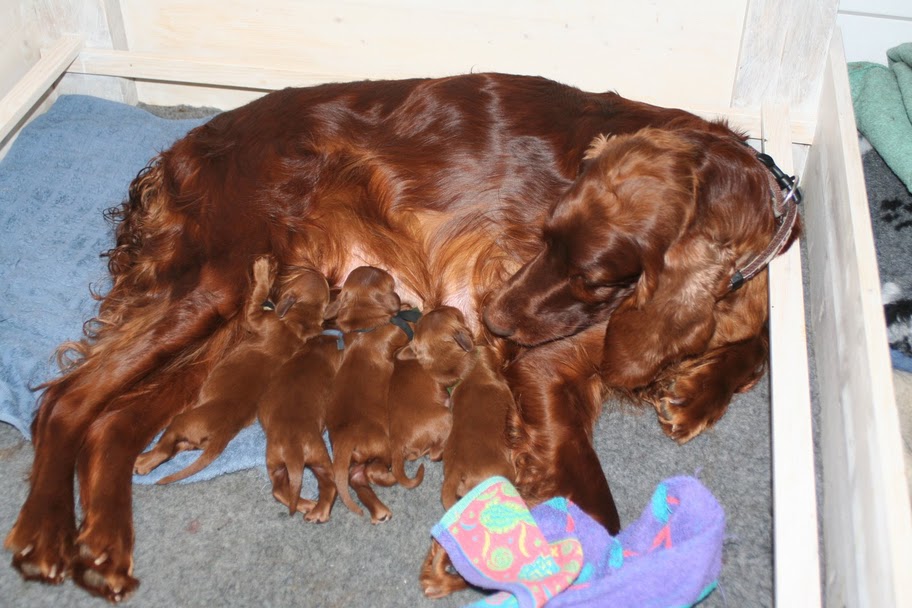 Father Balou has taken the news of so many babies… Continue

We are going to have puppies! 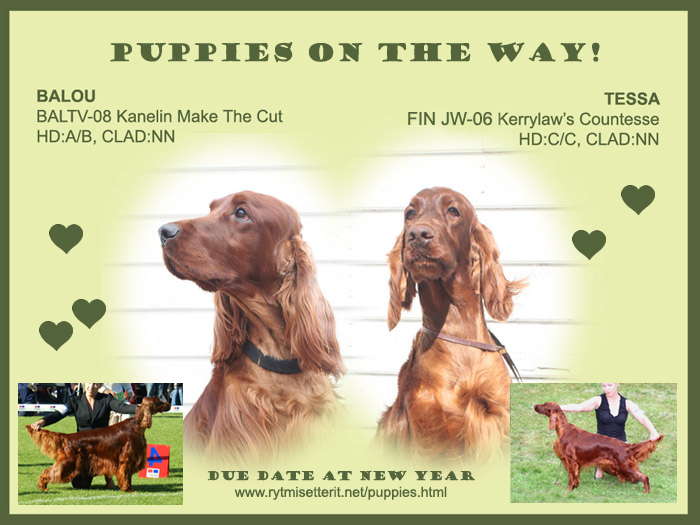 I'm so happy to tell you that Tessa is expecting. I've been waiting for this combination of two perfect sweethearts <3

Balou and Lempi did well in the group rings

My red darlings Balou (BALTW-08 Kanelin Make The Cut) and Lempi (Original Kiss Of Fire) have made me really happy in the show rings lately. 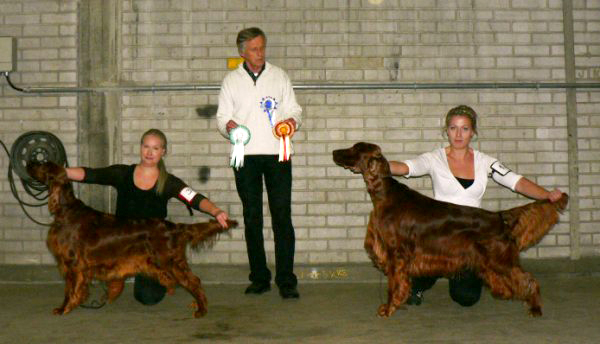 Balou took BOB and later on BIG-2 in a combined FCI 7/8 group in Valkeala show! The judge was Paavo Mattila from Finland. Lempi was BOS-puppy in the same show!
BOS was Fansett Jet Set Lady (Photo: Sari Ritari)

The Finnish Kennelclub has just got our teenagers' HD results ready.

The rest of the results are still on the way, but this is already a reason to celebrate! 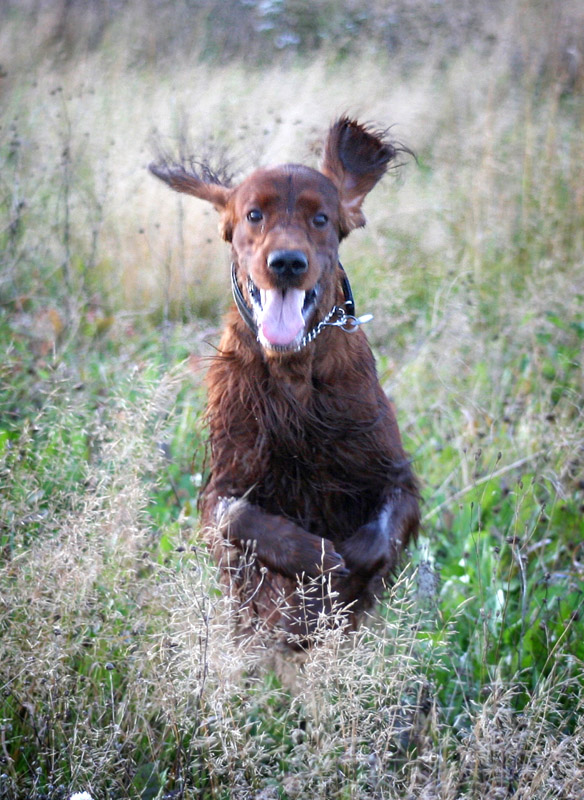 Boo is also happy for his result... 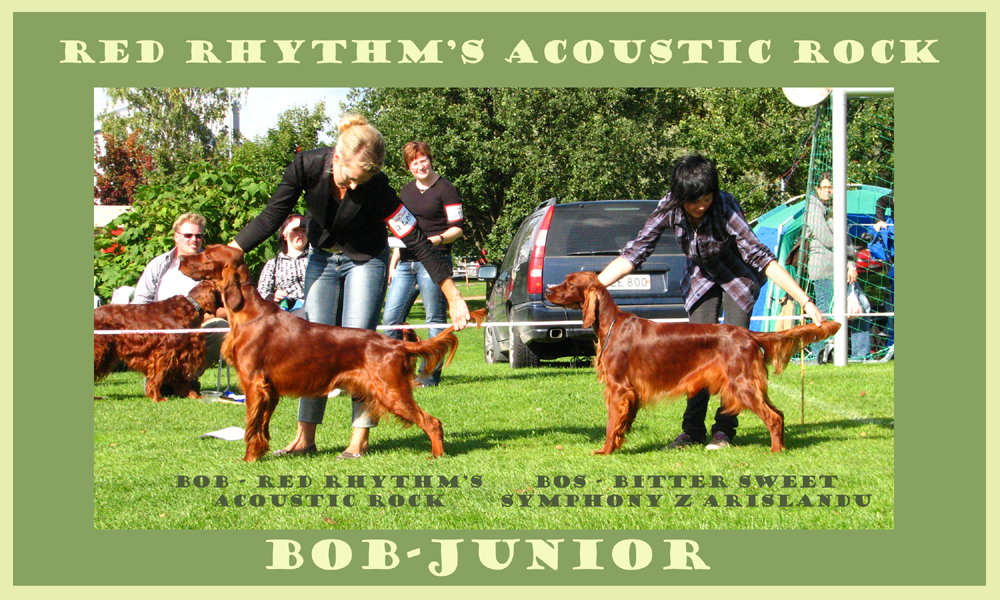 Red Rhythm's Acoustic Rock "Eppu" was in his 3rd show ever in Porvoo Show and did very nice. Eppu won the big junior class (7 junior boys) with excellent. In the big Best Male -ring the judge Michael Forte from Ireland placed him 3rd and gave him res-CAC. Eppu was also placed BOB junior! The judge said he loved this little man to bits, and I was very pleased to hear that :) BaltW-08 Kanelin Make The Cut "BAlou" was EXC2… Continue

We travelled to Tallin for the Baltic Winner 2009 show. We had such a nice and sunny day and met so many old friends! Thanks for you all :)
BALTW-08 Kanelin Make The Cut "Balou" did nice in the ring and won his class with the estonian CAC. The final result EXC1, CAC, Best Dog 4 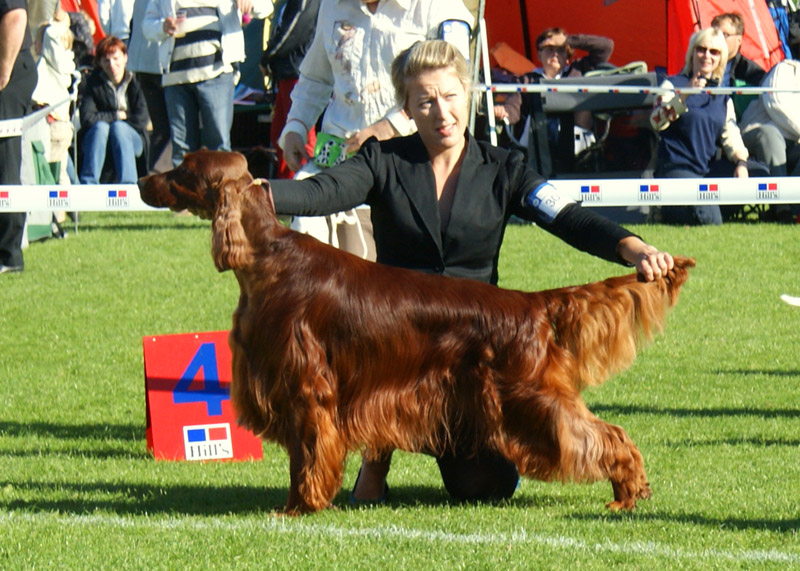