How often between seasons

Molly is 19 months. She had her first season in November 2010. At the beginning of July this year she came into season again. I put her in her usual kennels because it was to much having her here for my reasons. she has been home for about 10 days and two days ago I noticed the same symptoms as previous as to being in season. She is swollen and has a bloody discharge. This is not what I thought would happen. I have spoken to the vet and he said sometimes this can happen when the seasons (weather) change. We have exceptional warm weather in Sydney over the last week for August.

He also said because she is only young could be a factor.

Any information you have would be helpful. Just asking for help as I am concerned about Molly. She does not show any signs of sickness as such.

I would not call that normal, but I'd wait a bit longer and see what happens, your vet is probably right - it's either the weather or her age messing with her!

I'm actually not the right person to talk about normal seasons. My cocker Ginja always had very irregular seasons - she would go 2 years without a season and then have 3 seasons in 3 months, then another one after 6 months and so on - we could never tell when she was going to be in heat and could never get her pregnant either. Eventually her estrogen levels got too high and I decided to spay her - nothing happened until she was 7 and she was not sick - the only thing she had was a major coat change.

Pitanga had very regular seasons, almost to daily precision, every 6 months and had no trouble getting pregnant. Saddly for health reasons that did not concern her reproductive system I opted to spay her to get her immune system stable. She also had a big hernia from her first pregnancy that made it dangerous to breed from her again.

Romã is going to be 2 years old in a few days and is not thinking about having her first season any time soon, so that's another bitch that is not "normal" in my hands...

If you notice any changes in your girl, or if she has a another season so close, then I'd get worried - watch her coat as well, estrogen changes normally messes the coat, so that could be a good clue if anything is going wrong!

Permalink Reply by Eunice Marott on August 6, 2011 at 4:03am
thanks. The coat thing and incontenience in past IS is the reason she is not sprayed. But I don't wish to go there. Thanks for your input I appreciate it.

I'm sorry I was not a bigger help!

I'm just concerned you misunderstood me in something - My cocker had the coat change before she was spayed - that's what made me suspect there was something wrong with her to begin with!

What I meant was to tell you to pay attention to these kind of changes now, as well as behavior changes, because they can be caused by hormonal problems.

When Ginja had her coat changing it never crossed my mind that it could be related to her ovaries - once she was spayed she got back to normal and her behavior got stabled - we did not realize how moody she had become until she was all better!

I understand why you don't want to spay your girl, and truly hope you never have to, I'm not a big fan of spaying girls either! Just have not been lucky with my girls lately, and if its a matter of keeping them healthy, then I'm all for it!

Hope anyone else can be of better use to you!

Permalink Reply by Eunice Marott on August 6, 2011 at 9:36am
you were fine. I understand about the coat. Thanks again

Permalink Reply by Eunice Marott on August 18, 2011 at 6:32am
looks like Molly had a split season. Now finished today after 2 weeks and I think the other week was at the beginning of July.

Permalink Reply by colette tuite on August 18, 2011 at 8:00am
I have heard that sometimes an animal will reovulate if fertilization has not occurred.This actually happened to me with my last Pointer litter. I had had her swabbed and been told to get her to the stud dog straight away.I live in the south of England and the stud dog owner lived in Manchester and we had terrible snow which was a lot worse in the North of England and I am afraid of driving in the snow.This was the only chance of Breeze having puppies as she would have been 8 years in the May.
Anyway off i went and actually got a mating from the maiden dog so i was pleased .The stud owner offered to keep Breeze for the week .As the week went by the dog did not have any interest in her during subsequent days.By the end of the week Breeze became more swollen and the dog renewed his interest in her and mated her again at the end of the week. The resultant puppies were born from the last matings and not the first ones.So i was very lucky the stud owner kept her for me , otherwise i would not have had any puppies!

Just goes to show you can't rely on there being a definite periond for ovulating and mating!  I have a bitch now in whelp, due end of the month, and she was mated on the 23rd & 25th day of her season!!!!

I did ask my own boys inbetween times - well it was a bit late in the season, but as they weren't interested either, I said ok we wait;

There you are and on the scan we see at least 8 puppies;!! 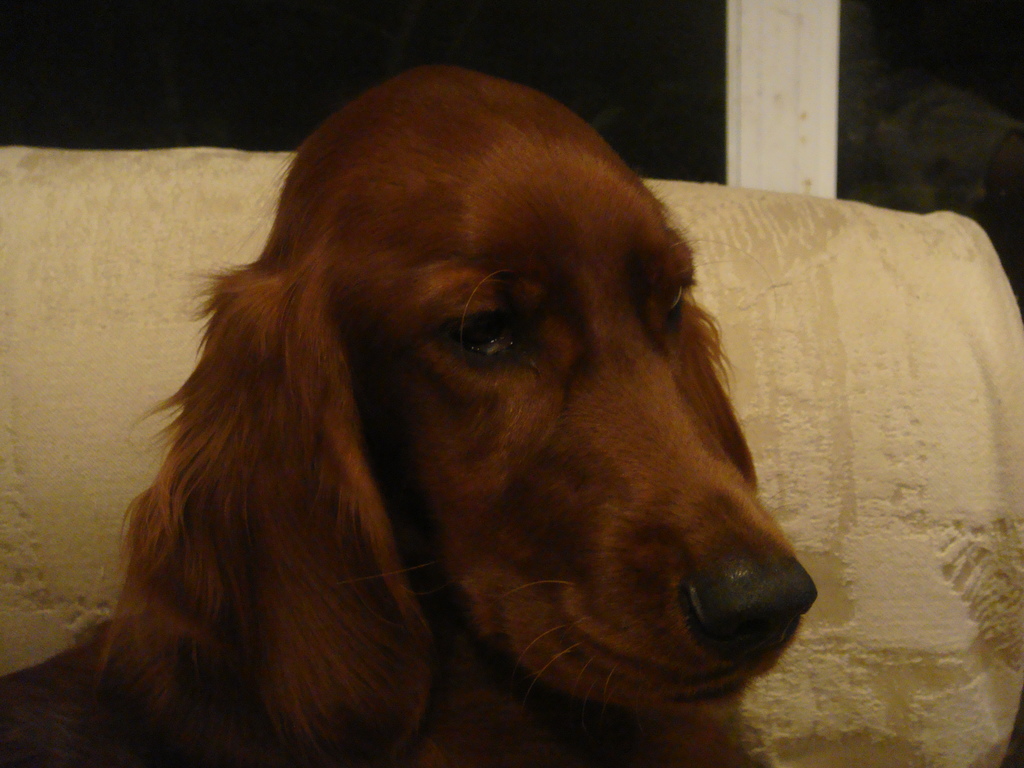 this was taken last april. Too hot here today to find any more photos but I think they look a little alike. High 30 degrees nearly 40 which is hot for us being so close to the ocean. hopefully a cooler day tomorrow.

Permalink Reply by Carmel Stringfellow on January 4, 2012 at 3:46am

thank you for your Christmas wishes. Annabelle, Molly's sister, has finally come into season again at 2 years and nearly 2months of age. It is only her second season. I have tested both her and Mac for rcd4. Unfortunately Mac is a carrier but Annabelle is clear. I am seriously thinking of mating her this season as she is obviously a '12 month' bitch and she will be three the next time she comes into season. I feel that she is a bitch that will benefit greatly from a litter.

Much cooler here than your way. My son and his wife are heading home to Sydney tomorrow so I don't think I will tell them about the heat.

Will let you know what happens with Annabelle. Obviously if she has puppies she will not be coming to Sydney. But her father and her 'husband' will be.

you crack me up. Hope to see you and Annabelle's hubby