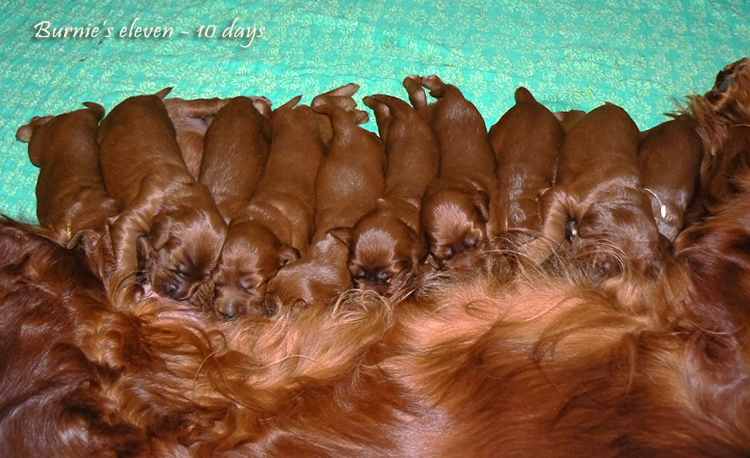 to the lovely Kerryfair Snow Fox JW have arrived!… 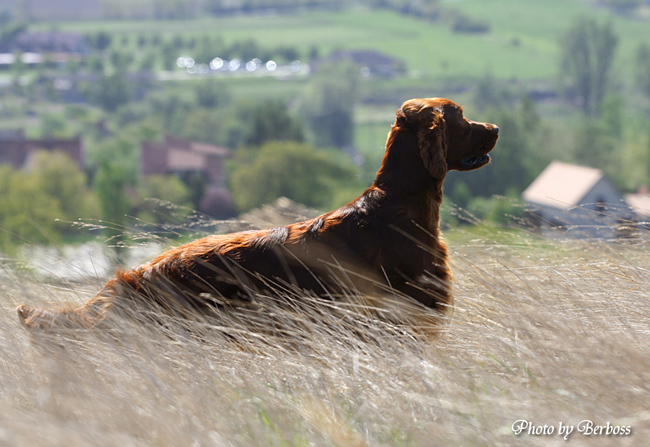 I am in a fever of joy again ..... another carefully considered plan, many nights awake, a trip to England to make the final decision, and another long drive to mate my girl to the chosen boy.…
Continue a Merry Christmas and a Marvellous New Year! 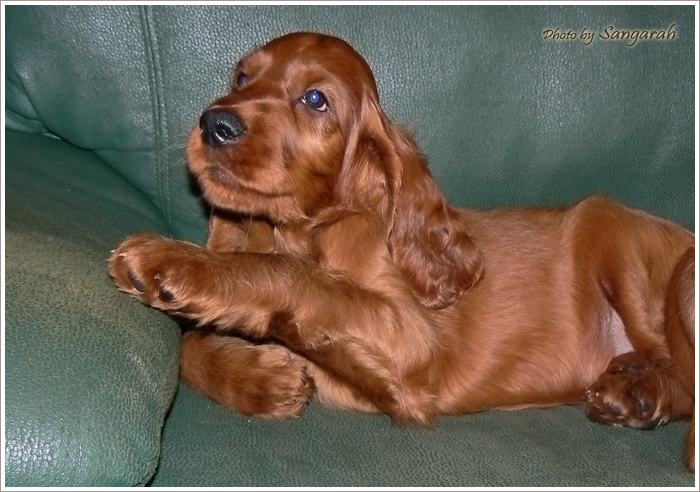 Look what I found in Serbia when I visited Nenad and his little puppies in Red Irish Dream kennel the past week. I was looking forward to seeing what they look like very very much, being the first litter sired by my Bono. Dam the most careful mommy Dess / Destiny Red Irish Dream.… 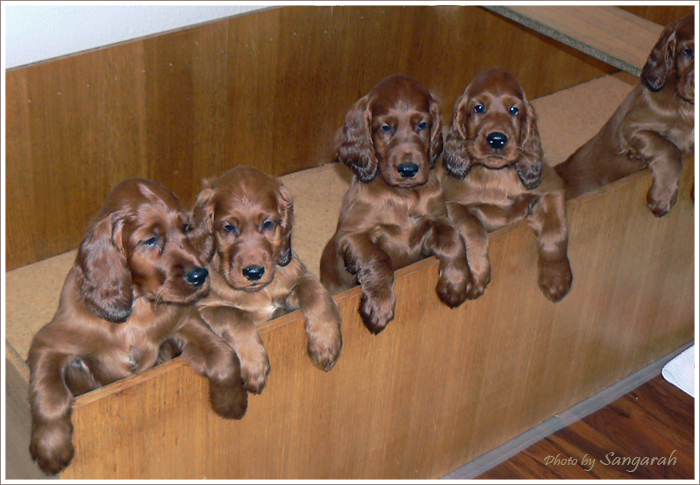 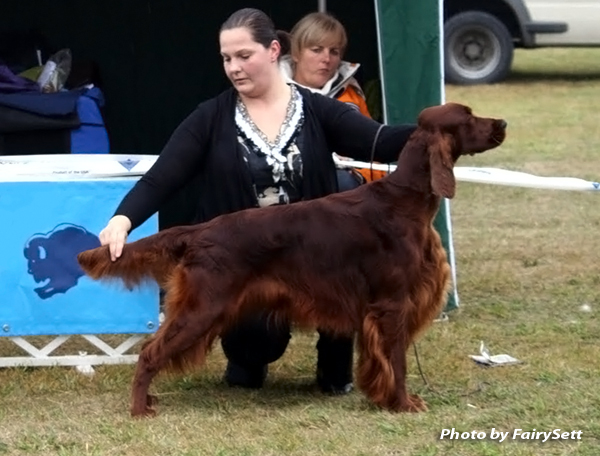 It was a double show, but I entered on Sunday only …… 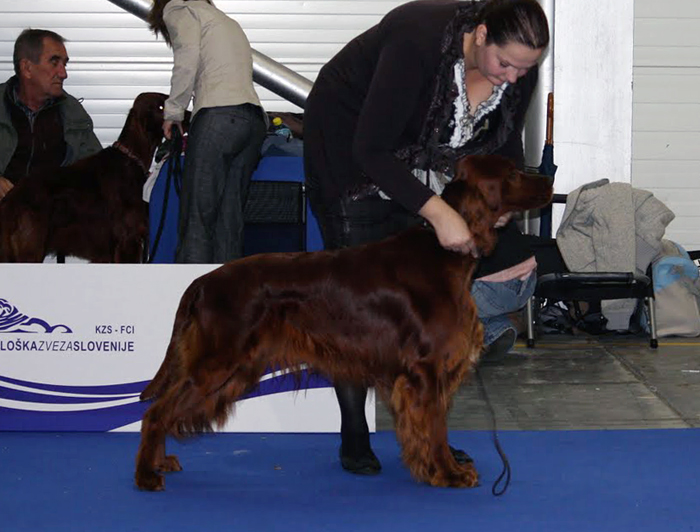 Only two photos that I have got so far, thanks a lot to Renata / Meldor-Sett for sending them over!
And may I ask you if there is anyone who may have some taken of my boys at…
Continue 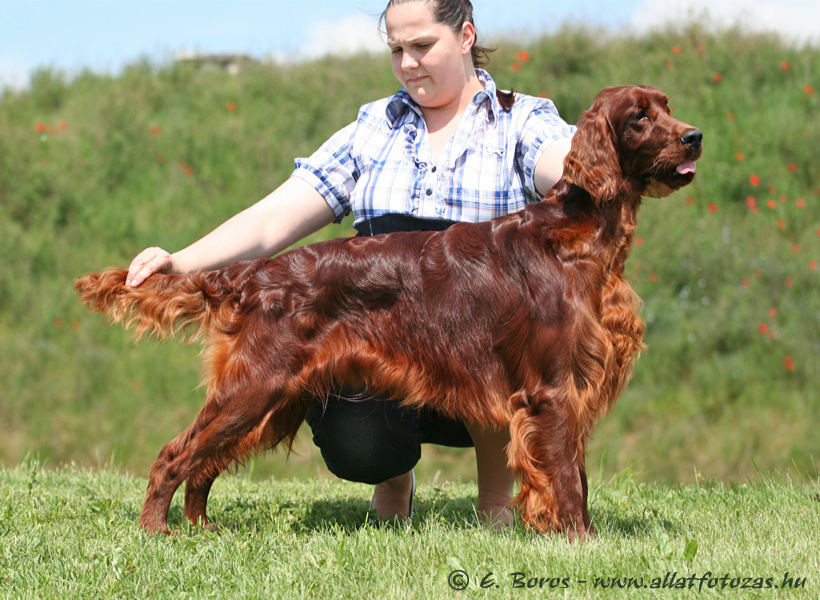 We had a three days show weekend in Komarom (Hungary), where 2 CACIB shows, and a Club Show for Setters were held. Lovely place, lovely sunny weather with a bit of summer rain the first day,…

Not a big number of entred dogs, but all looked lovely ;-) 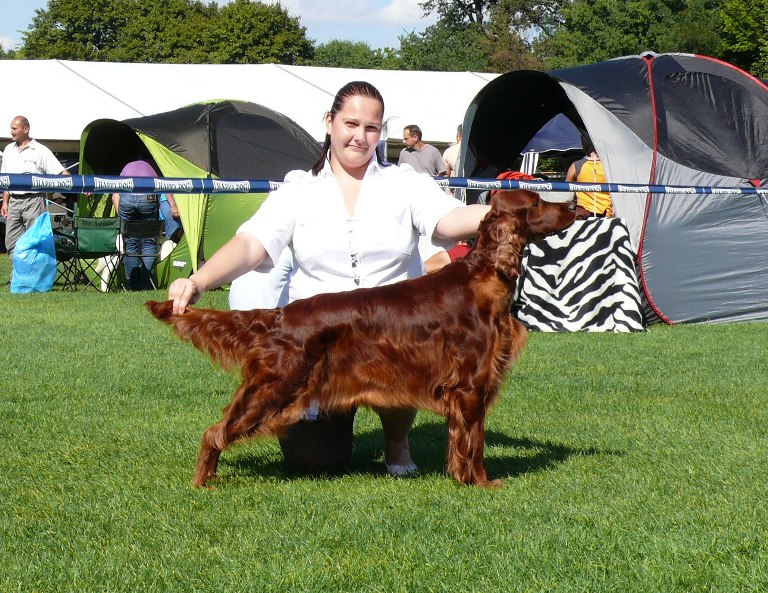 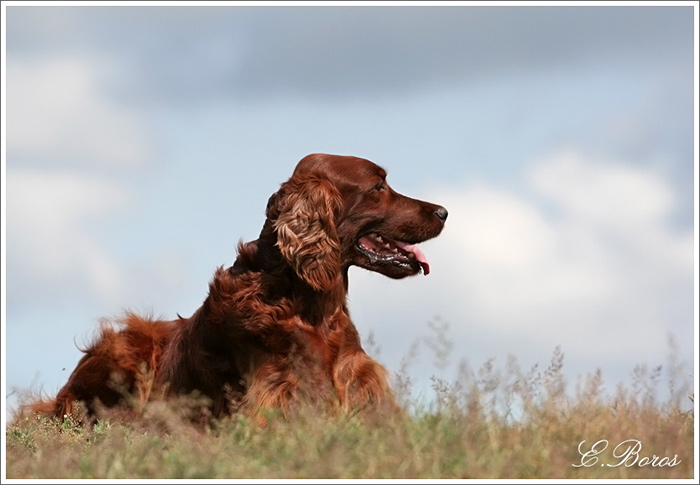 The 17th of July my Sarah turned 4 years old. „How time flies!” - as it is said by many of us when it comes to our darlings’ birthday. Well, difficult to believe, but those unforgettable 4 years have just gone so quick, included some periods of neverending waiting though - when a litter is planned and babies on the way for example :-)

To suit the occasion we had a photo session not long ago, so that you can have a look what my birthday… Continue

Finally here she comes, the bitch puppy I have kept from Sarah’s litter by ShCh Caskeys Concept At Aoibheanne JW. 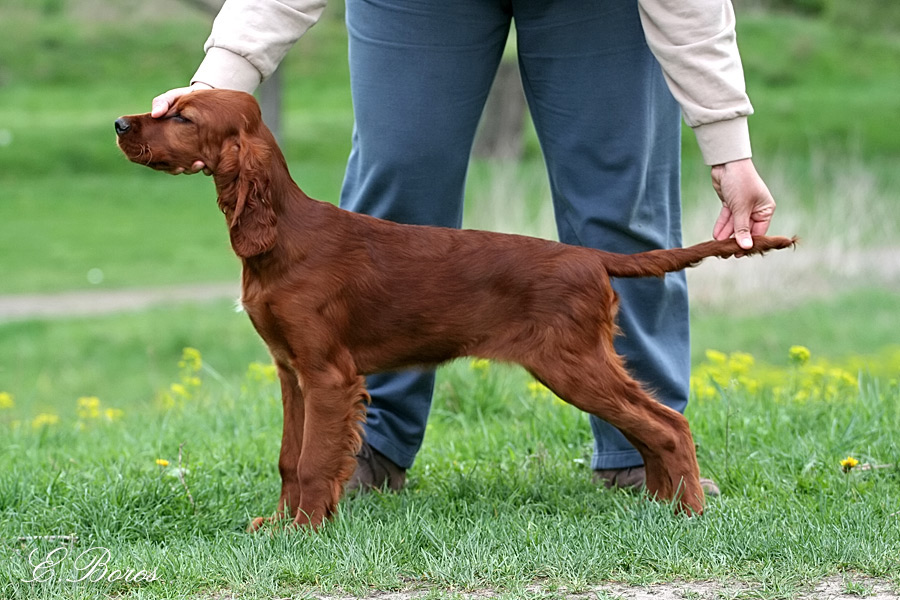 After long hesitating as usual, I changed my mind in the last minute and decided to keep Fire girl, however I was definitely in love with Water girl at the beginning – an angel she was.

Have some plans with both girls for the future, but Fire has the „look at me” attitude you need in the ring, so she just had to… Continue

Sangarah pups at 6 and a half weeks 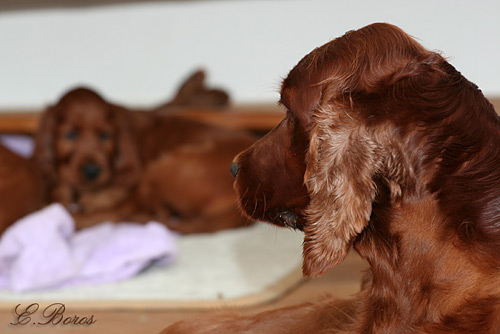 We have had a special guest this week who has got a super camera and is a talented photographer. Do you guess who she is? ………
Yes, Emese Boros visited us for a couple of days to take some gorgeous photos of the puppies and their Super Mommy Sarah. Babies are 6 and a half weeks old on… Continue

The Five Elements by Sangarah Irish Setters in Hungary :) The long awaited puppies of Sarah / Ch Shandwick Obsession & Louie / Sh Ch Caskeys Concept At Aoibheanne JW finally born the 28th December (last year).
Some of you have been waiting for this blog post about Sarah’s litter for weeks now cause I, the ugly, bad, lazy Marta haven’t let you know anything about the little ones and their super mommy Sarah.

Another weekend, another Champion title for Sarah :-)

The 6th and 7th September we went to Romania to the Dracula Show that is a double CACIB show, one of them offers a Crufts Qualification to the CACIB winners for 2009. 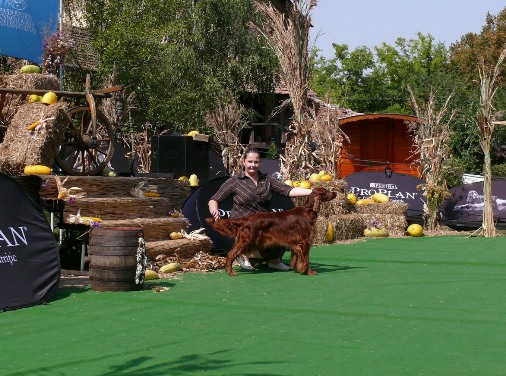 We got back with nice results again but once it was quite enough for a life time. You had better not go there, as the name and the homepage of the show is really fantastic, but that's all. There is not enough parking place for the cars, veeerrrry small and bad quality… Continue 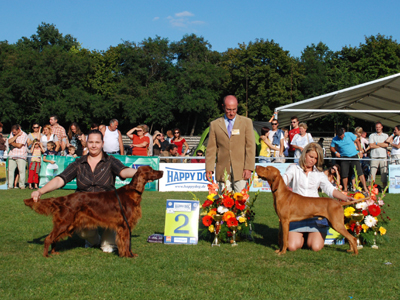 The past weekend we went to a double show in Debrecen near to the town we live in. To be honest, on Saturday I hoped for some nice result, as the judge liked Sarah quite a lot last year this time on the same show, and gave her a CAC in Open and the CACIB as well. This time after the quickest judgement I had ever experienced, he decided to put her to the third in Open out of 4, so I was a little disappointed. First and second places went to… Continue 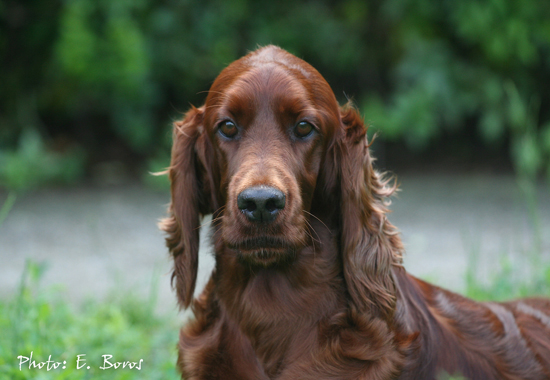 We have had great fun both in and out of the show ring many times so far, but most of you know about it and there is not much to tell you about her as new information - I think :-) What really matters is that she is my special girl who is a privilege to own, and I do hope to be able to keep her in health… Continue Still waiting for good photos from the show, this one above was taken of Sarah just a few days before we started that long drive to Portoroz. Very pleased with the results, so it was really worth it!

Sarah in the ISBC Yearbook 2007

Our page in the ISBC Yearbook 2007 has been choosen by the editors as 1 of the 12 winners of the advertisement competition.
There were 150 pages of ads in total in the yearbook, so it is an honour to be on the winners' list. 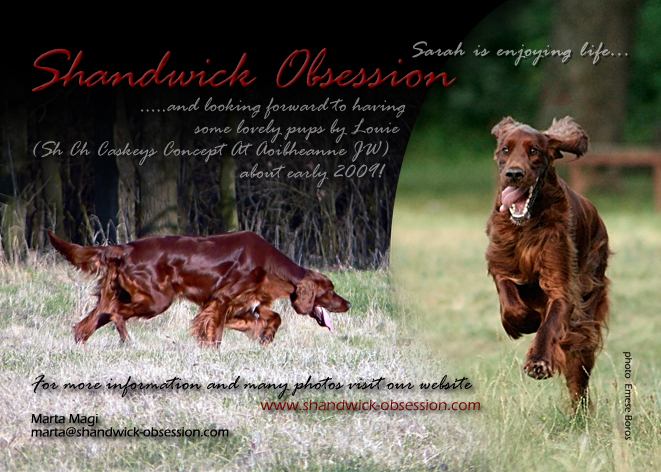 For those who can't imagine how an advertisement can be a winner, the following aspects were taken into consideration in the judging of this award: the artistic quality and appeal of the photos, originality, creativity… Continue

...some more results from England shows

I've just got the news about some main results at

Christmas Wishes to all the members of Exclusively We wish a very Merry Christmas & a successful Happy New Year 2008 to everyone here at Exclusively Setters!

I think I might be a bit late, but I am still new here at E.S. so this is my latest story that I am very glad with and would like to share :)

My Sarah became 2 years old in July so from than she can't be entered but into Open Class. I think she is too young at the moment to compete with the 'big girls', she needs some time for getting ready for it and I would not like to show her for a while. On the other hand…