I know it sounds funny, but since yesterday morning Anton's tail has been hanging down. We had a run and a swim on the beach, and we had quite some exercise and fun. Then we had an not so nice encounter with a big aggressive Akita who pinned Anton down without any reason.

Anyway, I coulnd't detect anything wrong with him, so we tried to forget this incidence and continued our morning. However, when we came home, i noticed that his tail was hangingn down, actually as if he was unhappy about something (he does this when he gets his eardrops). Or maybe his canine ego has been hurt :))

His tail perked up again when we went to another beach this morning (not where the wild Akita is). We had a good hour swim and run and he was fine - until we went home. Now, his tail is limp again. So I can't imagine it's anything physical. Any suggesttions what could be wrong with him?

Thank you all for your support and advice!

Anton's tail is up and perky again. It's just so hard to keep him out of the water, as it is sweltering hot during the day (37-39C) and we so enjoy our morning swims. We'll try not to overdo it.

Cheryl, you have a point. Yes, Anton goes swimming. But our water (Indian Ocean, Western Australia) is p...warm at the moment. And Anton is a very expressive dog, especially re wagging his tail (boy thing? :))

Usually, he holds up his tail high and when he's excited, it's almost like "tail wags dog".

Permalink Reply by eva ciechonska on January 13, 2011 at 6:27am
Sue, I agree with you. I have always found showering can do it. I always rub the tail hard underneath up and down with the towel when I am drying. So far, touch wood, I haven't had a "cold water tail" so fingers crossed.
The reason it is called "cold water tail" because Labs get it when retrieving game in the water........well that was what I was told yeas ago.

I've never had it just with waggy tails but I can see why that would happen...I had an Irish that had to have part of his tail amputated because he wagged it too much and kept banging it :-(

I can definately pin point what has happened when mine had dead tail as I call it, or cold tail, either wet weather or I hadn't dried them properly after a bath.  Touch wood it never happens now, Henry doesn't seem prone to it but I make sure I dry that area off first before I blow dry the rest of him.

BTW, it was a father and son of mine that had it, both had to go onto Rimadyl as they were in agony with it, the vet gave me a supply to use as and when needed

Permalink Reply by Eunice Marott on January 13, 2011 at 4:08pm
molly's tale is like a whip. I have never experienced this before with my other setters. It really hurts us when she gets excited and hits against us.

@ Sue Patterson- mine that have had dead tail have all been boys- none of the girls!

Hi Tracy.  The "cold water tail" after a bath is the same thing and can last as long.

It is more associated with tail activity in water.  It can happen with tail wagging but that is very rare.  It is definitely a muscular condition originally attributed to working/retrieving dogs, hence labradors, but as we all know Setting dogs and IS in particular are pond life so no surprise they can get it as well!!!!

Conner had it as well some years ago and it was in the summer (about 30 degrees) and after a bath in a lake. At that time I was very worried, I did x-ray and everything was ok and my vet didn't know what was wrong...

Funny I got to know what was that only few days ago (reading my friend's post on FB) and I think your Anton had the same. I found it is called "dead tail", "cold tail" or "limber tail" http://www.woodhavenlabs.com/coldtail.html

as other wrote here before.

Conner had it quite long - 7 days and had a swelling on the tail as well and it was painful.

I even found a photo of him at first day (bad quality as made by phone): 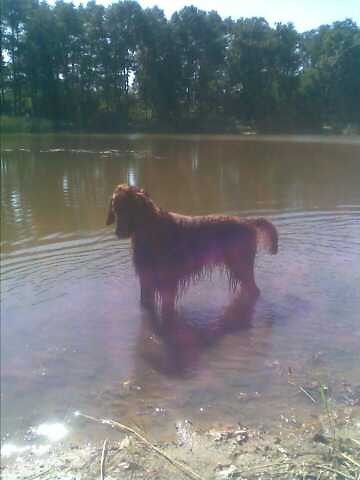 I never heard of this before a few days ago.  I was watching video's on youtube on bathing and grooming irish setters.

The lady doing the bathing mentioned to never bath your dog the day of a show because of dead tail or limp tail, that you should do it at least one or two days before it.  And how to be careful when washing the tail and not to allow water to rush under the dogs tail or butt area because it will cause it.  First time I heard of it.  Cash swims in the summer but spends more time frollicking at the shore line.  I will have to pay more attention to his tail position after it.

Permalink Reply by Ilona & Gina on January 14, 2011 at 12:59am
Thank you for the information - I've never thought about that. I will remember when I bath them. Happy to say - Anton is back to normal, with his tail up in the air.

Glad I found this discussion here. Yesterday, after a nice paddle and a good long rough and tumble on the beach with a Schnauzer followed by a shower with the garden hose Errol also succumbed to 'limber tail syndrome'... at least we hope that's what it is. He's doesn't like me touching his tail so I assume he is in some discomfort. Mind you, it didn't stop him from wanting to hump a Dogue de Bordeaux when we were out earlier... Will report back if in fact he has broken it or dislocated a vertebrae.

The first time I came across this was at a ringcraft class in the East End of London, years ago. People were trying to diagnose a limp tailed setter when a lady came in and in a very cockney accent said ' Eeeuw, cold wa'er towel'.

I spent the rest of the evening trying to work out if that was the cause or the cure!