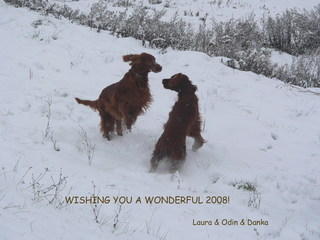 The adventurous thing I would like to write about happened on 25th December. We visited my cousin as he turned 40 years. As Danka is in season, the most convenient thing seemed to be to leave the dogs at home. I told my Dad to put away all eatable (or edible?) stuff as Odin acts very very "hungry" nowadays and would steal anything. Must be the age as she used to be the most obedient and well-behaved girl on earth - I could leave a plate of beeksteak on the table and she would…

Copper's Music And Paws becomes Champion of Champions '07, takes Best of Breed and then even Best In Group-2 :-). The breed was judged by Paul Stanton from Sweden and the group by Tamas Jakkel from Hungary. It was a delight to see that all the group-placings (they place 3 dogs here in Hungary) went to English pointing dogs, group winner being the English Pointer, second the Irish Setter, third the English…

The secret recipe is quite simple, it is a baked pastry case that you can buy in the supermarket. Cut it horizontally (or buy two... but that makes it too dry for dogs in my experience), put cream cheese between the two pieces. "Glue" together. Then put liver paté (more liver cream that we have here in Hungary) all over it. Decorate with doggie cookies. Feel free to post photos of your next creation :-)… 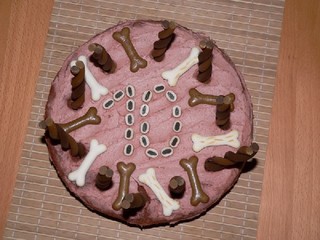 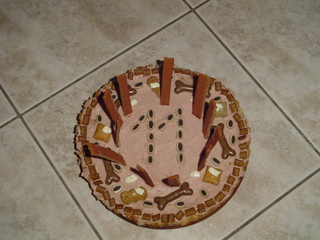 The cake is with liver paté coating and a filling of cream cheese. :-)… 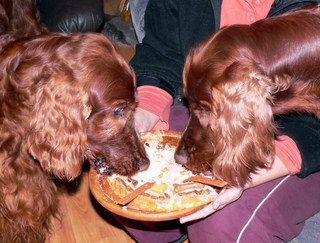 Erinade Extinguished "Dr. Robin" is an angel now. This great ambassador of the breed left us after 13,5 wonderful years. He will be dearly missed by everybody. 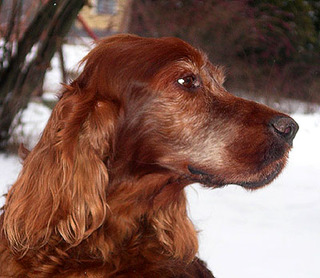 He was the star of the rings but most of all he was Emese's best friend.

Laura with Odin (your daughter) and…

Copper's Music And Paws 'Danka' went CACA, CACIB and Best of Breed today at the international show in Wels/Austria, the judge for the setters was Ilse Rosner (A). Unfortunately we could not stay for the finals and are not entered for tomorrow's show either (it is a double CACIB show) :-(… Junior bitches: Love at First Sight of the Red Empire

results from the winner-homepage, hope they are correct.

Here are the full results of the Bestensee Pointer and Setter CAC show. You can also find pictures of every dog entered.

Any results anybody? Nobody here who did well? :-)

What a nice long weekend!

We had a long weekend in Hungary, due to national holidays. Saturday-Sunday it was show time, at Budapest double international shows :) Day 1 my Danka was second in champion class, day 2 she won her class and went on to be Best Bitch with CACIB. 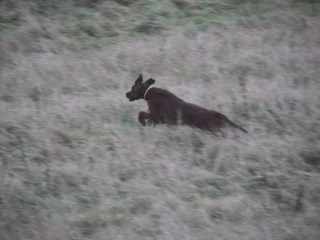 Monday morning we traveled to the field trials held by the pointer club. We are not good enough YET for the field trial :-) but managed to take their special "breeding…

Andy wins at the field and water hunt test (Hungary) 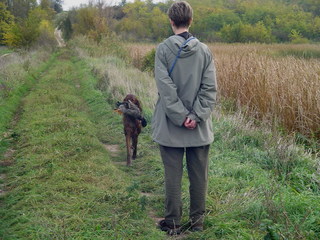 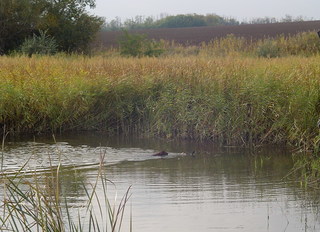 With many good Hungarian vizslas entered (and one pointer and one weimaraner), this is a very big achievement. His owner Petra is also a member of this site but might be too shy to brag :-)… 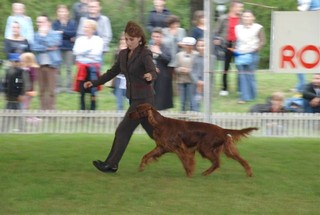 A tiring day again but worth it. No special adventures this time though :-)

Copper's Music And Paws won champion class, then went on to be Best Bitch with CACIB and then even Best Of Breed! Judge was Salvatore Tripoli from Italy and for the Hungarian show scene, quite many Irish entered.…

01.09.2007 CACIB show
judge: Atilla Kelemen (Romania) - Seamus Oates from Ireland was supposed to judge but they had a change :-(
Copper's Music And…

We traveled into the Eastern part of Hungary to spend some days at a friend and also participate in 2 international shows. Danka did great the first day, she won the champion class and went on to be res.CACIB in the final competition. Day 2 was less successful, she was "only" second in champion class. Attached a photo of her and the class winning bitch. I will upload more pictures into…

On the first page of www.yahoo.com

About dogs sniffing out cancer, illustrated with an Irish Setter :-)

Hello everybody, congrats to all the wins during the weekend. We also had a very successful day at a show. We spent a long weekend at my parents' house (fun photos will be loaded into my photo album) and surely we also went to the show arranged 40 km from the town they live in. Both my girls were entered. Odin's first show in puppy class was in this town 1997, almost exactly 10 years ago, so I thought it would make a nice "frame" to her show carrier to end it there. And…