Thanks for your concern about Scarlett and now that we are out of the woods of the experience let me share in order that you might gain some knowledge from my experience with her. I saw no noticible change in Scarlett's behaviour - she was eating fine, nothing out out of the ordinary. We had gone out one Thursday evening for a walk and when she returned to jump into our van she made a strange sound as if she was hurting.  When I went to offer her some water - something she takes immediately after a good run - she showed no interest. She went back and forth from the rear of the van to her front seat and seemed to be acting as if she was restless. Looking back now it seems obvious she was in some distress. We went home and I monitored her that night - with nothing out of the ordinary to my observation. The next morning though she was not showing interest in a walk and her usual demands (barking and stomping for a biscuit) were not made. She also did not make a bee-line for the door and did not go rushing out to run up to the fence to bark at the neighbour dogs (her usual M.).). Obviously she was not her usual self. I made an appointment for the first available visit with the vet and took her in. After an initial look they wanted to do X-rays. When the Dr. came in she told me that there was an abnormality on her spleen and that they recommended an ultra-sound and that she would most likely need to have surgery to have the spleen removed. I was in shock and terrified of losing my little red girl. After consultation with my wife, Elizabeth, and calls to talk to our vet in Louisville, KY (I am living and working in St Louis - 4.5 hours away) who affirmed the best practice to have the addional look before entering with surgery as a "heads-up" and to determine if surgery was an option or if there was something worse that has spread. I rushed Scarlett over to a vet specialist 40 minutes away who took her in and did the ultra-sound. The report confirmed the reality of the abnormality and that nothing else was evident. Recommended immediate surgery which after payment was undertaken. To say that I was in shock and very anxious would be an under-statement. Elizabeth and my step-daughter Meredith left for St Louis and arrived late that night. Scarlett's surgical success was reported by phone call and I was told that we could visit her the next afternoon. We travelled over there and went into a private waiting room. When Scarlett came out of the back she was obviously in better spirit that the previous day and was eager to head for home. I walked her outside and she acted in all ways normal - with an eagerness that is representative of her breed. We had to leave her there until that evening when she came home. She recovered wonderfully and I am thankful that I had the resources to cover the expense and that we had such great vets who knew what they were doing. I was thankful to God when the biopsy report came 10 days later saying that it was benign. So, lessons? Always pay attention to the setter under your care. Listen and look at the animal and see if there is something amiss. Go with your gut and have the dog checked out by a vet when you "suspect" something is out of the norm. Have funds available to pay for surgery... and check to see if animal insurance is best for you and yours.

Comment by Maggie Smith on May 26, 2012 at 9:36am
Alls well in the end- quick recovery to you Scarllett. My girl showed odd behaviour which made me go and check her - she had started with bloat and was in surgery within the hour which definitely saved her life.
Good luck with your girl

Scary experience Marc and so glad that everything went so well for Scarlett!!!! Did the vet say why it happened, is there a particular cause? did they tell you which kind and what was the cause of this abnormality?

I was looking on the web http://www.petplace.com/dogs/structure-and-function-of-the-spleen-i... and it seems that it is often related with the immune system.

one lesson you made me aware of is to start a saving account for my dogs, just in case insurance is not enough!!!

Thanks, Chantal. No the Drs did not have any reason for the cause. It was very disturbing to go through this. One day seemingly fine, the next showing some signs that something was up.

I have come to trust my gut and watch my "girls" more than I used to. Especially since they are both seniors, Kumara is 11 and Scarlett Rose is 8. I was shocked to learn that 8 is now considered a senior but there you have it.

In relation to bloat - Kumara had two emergency situations - the last which almost cost her life and would have if we had not experienced it previously and known what we were dealing with. I now never exercise them even for a brief walk until an hour after their evening meal.

Thanks for sharing. It is indeed scary when our setters are sick and it is our responsibility to find out what's up. I now know that when something is up to call my vet on his cell phone and share what I am observing. Dr Greg Bishop at Middletown Animal Clinic in suburban Louisville, KY has taken care of all my setters since I returned from Australia and moved here. He has been there at the toughest times and even though I am now in St Louis and home in Louisville infrequently I bring them to him if there is nothing pressing. I have found another practice in St Louis but you can't always find the personal care and commitment in a large practice. 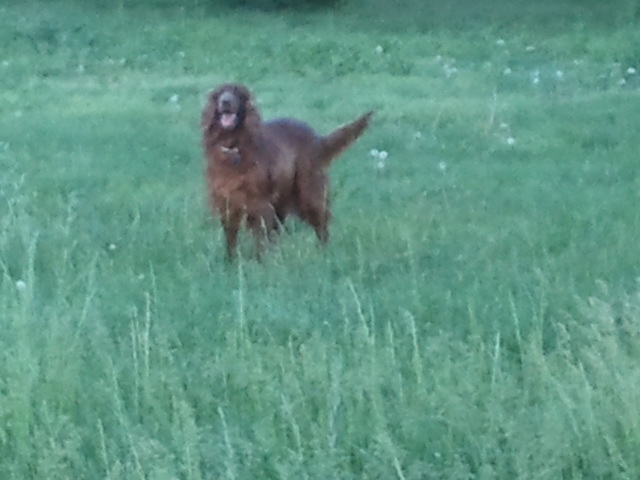 Better now, and ready to run!

Glad Scarllett, is on the mend it's so worring when they are not well, i thought my Finlay just had a sprained paw but after x-rays and biopsys he has a bone tumor, they said he had only 6weeks last december but he's doing very well, now fur grown back he just looks his normal self, were keeping every thing crossed

Roland - Merci beaucoup for sharing. I am sorry to learn of your situation. It is devastating to lose our best friend.

Ellen - I am so glad to hear that Finlay beat the odds and is doing well. Long life!