For those of you interested in how the Irish setter has changed, the following link might be of interest http://www.britishpathe.com/search/query/Setter 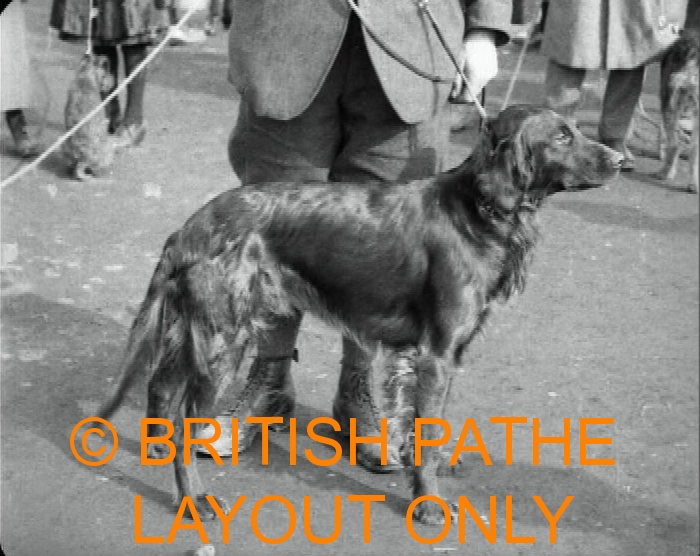 The pair of Irish from the Johannesburg Show1910 to 1919 are wonderful. Less coat makes the dogs confirmation stand out beautifully.

Thanks John for the great link

Thanks for link John! Interesting informal judging in the 20's and 30's!!!  Love the racy, moderate coated dogs though;o)

Thanks for the link, interesting to see how much the dogs have changed. Less angulation, less coat, shorter backs and necks, heads with taper instead of parallel planes. And many male handlers.

Another site worth a visit is Bardonhill.com.....there are some great photo's of dogs from the past on there.

It's very interesting to see the enormous changes, shape & coat wise, to the breed over decades.

I meant to add...'Irish & Proud of it too 1930' is funny.   The scene where the kennel maides are coming down steps, each having about six IS on leads and one of the kennel maides nearly took a detour through some bushes!

Thank you very much for the link. I really enjoyed watching gundog training 1932 in Scotland.   Such fit dogs !!!

Those are dogs from Isaac Sharpe's Stylish Kennel, very close to where I live. Just driven past there today on the way to the vets. Some of the buildings are still there, although the kennels closed around 1950. The abattoir on the site , which fed the dogs,  still sells meat for dogs locally. My vets were also Isaac Sharpe's vets, very old veterinary practice

Issac Sharpe bred pointers, English and Irish and Gordon Setters, and field spaniels. He bought the last Gordons from the Gordon Castle kennels, and bred on from them, After Isaac Sharpe died around 1939, his daughter and her husband continue to breed that line of Gordons until they went to New Zealand, dont know if they took any of the Gordons with them? it would be wonderful if some of that line of Gordons from the Duke of Gordon's kennel were still in New Zealand

But Issac Sharpe was best known for his pointers

very interesting link, thanks for sharing:-)

Thanks for the link, I enjoyed browsing through the films. Does anyone know more about the Wizbang Setters?