...are your Setters allowed to sleep in/on your beds? `Just asking.....

Permalink Reply by David McIlveen Wright on September 15, 2010 at 5:52am
then they changed places, but I was still surrounded ...

Permalink Reply by Geraldine Gaul on September 15, 2010 at 3:09pm
Sue I believe that you have setters and Jack russells, would you mind answering a query for me? My daughter has a young Jack Russell and it constantly tries to lick my setters mouth as if she is drinking his slobber (yeuck!) do yours do this?

This tickled me wen i read it!

Given the chance ruby would be in the bed! but sleeps down stairs, when we all out sneaks on the sofa spralled out on her back.

Permalink Reply by Tina Clamp on October 4, 2010 at 12:49pm
I said to my husband that i was not going to have Mia my Irish that i did not want her on the furniture, in the bedrooms and what do you think happened, Yes she now owns the furniture and when she is clean she goes into the bedrooms. She is totally spoilt. 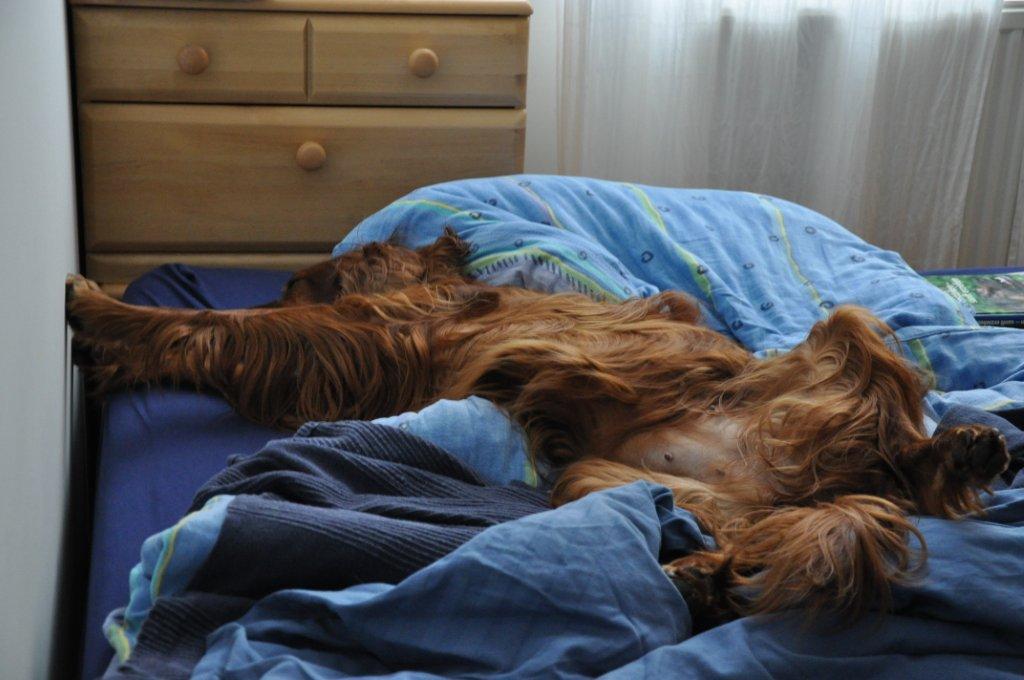 Permalink Reply by Tina Clamp on October 5, 2010 at 10:03am
She looks very at home. It does remind me of another little lady called Mia, she has always got her legs in the air whether on the bed or settee.

Permalink Reply by Eunice Marott on January 12, 2011 at 4:39pm
that photo is the classic pose of a setter on the bed

Permalink Reply by Eunice Marott on January 11, 2011 at 5:18pm
yes Molly sleeps on the bed but it so hot at the moment she gets up and down through the night which causes some missed sleep. She finds her spot and too bad about the humans they just fit where they can.

When I was single my dogs had the run of the house, my bed included, but then I only had 3 of them.  I eventually ended up with 14 dogs, all living in the house so I had to draw the line somewhere, so the bedroom was out of bounds.

I am now married and my husband wasn't really a doggy person, but he came to love Leon and he was instrumental in me getting Henry so soon after Leon went to the bridge.  He said that Henry was only going to have the run of downstairs, (we live in a town house), but he now comes upstairs, just 6 steps, and is allowed in the lounge and dining room also, where he spends every evening draped over my hubby.  He still isn't allowed to the top floor except for bath times and when he escapes our guiding hand and ransacks my stepsons bedroom...mind you, I think it's a bit tidier once Henry has been in there than it usually is lol.

Permalink Reply by Eunice Marott on January 12, 2011 at 4:38pm
that made me laugh. It is funny how they manage to expand their areas in the house, Molly is outside at the moment waiting to come in and when she does she will go straight to the lounge and rest her head and watch the world go by. It is morning here so she has the whole day ahead of her.

Permalink Reply by JOANNE on May 21, 2011 at 3:42am
Hi Christine, I seem to ge getting worse. Since I replied to this blog several years ago I have bred my first litter of Irish. I am delighted to announce that all mine now have turns in the bedroom. Kerry and Danny must share bed space not only with myself and Matt but with all the other red heads of the household. I did get a telling off from hubby last week when he returned from a night out and found eight setters either on the bed with me or on the beds scattered around the bedroom. But my reply is always "What is the point of owning a red one if you are not prepared to share life luxeries with them ". So far this seems to be working for me :-)