I am currently researching some of the old South African lines with the assistance of the Kennel Union of South Africa and "old timers" who have some memory of the legacy they left behind.

Under the ES PHOTO pages we have posted a series of photographs which were sent to us by Mke McBride son of William (known as Mac) and Thora McBride REDSUN IRISH SETTERS (SA) which are entwined with Maureen Mckeever's DERRYCARNE IRISH SETTERS (Ireland).

Photo A:  Mac and Thora arrived in Durban, SA in 1933 and as can be seen from the first photo aboard the Union Castle mail boat brought with them an Irish Setter only known as "ROY"

Photo B: CH REDSUN REGAN (b) - Grandmother to Redsun Roland of the Rand

Photo C: Taken in Athlone Ireland -Maureen McKeever with Irish - written on back

Photo D: Taken in Athlone Ireland - written on back

'The Champion Heads of Derrycarne - Redsun daughters left and right of photo."

We would be most grateful to anyone who can assist us in this research either by contributing to this forum or by e-mail mss01@telkomsa.net

In my eyes it is great that a survey is done for Derrycarne Irish setters and their breeder Maureen Mc Keever. So congratulations to you, Barbara!

Even in the recent Irish book their role is not covered, although a Derrycarne plays a major role in the leading direct male line of working Irish setters. And ofcourse the legendary shower of hail Hartsbourne Flame, present in all lines (show, dual, working, trialling) worldwide was bred by Maureen Mc Keever.

More recent, that is this Summer I was proud to see my pup Redwing The Last Apache Standing arrive who carries Derrycarnes on both side of the pedigree: Carlsberg (present in Wendover lineage) and littersister Harp (present in old Dutch lines). 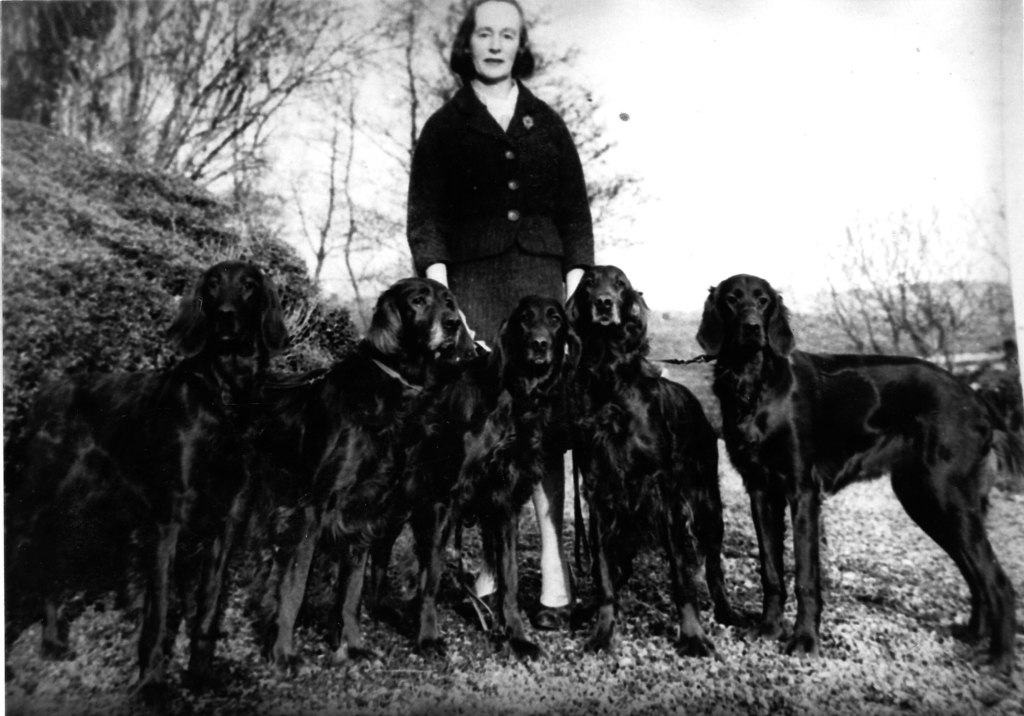 Many thanks to ES members who have contributed to this Forum, commented on the posted photos or e-mailed, your input is greatly appreciated.  I would like to draw the attention of readers to the article written by Kevin McManus for the Leitrim Guardian in 2003 - GOOGLE search DERRYCARNE and you will find the article concerning Maureen McKeever. I am currently in the process of contacting the Leitrim Guardian editor in the hope of finding Kevin McManus or any other person who maybe able to further our research.

Maureen McKeever was obviously still alive when the article was written, but we found an obituary notice in the Irish Times indicating that she passed away on 13th November 2005 when she would have been about 87years old, we believe her only heir was a daughter, but have no other information. Maureen moved into Derrycarne house in 1937 with the family leaving in 1944.  We think she owned her first Irish Setter, named UISCE BOTHA bred by Martin Colohan of Ballinasioe when she was about 21 years old.

The need to firm up a timeline is vital for the accuracy of the research I, with my husband's assistance, is vital to producing a factual work thus the involvement of authenticated documentation from Canine Governing Bodies and Clubs wherever their home base is.  So Henk, can you investigate with your Netherlands bodies what information they have in their archives - the Derrycarne Irish probably had export documentation in order to register them in your country - all such documentation can be e-mailed to me.

To John Murphy, knowing you are a keen photographer and living in Ireland we would be grateful for your assistance in tracing whether MacCormacs of Athlone are still in existence, since they took some of the photos posted on ES.  There is another photographer by the name of A. Barnard Mills but we have no idea whether he resided in Ireland or South Africa.  If you can find them they may have old archived negatives which could provide additional photo history and assist in establishing a time line.

We would point out that we are doing this work on a voluntary basis with no intention of gaining financially, thus no idea of publishing a book, however the work will be published in some form, even if it is only for the interest of Irish Setter enthusiasts.

In searching the archives of ES another publication may be useful for your research, it is about an export of a Derrycarne to the king of Belgium. And yes, the article written by Kevin McManus is a good start for further research.

In our recent trip to our Summertime Lady's birthgrounds in Ardee, co Louth, Ireland, we saw some old pictures on walls in the inner city displaying McKeever history, this may or may not be of interest.

The Derrycarne export to the Netherlands (Harp, called Kells) is mentioned in the Jubileebook 1975 of the Irish setter club of the Netherlands (ISCN) by the late Wim van Gemert. Her offspring went to under more Germany where one succesfull kennel was Carrig Maid.

The pedigrees of D. Harp and Carlsberg can easily be traced in the database for pedigrees of Hooley, UK, They have Redsun lineage. There is an Irish female line in their pedigree with gaps in it. I recall some Dutch enthusiasts, the late Wim Zweverink and Joop Buiten, contacted UK breedhistorian Gilbert Leighton-Boyce who traced this lineage. Alas, it is not in my archives.

To my knowledge the descendants of Derrycarne Harp became more or less victims of showtrends in the Netherlands, quite a few had a coat with not much feathering, which became fashion after the sixties although the "Derrycarne coat" is fully in accordance with the FCI standard. A few descendants were still able to win in subtop like Braigwaine and Fianna Fail O'Cuchulain.

Due to showtrends the lineage in NL almost disappeared. Luckily I got the tenth generation back from the USA this summer, retrieving history. Carlsberg is on the male side of the pedigree, Harp the female and there are more Derycarne links in other lineage collected by importing the pup Redwing Last Apache Standing.

Another diving up in working fraternities and a few others is Derrycarne Red Admiral of Rye, his descendants were very succesfull in under more Canada and France and still play a big role in extended pedigrees of worlds best workers. For Canada you can find documentation in The New Irish Setter written by W.C. Thompson. Mrs Mc Keever was probably the champion in using names from drinks, there is even a Derrycarne Alcoholic :-)

For France you can contact the Red Club France. Alas their historian recently died but their still must be quite a lot of pictures/information. An Australian magazine called Irish Times portrayed this historian with old pictures of Derrycarnes.

For the Irish history the Irish Red Setter Club may be a useful source, in each case the recent book The Irish Setter, it's history, character and training, written by chairman Ray O'Dwyer of the IRSC. Maureen is only mentioned a few times but there is a fine portrayal of Derrycarne Red Admiral of Rye, probably for lovers of the orginal Irish setter breathtaking: able to work tops and win shows, a great athlete!

Hugh Brady does a lot of pr work for the Irish club and is also active on Facebook. No doubt he will be interested to learn about your research, since Maureens role for the breed is undervalued.

You can also use old pictures taken by a Dutch baroness while visiting the Hartsbourne kennels, portraying the legendary shower of hail Hartsbourne Flame, bred by Maureen Mc Keever. This once vivid color variety (see the book of Ingle Bepler) in the northwest of Ireland still dives up in all lines, show, work and trial worldwide. This illustrates Flames influence, mostly in the Sh Ch Hartsbourne Tobias x Ch Hartsbourne Popsy litters influencing all lineage all activities worldwide. Other lineage nearly vanished.

Well, this what I know and hopefully it is of use for your research.Some lineage is very interesting for fanciers now when they want to broaden the genetic variety of our breed, sometimes you can find in some places in the world some of the antique lineage and this may help the Irish red setter and the Irish red and white setter to trace sources nearly lost.

Analysing this history I'd say Maureen Mc Keever might have been one of the last succesfully breeding dual Irish setters. Since her days the types have split up in camps with conformation wise almost no more athletes like Derrycarne Red Admiral of Rye.

Can you check the e-mail address provided? Thanks!

Technical details of permanent failure:
Google tried to deliver your message, but it was rejected by the server for the recipient domain telkomsa.net by mail.telkomsa.net. [196.25.211.70].

Please keep trying , the e-mail address is correct. We are experiencing a winter storm at present and our service provider , Telkom, is not the most proficient around

They do not call the southern most point of Africa (l'Agulhas) the Cape of Storms for nothing, albeit that we do not usually experience such storms at this time of year!  However as you can see the lines of communication are now open!

Many thanks, Henk for your various suggestions regarding avenues of research, I do have Gilbert Leighton-Boyce's book and have scanned Hooleys and Kennel Club (London) on their "Select mate" page.  Yesterday wrote a lengthy letter to Irish Red Setter Club, Ireland and will chase our local Kennel Union of Southern Africa tomorrow (Monday) so hope to have unearthed further factual and interesting information during the coming week.

Just recieved the photo below of Derrycarne Idea from the McBride's it is sister to Derrycarne Harp (Netherlands) and Time (Ireland) - Time being the only offspring shown on Hooleys webpage sire by Redsun Roland of the Rand out of Derrycarne Tia Maria.

Fascinating to see more history of relatives diving up, Barbara! Good that the storm is over, I've send meanwhile seven highlights in pictures and articles reviving mainly Dutch history plus the shower of hail story in Irish Times and pictures of Hartsbourne Flame, bred by Maureen Mc Keever.

I remember your remarks on Joe Braddons litters being discussed in those times (end of sixties). Jan Hesterman (breeder of O'Cuchulains, Netherlands) was a pedigree-expert who was fascinated by the backgrounds in extended pedigrees of the Derrycarnes. He considered them to be of great value for the future of Irish setters.

Wim van Gemert wrote in the small book Jubileum Ierse Setter Club 1915-1975  about female lineage (pp 27) under more: (quick translation): "There were not many possibilities in the Netherlands to build something awesome on this lineage. But who knows somebody will some day be able to manage this with descendants of this beautiful setter."

As for tracing nowadays descendants via the Hooley website, it does not offer a complete picture certainly not the Select mate page. You come a long way typing in the pedigrees of Summertime Lady and Red Knight Adventure (born in Ireland, 2011) and trace ten generations. Last is the sire of Redwing Last Apache Standing. The dam side Redwing Tara at Longford can be traced by typing in the sire Fyledalens Aragorn or his brother with an A and dam Fiona O'Conloch.

Colette Tuite wrote on my FB-page about her field IRS Porschet/Rua, who carry quite a few lines to Derrycarnes via under more Beggars Bairn and more. A part of them are in the pedigree of Aragorn.

The Irish setters bred by Marueen Mc Keever that will dive up most frequently in nowadays pedigrees are probably Hartsbourne Flame (mrs Eileen Walker) and Derrycarne Carlsberg (mr Jimmy James-Wendover I). Flame was the dam of Sh Ch Hartsbourne Tobias and the litters of last with Ch Hartsbourne Popsy influendced IRS worldwide. But a lot of other lineage has become very rare.

Success in tracing the Last Mohicans :-) !