What is your favourite settersong, -book, -movie, -history, -photo and -story?

Wondering while reading your posts: what is your favourite settersong, -book, -movie, -history, -photo and -story and why?

My favourite settersong is “Abergavenny,” on a picturesque town in Wales. Shannon sings praise on a red setter in this 1969 hit if I'm correct and reportedly there was an Irish setter on stage as well. Closely followed by Start me Up (Rolling Stones), could be a good song for start of a working day.

Movie - Walt Disneys Big Red. I've never seen the Bonanza-series with an Irish setter in it so this one might be still be beaten.

History - the giant task a few people set themselves up with in the fifties to restore the Irish setter into former fieldglory in the USA as portrayed in The Modern Red Setter. Closely followed by The New Irish Setter (Thompson) as you can see how the Irish setter changed from an athlete into a showclown.

Photo - The kid that was saved from a burning car by an Irish setter in St. Louis. I've still got the picture.

Story - A short story of Colin Mc Kelvie (Ireland) on working Irish setters all year around. In it is decribed work on all kinds of game so not only specialist stuff (feathers). Closely followed by a short Internet-story on Clancy howling all of the village at the time his owner was shot in Vietnam.

Thank goodness for that i thought i was going mad, i saw a post last night about setters being in a episode of the Fugertive watched that then looked again and post had gone (",)

Ellen, thats what The Fugitive was all about! Here and there and than he's gone :-)

A few of them in the episode Bloodline:

Henk, yes thats a good one your right, here and then he's gone (",)

Permalink Reply by Dianne cook on February 13, 2013 at 5:53pm
Just watched the dog food Ad... Loved it. I thought the chocolate Newfoundland could be my daughters called Themba. Themba would be sitting there not moving, unlike the active Irish. :)))

Permalink Reply by Jane Turner on February 14, 2013 at 1:22pm
Anyone learn to to read with the Ladybird Books featuring Peter, Jane and Pat the Dog?
Attachments:

Yes remember the books I think this was the start of my love for Irish setter. 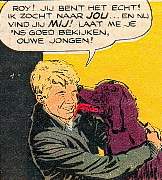 Good to read about a start of love, Angela. This is mine, the Irish setter Roy in a Dutch youthmag entitled Pep, 1963. It was based on the Walt Disney movie Big Red. I'm still searching for those Peps!

That's it...that's where it all started for me too:)

Under the title The way home I found the amazing story of the Irish setter Maccabeo in an old book.

Maccabeo did 150 kilometers between Gressoney and Zermatt, crossing the 4500 meters high icedesert of the Mount Rosa. According to the book, written by Ulrich Klever, Maccabeo arrived "almost starved and dead tired" at his family in Zermatt who spent their holidays over there.

A year earlier Maccabeo made the road from Gressoney to Zermatt ​​by car, but over the pass of St. Bernard, the book mentions. "The route followed this time, was roughly equivalent to the route of the airline. The scientists have not yet determined how the dog can make such a performance."

Maccabeo's picture was in many books/magazines/journals. So she was worldfamous once. I could not find one on the internet.

Another source tells about a sad ending of an Irish setter called Maccabeo. Not sure it is the same. This is on http://www.alpinejournal.org.uk/Contents/Contents_1965_files/AJ%201...

"The alpine career of this famous canine mountaineer has ended. Maccabeo, an Irish setter, disappeared last summer and is presumed to have fallen into a crevasse. Her first expedition was in 1954 when she went up to the Regina Margherita hut and from there crossed the Lysjoch to Zermatt. Every summer thereafter Maccabeo left her home at Gressoney about the end of June and for three months wandered about among the mountains of the Monte Rosa group. She did not make any major ascents and her career was not so distinguished as that of Tschingel, Coolidge's dog, but she was often met by climbers at alpine huts. She had some adventurous expeditions; a British climber once met her on the Lys glacier and saved her from falling into a crevasse, and on another trip she fell into a crevasse on the Verra glacier but was rescued by an Italian customs guard. She was eleven years old at the time of her death."