Is anyone aware of new research on the health effects of neutering? I have read the one from UC Davis on Golden Retrievers, but is anyone aware of a similar study on IS?
I have a 12-month-old intact male and are reluctant to neuter. However, we have no fence in our yard and although he is usually leashed (and always supervised), we worry about the potential of him smelling an in-heat female and taking off.

I personally would never consider this unless it was medically necessary. If, as you say, he is always supervised, why would you worry about him taking off! Of course a bitch in season will always turn a dogs head (speaking from experience with my boy) but if you are on the scene or he is under control, then it is a non issue. Surely not worthy of an unnecessary medical procedure, Julie?

Permalink Reply by human friend on May 4, 2016 at 8:45pm
I would sooner put in some kind of fence around all or part of a yard than neuter a glorious Irish!

Permalink Reply by silvia on May 5, 2016 at 1:11am
Oh no Julie don't do that .. Google on the previous blogs and you will find lot of discussion on this. ..unless for medical reasons or other concern I would never neuter a lovely is. There is no guarantee his coat won't change. ..
Oberon is intact and yes lovely girls in ' that ' period are interesting but ..It has never been a concern! Just we need to stay on lead if there is one around. . ; )

Permalink Reply by Julie Steinbrenner on May 5, 2016 at 9:19am
Honestly, my gut is to leave him intact. We've always just gone along with whatever the vet suggested but enough years of petownership have given me the confidence and experience not to do that any more. I don't care about any physical changes through neutering. What I really care about is if it is the best thing healthwise. I don't want his bone/joint health or anything else compromised through early neutering. Sadly, he is not allowed at the off-leash dog park now he is over a year old and still intact, which is his favorite place to be in the whole world (and the best outlet for his puppy energy). However, I'll do whatever is best for my boy. Thanks for your comments!

We were advised by many members on this forum not to neuter our setters because of the physical/mental effects and so we didn't. Recently we met a six-year old IRWS who had been neutered and were shocked by its appearance. Bad coat, no mojo and walking like an old dog almost twice its age. His distressed  owner told us she regretted her decision and would never do it again. The difference between him and our six-year old was actually quite distressing for us both.

We have had some off-lead walks ruined by the appearance of bitches in season and had to put our dogs on leads and practically drag them back to the car park but I don't regret our decision for a minute.

If you're worried about him getting out you could invest in a fence for peace of mind.

Permalink Reply by Julie Steinbrenner on May 6, 2016 at 3:07pm
Finn,
Thanks for your comment. That's very interesting. Sadly we live in a neighborhood where no fences are allowed. We are putting in an electric fence and hoping that will keep him home, as well as being supervised.
Feeling better and better about not neutering!

Right, Julie, I see you're from Washington, US so I don't know your laws. Here in Ireland we can put fences up in our backyard if we want.

We once visited a sheep farm with an electric fence and after one attempt at trying to get through our boys left it well alone so it could work for you.

All the best and hope your solution works.

Permalink Reply by silvia on May 7, 2016 at 2:33am
Is soo sad that most daily play centers don't take intact dogs. We face the same in London and is very disappointing in particular with the gentle character of an is (compared to several aggressive neutered dogs we know !!! )

We always being able to find way around and dog walkers /groups who are sensible and just look at the dog not if is neutered or not : ) so oberon has his good 6h per day of free running off lead with his friends even in occasion when we can't take him. ..but I don't know the regulation in the states and certainly is frustrating and requires more shopping around. ..good luck I hope there is a place for running for this poor nice boy !!!; ) .cheers

Here in the US we are very much backwards from Europe in terms of neutering. Here in the US there is a stigma that you are an irresponsible pet owner if you don't neuter your pets. That might also be due in part to irresponsible pet owners allowing their pets to run amok and contribute to many unwanted pregnancies. And, yes, most pet daycares will not allow an intact dog over the age of eight months. My husband adopted our Bentley when B was 3 years old. He was intact when he was surrendered but most, if not all I think, shelters require neutering when you adopt. Yes, we Americans are barbarians.

That being said, B had no personality when my husband first met him, before he was neutered. We attribute that to the fact that he had been surrendered from an unknown living situation and had been at the shelter for several months. That's enough to depress anyone! He actually was suffering from a dermatitis caused by his testicles rubbing on his inner thighs. This was "cured" when he was neutered, according to shelter rules, and he never seemed to miss them at all. His personality improved immensely but we also attribute that to his being adopted into a loving home.

Regarding his coat, yes, he has the wooly coat common to neutering. However, his coat was in terrible condition when my husband adopted him. Our best guess is that of poor nutrition. He has a sensitive stomach and threw up much of the cheap food he was given in the shelter. It improved with the diet we have him on now but is still pretty wooly.

Yep, here in the US, vets frown on intact dogs. I've never had a male Irish Setter, but one alternative to consider for a female, especially for those of us in the US, is the Ovary Sparing Spay. Years ago, my first Setter had an OSS, and so still had hormones and mild (almost unnoticeable) heats throughout her nearly 15-year life. Her coat remained dark and silky, she had no bone or incontinence problems. She was healthy and happy until the end. I guess that could have been luck or genetics, but I've done plenty of research and am confident about the OSS as compared to a full spay (the latter I just wouldn't do). Our 18 month old pup will have an OSS in a month or two.

As others have said, vets in the US tend to prefer full spay/neutering at a very young age. Most don't like the OSS due to data about ovarian cancer and other statistical concerns. However, that attitude may be changing, thanks to more recent research and organizations like the Parsemus Foundation.

So, just thought I'd add that idea into this important and interesting discussion. I wonder if there's something similar for males short of the typical neutering.

I know this will cause a lot of people a lot of upset here but both my boys are neutered and I will continue to neuter any dogs that will come into my care. This is not only for piece of mind but also because to keep a dog intact if I have no intention to ever breed from him is somewhat cruel. In my experience it just drives them bonkers. I have spent my youth chasing entire males (not Setters), I have tried for 4.5 crazy years to live with an entire IS and eventually I caved in. Best thing I've ever done! The only thing one needs to remember is to do it as late as possible to allow for full physical and mental development, 2 years is probably ideal.

Both my boys are healthy, sound in mind and enjoy an outdoor free running life style. They get fed a BARF diet with a lot of extra salmon oil thrown in to keep their coats nice and glossy. I strip them once in a while to get rid of any dead coat. Personally I find many Irishes too overbred with way too much coat for the life style we lead here on the South Downs so a little less coat suits us just fine. 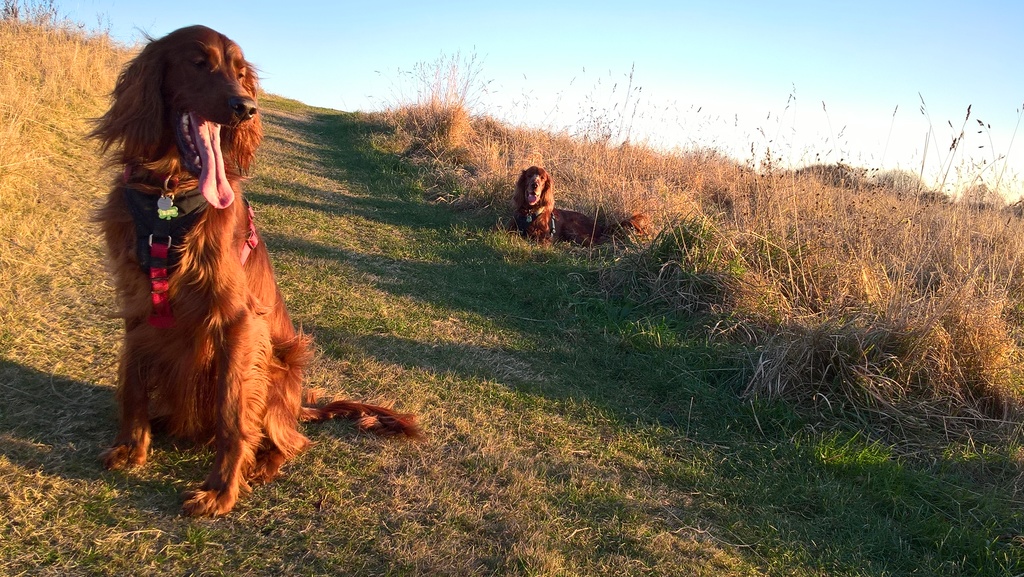 KC, Thanks for this information about your two beauties! I haven't ever had a male Setter and can imagine the challenges of an intact male. I guess personal experience and the fact that I won't be breeding Birdie make me comfortable with the OSS.