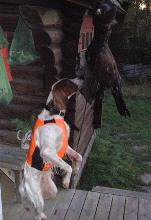 Myra Thomas-Rhodes said…
Welcome, Merete and Thomas. It looks very cold there!
Cheers, from Down Under.
Myra.

Margaret Sierakowski said…
Thanks for the Norwegian breed programme, its ambitious and uncompromising, but if you stick to it, you will breed some real IRWS!
I love the photos of Skadi, she looks very like her sire Goshawk when he was younger
Merete, can you E mail me privately dalriach@aol.com?

Yep, I am afraid, there is too much HD in the IRWS and it has to be taken care of. I was very happy to read the strict rules of NISK ! Congrats !
Will we meet in Dublin in september ?

Fiorella Mathis said…
Hi loved the photos. I am really wondering how versatile this IRWS has to be...running from the high heathers in Ireland to the burned plains in Italy and Argentina and the green ones in Poland and in the snowy scandinavian countries. I guess that - but this is my modest opinion - every country will have to train their IRWS in their own way, and it will be very hard to have them once running altogether in a European Trial.all at the same level...for sure some of them will be advantaged (depending on the grounds). Loved also your video.

Susan Stone said…
Hi Merete!
loved your videos and was interested to see the method of introducing a youngster. Look forward to seeing more!
all the best
Susan

Congratulations on your FT. Skadi really is amazing. ;) Are you or your boyfriend hunters?

Thank you on you complimnet. I dont use my bitch for hunting, she is more a pet. My boyfriend is a hunter, but he perfers his German Short-haired Pointing Dog for hunting.

All the best!
Kristina

Susan Stone said…
Hi Merete & Thomas,
very happy to make new friends! I look forward to learning more about the setter-scene in Norway, something I know nothing about. Also I love the photographs of the landscape & the dogs at work. I had a browse through the website but sadly do not udderstand a word... - but good to see 'Amazing Skadi' making breed history!
Can you tell me a bit about the 'US' setters that seem to be THE name in working irish in your part of the world?

How many Irish Setters do you have?
3 - two red and whites and one red.

My fiance Thomas and I got our IRWS bitch named Toboggan's Amazing Skadi (Dalriach Highpoint x Dalriach Goshawk) from the norwegian breeder Thor Erik Pape in 2006. We live on the West Coast of Norway and we use our dog for hunting and field trials. We are very pleased with our dog and we would like to add another one with good hunting and field trial abilities to our little family during the next year. Norwegian field trials often take place in deep snow and up in the mountains on large plains (hunting grouse), where the dogs need to be tough, fast and have a very good "engine" to excel. Especially in the winners class, where the dogs compete against each others, finding birds first and most often being the number 1 criteria.

If you know of any upcoming litters that has the potensial to excel in norwegian field trials (good hunting desire, high intensity, among others), please let us know!

This february we got a red addition to our family. Her name is "US" Snoop Dogg" (Snoopy) (FTCH Valeheia's Killakee x "US" Lara) and she is from Elin Wittusens "US" kennel in Norway. She is from pure hunting lines and we are looking forward to see how the "pocket rocket" is doing in Field trials next year :)
We have not given up our hunt for a new IRWS pup, but we have realized that it will take some time to find just the right one :) It's a challenge to get an overview of the different lines when the breeders are spread all over the world :)

Below you can read a translation of the new 2008-2012 Breed Program for the IRWS in Norway, by the Norwegian Breed Committee (translated from norwegian, may contain som minor translative errors...):

The new breeding program has four main issues in its criterias, in which working ability has the strongest focus:
1. Working ability
2. Behaviour/temperament
3. Health
4. Conformity/exterior

The reason working ability has the strongest focus, is due to the fact that this is where the IRWS in Scandinavia has the biggest challenge. Data from field trials will be used as an objective expression for the working abilities. Increase in hunting desire is the foremost target for the breeding program at this point. The average hunting desire for Norwegian IRWS in field trials up to and including 2007 is 2,68. The maximum for this scale is 6. The average for all pointing dogs in Norway is 3,95. For Norwegian IRWS who has entered field trials the average points for pace, style, independence, search range and search pattern is approximately half of the average for the red irish setters. The method of index-based breeding has shown good results for other breeds i.e. Breton. The 2008-2012 breeding program will foremost focus on the working abilities such as hunting desire, gamebird finding, search pattern/-range and cooperation. It is very important for the index-based breeding program that as many IRWS as possible enters field trials, and that each dog enters multiple times. To encourage this NISK arranges field training gatherings for IRWS, and for 2008 and on there will be a IRWS of the year-award based on points collected on field trials similar to the Irish Setter of the year award.

Regarding behaviour/temperament, health and conformity/exterior the breeding program also has high standards, which will not be discussed or attempted translated in this article.

The new breed program 2008-2012 sets the following criteria for breedings recommended by the Breed Committee (freely translated from Norwegian to English):

Field trials:
One of the parents should have achieved minimum 2nd on a field trial. The other parent should at least have been started in field trials or field training gatherings, or have parents or siblings with achieved field trial results.

Other criteria:
Documented no HD (A)
Tested or documentet no CLAD
Good health, good temperament, no physical or behavioural abnormalities
Father-daughter or mother-son combinations not allowed
The Breed Committee can decline approval of other combinations or close related parents in which earlier matings have produced “unfortunate” results.

Widening the gene-pool
In addition to the breeding criterias the Breed Committee has its focus on widening the gene-pool for the IRWS in Norway and Scandinavia. This will also be a factor when The Committee approves new matings. Today there are approximately 30-40 IRWS in Norway, and very few have been tested in field trials. To widen the gene pool the Breed Committee will encourage importing new dogs, preferably from bloodlines not too closely related to existing lines in Norway. Also there will be produced a outcross program in cooperation with SISK (the Swedish Irish Setter Club) and IRWS Club (the Irish Red and White Setter Club), if approved on the highest level in Ireland and Norway (NKK – the Norwegian Kennel Club).

Dam Skadi has 1AK (thereby qualified to run in the winner stakes) in norwegian field trial... and 2 x…

Toboggans Amazing Skadi got her 1. AK on field trial today (15th november 2009). This is the first time an IRWS achieves this placing in Norway.

Now she can enter the VK-trials (Winners Class) for the next two years, which are the most prestigeous trials and where the CACITS are achieved (very hard to get though). CACIT is needed to become a field trial champion, in addition to 25 FT points.

In addition she now has the required field trial placings (1. AK) to become a Show… Continue

Irish Red and White Setter Toboggan's Amazing Skadi got her 2AK (2.price, Open Class) at Kongsvoll-prøven(Highland field trial on grouse) on october 2nd 2009. She is the only irws with this high placing in Norway, together with Ben of Sugarloaf (visitor from sweden) who got the same placing sometime in the early nineties.

She is also the first norwegian IRWS with several field trial placings, and with placings both on highland and forest trials.

This also makes her… Continue


Just made this teaser for the 2009 Irish Red and White Setter field training and get-together at "US" kennel & camp on Hjerkinn,… Continue 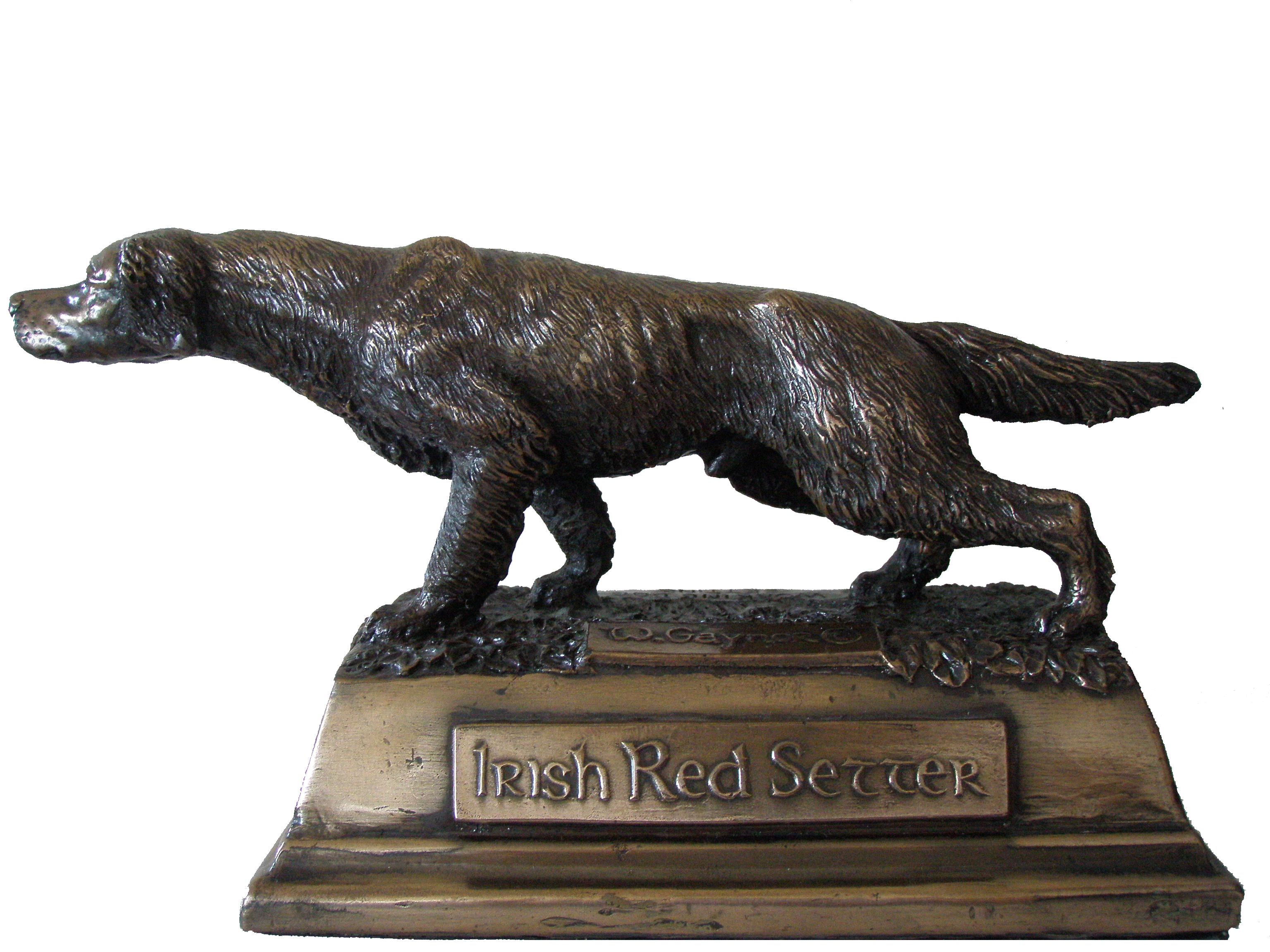