Yesterday the ISAE & Setter & Pointer Club held an Open Stake at
Six Mile Bottom in Suffolk, England; the only setter breed not running
was Irish Red & Whites, so we had Irish Red, English & Gordon
setters running, although the English Pointers were in the majority
& took both the awards.

The dogs were working French partridges & the birds were sticking very close to ground as it
was a very cold day with a bitter Southerly wind, so we did not see many
clean flushes.......in fact the dogs put up more Hares than birds &
some just could not resist the temptation of giving them a good old
chase....much to their owner's embarassment!

Chris Heron from ISAE Committee was in attendance the whole day & she presented the
awards.....& as you will see from the photographs (more
photos on my page) she got an
unexpected award herself!!! :))

All in all a very enjoyable day with an absolutely super bunch of people & their splendid dogs. 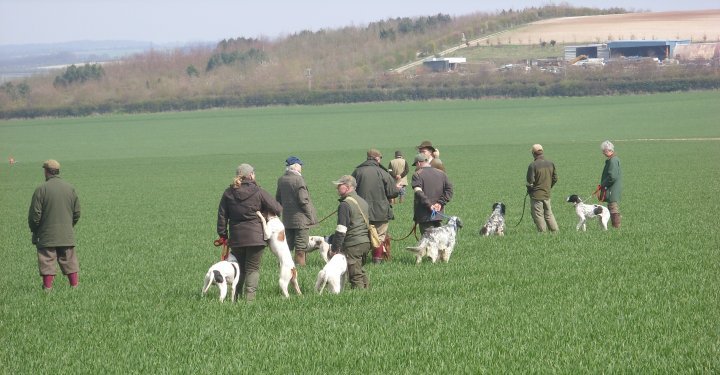 Comment by Angela Roberts on April 16, 2010 at 3:29am
Thanks Lynne for giving us a taster of things that go on in the working side of the breed. Looking forward to going to one myself in the future.

Comment by Lynne Murray Hogsflesh on April 16, 2010 at 6:05am
You will thoroughly enjoy your day Angela...we were made so welcome & only 1 chap said that he disagreed with us 'show people' being made to be there, everyone else was lovely!
Be warned when you do go...take a warm hat or ear muffs as the wind can be fierce, take gloves for the same reason, wea &r comfy boots rather than wellies as you will do a lot of walking; most importantly, don't drink too much at breakfast 'cos there ain't no Portaloos & you are out there for a long time! :)))

Comment by Margaret Sierakowski on April 16, 2010 at 12:55pm
Was this the Open Stake? There was an IRWS running in the Novice Stake, one of mine

Comment by Lynne Murray Hogsflesh on April 16, 2010 at 1:46pm
We only attended on the 2nd day for the Open Stake Margaret & unfortunately no red & whites were running that day so we missed your lovely breed, I see from the catalogue that your Dalriach Neige was in the Novice Stake the previous day. :))

Comment by Susan Stone on April 17, 2010 at 10:39am
Thank you Lynne for giving us a little 'sniff' of the spring trials. I'd have loved to be there myself...
I think very quickly some of those 'made to go' will be going voluntarily... AND try to start training their own dogs. This stuff is dangerously addictive you know;-))

Comment by Lynne Murray Hogsflesh on April 17, 2010 at 11:11am
I know what you mean Susan.......I am already looking for some summer trials when hopefully there will be more Irish running,especially when they are working grouse. Also been watching my lot more closely when we are in the fields.....not too sure I've spotted potential tho! But never say never :)))