Our summer in Norway (part three...)

Finally, I'm able to tell you of the last part of our journey. It took her a very long time to stitch the above 360° panorama; yes, it's going all way round and it is made out of 20 upright photos! She stood on a rock and I just heard the clicks, while she was turning evenly on her heels (click on panorama to see in full saturation). Are you quite finished, taking that photo now? We went on to the fisher village of Kabelvåg. 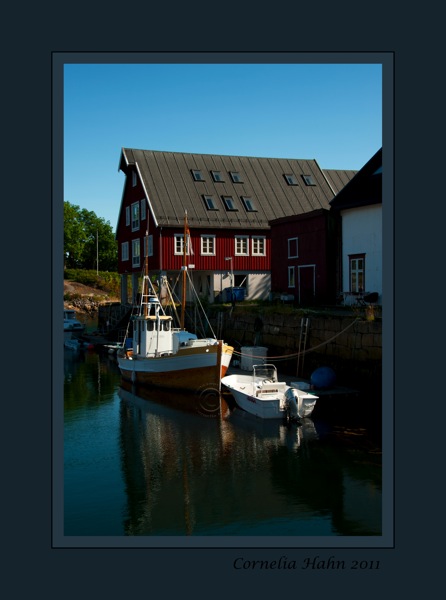 Here's the same house 19 years back; it's renovated now and the houses in the background have been knocked down. This is a scan of a real fine print, made in their own darkroom for exhibitions in Switzerland and France - long before my time :-)) (FM2, AF Nikkor 28-70mm, Ilford FP4, Beseler cold light enlarger + Zone VI cold light stabilizer, Ilford Galerie paper, enlarged by Sinuhe, Epson scan of the final print - for more b&w's, have a look on my homepage: http://www.playativity.com/30201/30301.html ) 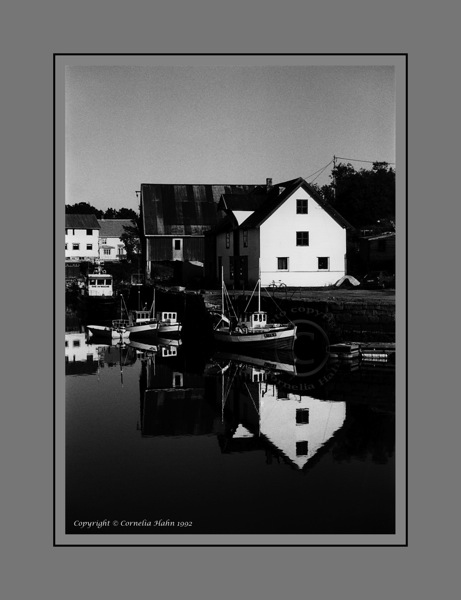 Before we said goodbye to the Lofoten Islands, I had a good run on the beach... ... and she took some photos of an oystercatcher (Haematopus ostralegus) - now you tell me, who's the bird hunter here!! 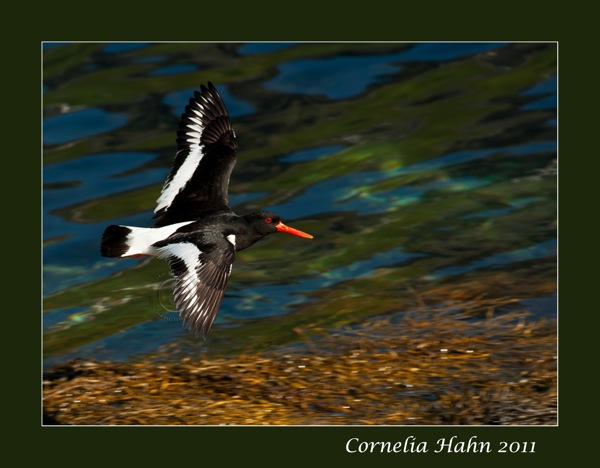 On our way home, we passed another nature reserve, the Dovrefjell national park, in search of the musk ox. You find more photos on my own tour blog here (including another panorama and the animal I'm pointing in the small photo): 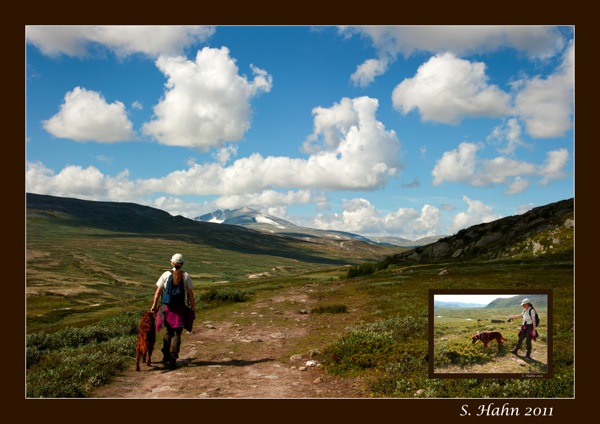 After that, the weather began to change and we passed the famous troll road and Geiranger fjord in thick fog. We could just take a few photos and then this rock did also disappear in the fog. So we went further up to the Dalsnibba from where we could look down on the fog covering the Geiranger fjord and see the road, we just came up. I was not interested in the view - the moving shadow of a flag on that rock below caught my attention. 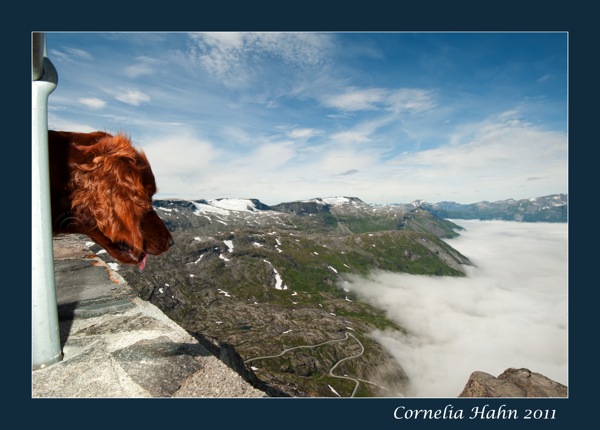 When you travel and hike, you also have to rest. This reindeer lichen (Cladonia rangiferina) is an absolutely recommendable soft bed!! 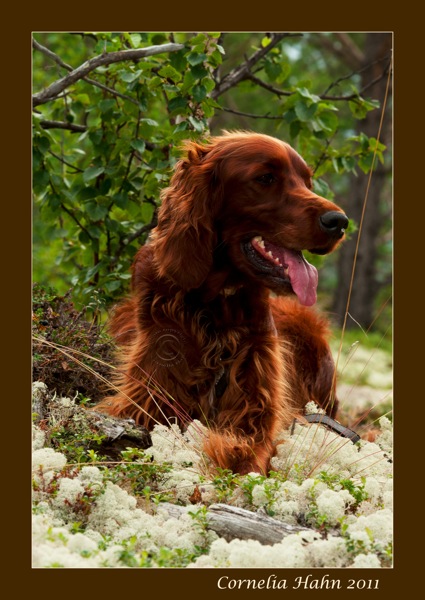 I was fascinated by the smell of real reindeer all around me (they feed upon it during winter), while they had only eyes for mushrooms: Rufous milkcap (Lacratius rufus): 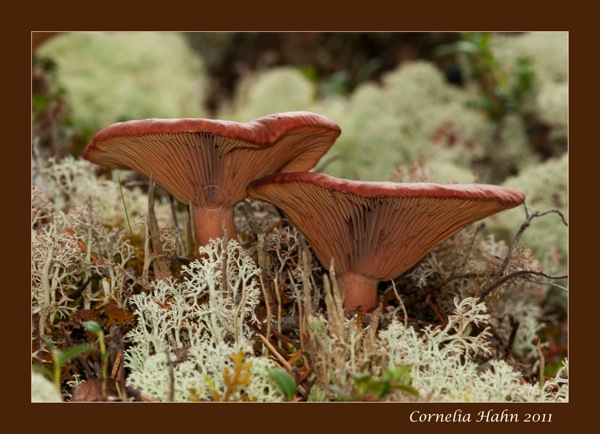 On our last beautiful day, we attempted another hike in the Jotunheimen national park, but it proved a bit too difficult still for the three of us and with bad weather forecast, we decided to turn round, rather than to slip on the rocks, and enjoy the day and the last bit of sunshine. 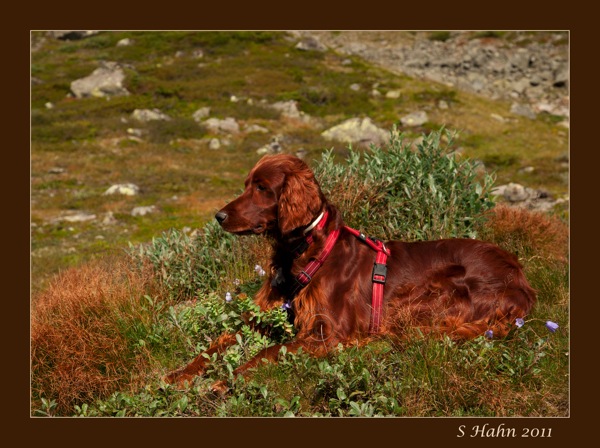 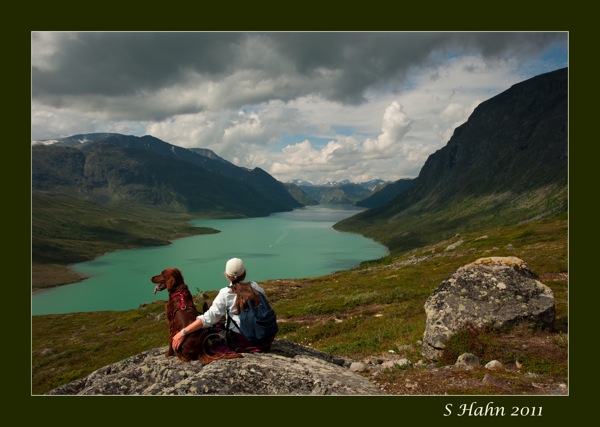 Last but not least, one pic of the other photographer and me. We all had a wonderful time and I hope, we go again soon! 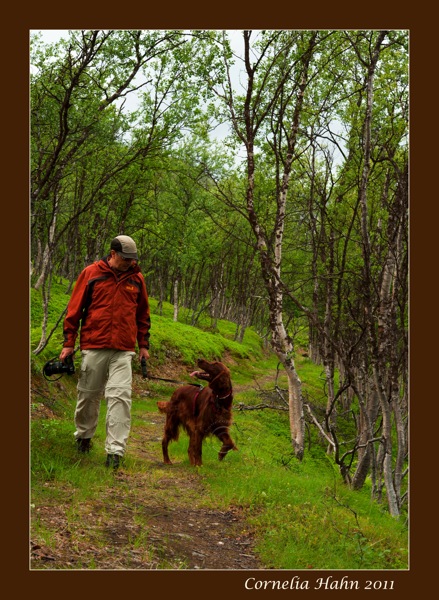 Comment by Carmel Murphy on October 28, 2011 at 3:28am
Wonderful photos of a very beautiful country(would love to visit both Norway and Sweden some day;o)) What a lucky dog;o))

Comment by martina mckeag on October 28, 2011 at 8:05am
Absolutely beautiful photos thank you so much Cornelia for sharing them with us its the only way i'll ever see Norway its breathtaking and not to forget the beautiful Joy look forward to your next trip

Comment by Susan Stone on October 28, 2011 at 10:46am
Just stunning! Norway is really beautiful, I'd like to see one of their trials when they take their cross country skis...

I have been thinking you have forgotten about promised part III.

Wonderful story! I like that green lake very much:-)

wonderful photos Cornelia, a huge thanks for sharing!!! We never considered to hit Nord Europe, but you made me so curious and enthusiastic that we'll certainly plan a trip there at some point:)

did you eat the milkcap?? In the Alps, where I grown up, we just collect them to be a part of a "mixture" dish of mushrooms, but they are not considered an highlight.. I know in several north countries they are told to be a delicacy, so I am wondering is a slightly different (and much better) mushroom that you find in the north EU :)

it looks as Joy had a wonderful time:))) my compliments for beeing capable to organise such a Joy-friendly trip:) I love the  "moving shadow of a flag on that rock" pics, joy is definitely finding her attention seeker tips while you guys take such boring pictures all the time :)