Did the breed change or not since the sixties?

Did the Irish setter breed change in half a century or not? In a topic elsewhere there is a statement  the breed did not change in fifty years.

Here is a kick off with an article on the Derrycarne Irish red setters, bred by Maureen Mc Keever, published in 2003 in The Leitrim Guardian, written by Kevin Mc Manus. Her activities cover a large part of the period mentioned in the statement. She bred more key Irish setters in both show and working nowadays Irish setters. Would these still be able to win - show and/or work?

Because there was some interest in Derrycarne history, on request a story is added on a daughter of Derrycarne Harp - Ailean O'Cuchulain. Its entitled Devils Dearest, written as a tribute.  On request as well a story Hartsbourne Flame was added. She was a shower of hail and littersister to IRCH Derrycarne Martini.

Replies are closed for this discussion.

Permalink Reply by Cheryl Gorey on June 18, 2010 at 2:36am
“You disagree on my comment that critics on Alcoholic and Shandon mirror lack of education. Well thats where we agree to disagree. In my eyes an ideal life is permanent education.”

I agree that life is permanent education and we live and learn every day. That wasn’t the point.

Perhaps if we are all objective about this comment, then we should see that I was also stating that if you believe if critics of Alcoholic and Shandon mirror a lack of education, then critics of W. Gentleman and C. Prince Charming also mirrors a lack of education. These dogs conform to the sketches provided, however, clearly Gentleman and Prince Charming to the sketch out of Janice Roberts book and I presume you are comparing Shandon and Alcoholic to the other sketch that you posted for me?

So, if these are the two sketches which determined the structure and conformation of the Irish Setter. How do you compare Shandon to the points on the sketch?

We should remember that it’s not about what is winning the most that necessarily identifies the dog as the best conformed Irish Setter. Unless we are saying that human nature has also changed during the 1960’s and all dogs were judged as seen and not due to friendships and handlers at the end of the lead!!

I would have to say, that I have seen both types as per the sketches in recent times in the UK type Irish Setter Genepool.

Permalink Reply by eva ciechonska on June 18, 2010 at 3:11am
Cheryl, thank you for presenting a calm and ordered view on both sides. It is interesting to compare the two sketches enclosed here and just look at the standard which says (tail) "set on just below the level of the back" (UK version, the FCI version differs here, don't know why). Incidentally the sketches in Janice Robers' book were all done by Sue Oakley (Caspians IS) and in Eve Gardner's book by the late Angela Begg (Muharraq IS).

"We should remember that it's not about what is winning the most that necessarily identifies the dog as the best conformed Irish Setter. Unless we are saying that human nature has also changed during the 1960s and all dogs were judged as seen and not due to friendships and handlers at the end of the lead!!"

Well this point was as valid then as it is now. I can quote you numerous examples from the 'ealy days' and even Bill Rasbridge, who disliked Eileen Walker immensely, was known to reverse his placings when he found out that it was a Hartsbourne he had put up (and please don't ask me how he found out but find out he did!!!).

Permalink Reply by Cheryl Gorey on June 18, 2010 at 3:38am
Thanks Eva, I would have been a little surprised to hear otherwise that human nature was any different back then. I also appreciate your knowledge and advice on the sketches. Good to have the history. 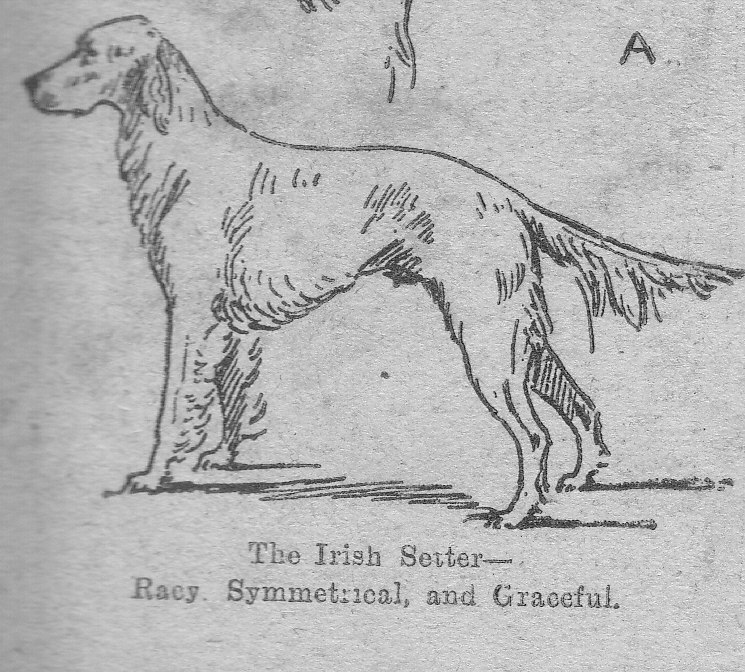 While searching for the real Mc Coy in arguments the Kristi posting beats all because it’s a one in all. But it’s the Eva revelation on human nature that made me think for the longest time. As per standard Cheryls arguments sound pretty sound to me. This is all opinion, take it for what it’s worth.

For facts, drawings show a shift on what is meant by well bend. Here another one, C.S. Stacey, thirties. Not all of it is fact, some of it is stacked fact like Margaret explained. And fact is dogs discussed were top winners and some examples for breeds standard. If you take issue with that (Eva), that’s your problem not mine.

Derrycarnes - fact is most winningest working IRS/IRWS are in direct tail male line descendants of D. Uisgebeata and IntFTCH Derrycarne Red Admiral of Rye played an eminent role in the remake of working Irish setters in Ireland.

It was new for me that according to Trudy/Frances the last dog Maureen Mc Keever campaigned was D.Courage, sired by W.Gentleman. Last Derrycarnes I saw were from Belgium and very working type like! So she had both types in the seventies.

As for the real Mc Coy, my mentor let me read all standards of all British gundogs. After that practice: three types in that kennel at the time. It ended with the statement the most important parameters of an Irish setter are not to be found in the standard. Those parameters not present in the standard were present in Ailean, every inch of her.

So Devils Dearest was and still is my favorite Mc Coy.

Permalink Reply by Trudy Walsh on June 18, 2010 at 7:15am
Henk,
I did not say that Derrycarne Courage was by Gentleman. He was sired by Timadon Donegan, who was sired by Gentleman.
One thing that I found with some of the Derrycarnes was that the top of the muzzle was not straight. It was curved, which I found very unnatractive.
I also remember being at a show where Laura Dunne was judging. I was showing Redd Boy of Wendover who was 26" on the shoulder. Maureen was showing two bitches. Laura felt that my dog was too small for a dog and should not be used at stud. She actually measured him against Maureen's bitches, one of whom was taller.
He was used at stud and produced some very nice dogs, both working and show. One of his daughters won the Gundog Group at the IKC Champ. Show.
At that time there was no height standard for the breed.

Permalink Reply by Henk ten Klooster on June 18, 2010 at 7:45am
Trudy, well you probably did not like Laura or did you? Correction taken, a Gentleman grandkid. The first Derycarne I saw -Harp, Carlsberg sister- was in 1967. I've seen slightly curved muzzles in all types, though always a small minority, but never in Derrycarnes. So we've seen different Derrycarnes! As for height, yes I remember a few big dogs above nowadays FCI-standard. And very female bitches. But for sure and that was way up in the seventies VERY working like Derrycarne Irish setters. Maybe she simply just liked ALL Irish setters but not all owners?

Permalink Reply by Margaret Sierakowski on June 18, 2010 at 9:06am
"Trudy, well you probably did not like Laura or did you?"

You are completely off the mark there, Henk!
Even at the very end of her life, Laura was still visiting Trudy's house, and as far as I remember, Laura's last Irish Setter when she was over 90 was one of Trudy's Ardbraccans

How dare you make such an assumption!

I considered Laura to be a very good friend and I think I was a very good friend to her, especially in her latter years.
I visited her on a regular basis. I brought her to visit her Doctors at the Hospitals she attended. I visited her when she was an in-patient. I brought her to Trials and Shows. I cleaned her house, tidied her gardens. groomed her dog (which I had given to her).
In short, I was a friend to her, nothing more nothing less.
She was a very strong minded woman who did not suffer fools gladly, and would put them in their place before they even knew what was happening.
She also trusted me with putting her memories in writing, for the Irish Red Setter Yearbook.
Henk, I prefer to speak about people and dogs that I knew personally. It is a shame that you do not afford me the same courtesy.

Permalink Reply by Trudy Walsh on June 18, 2010 at 3:08pm
I never had a problem with Maureen either. In fact I spent several hours in her home talking Irish Setters on various occasions. The one thing we agreed to disagree on was that she wanted to use one of my dogs on her 8 year old maiden bitch!
It is possible to be friendly and objective at the same time.

Permalink Reply by eva ciechonska on June 18, 2010 at 11:58am
Henky, why are my revelations on human nature so surprising to you? Surely your glasses cannot be that rose tinted. "As per the stanard,Cheryl's arguments sound pretty sound to me". Strange how you accept them from her when you won't accept them from me, even though we are both singing from the same hymn sheet. "That is all opinion, take it for what it's worth", whether it is Cheryl's, mine or even yours I presume.

I think you are pushing your boundaries a little too far in your endeavours to present angulation as you see it by posting a drawing from the 30's. Or are we now going back further than the original parameters. Moving the goal posts Henk? Naughty. By the way it never crossed my mind to take issue with you on winning dogs of their time, Cannot think of an earthly reason why I should.

It is not surprising that D. Courage had a profuse and wavy coat, given his sire. What is the surprise,and greater point of interest though is that Maureen McKeever had both types in the 70's (your conclusion). Maybe she too recognised and separated the show and working types in her kennel.

Permalink Reply by Henk ten Klooster on June 18, 2010 at 7:21am
"How do you compare Shandon to the points on the sketch?" Cheryl wrote.

He is better than both sketches in my opinion. Its doubtful wether last drawing shows a setter able to galop for a long time, hock and stifle are in my view over-angulated. First drawing is better in those aspects, but shows a setter not showing must be racy, first one does.

Judging from pictures in the book of show champions UK I'd say average angulation of hocks and stifles were in earliest decade of topics timeline more like Shandon, later like the Roberts book. Question is due to stacking or reality. I dont know when stacking began, Ingle Bepler still wrote "keep your hands off the Irish setter".....

Pictures can give a wrong impression heres Shandon as seen by a sculptor and active in the field. Note the sculptors version - hindlegs do not need to be overangulated for being long wide and powerful. 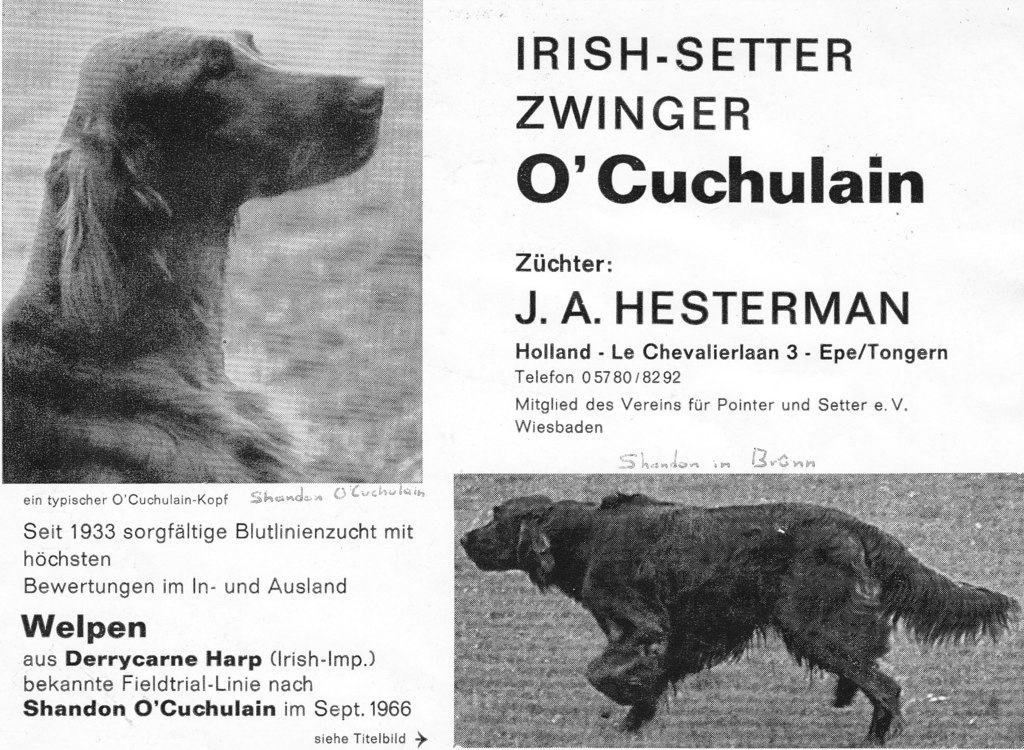 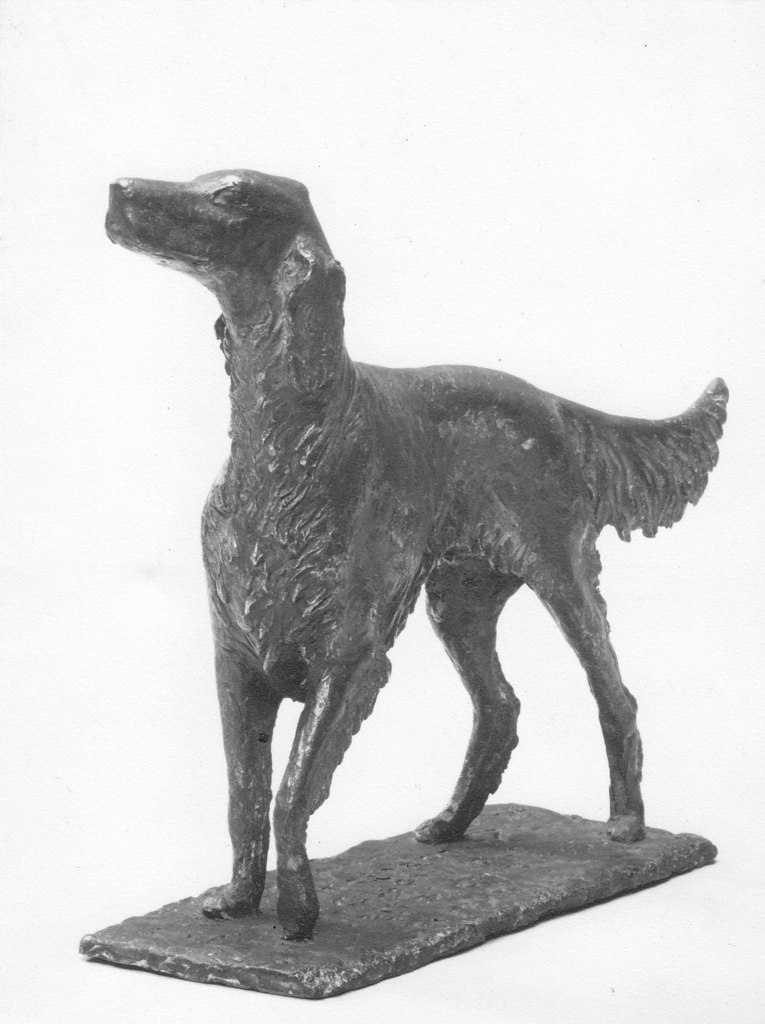