How long have you owned Irish Setters?
ages

About Me:
just an average sort of person 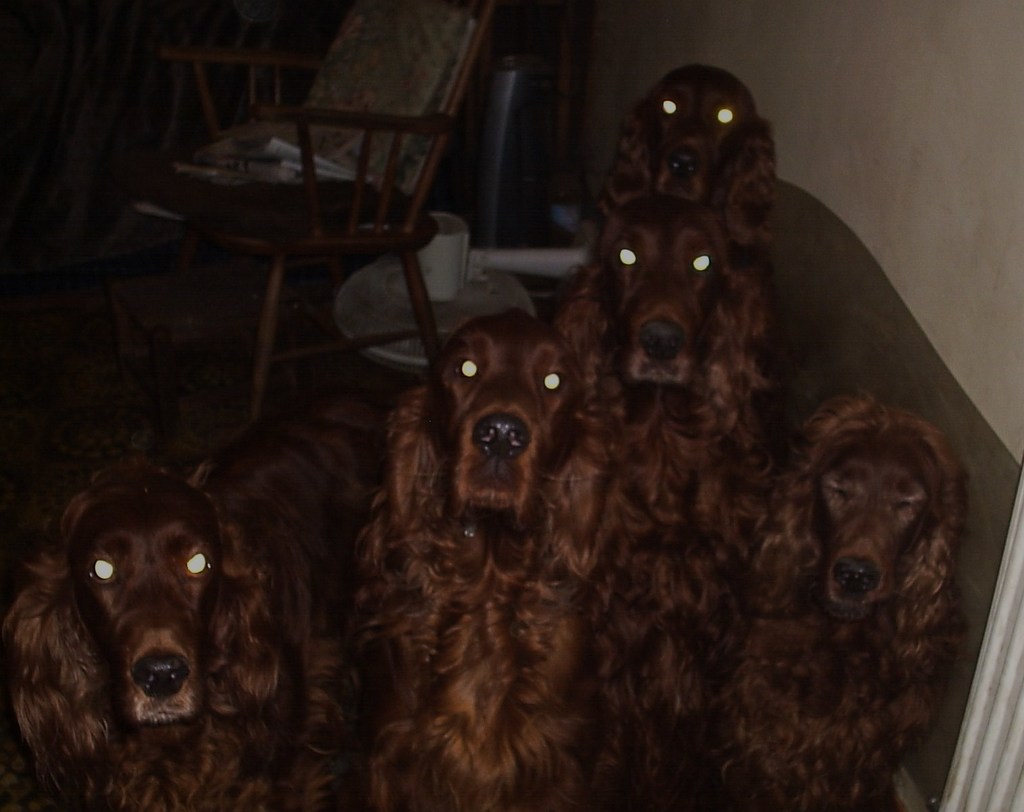 Slice of Birthday Cake
Happy Birthday June! Clancy and I ate the rest, so there is only one slice for you :-)) Hope you have a great day!
From the Gift Store

I looked again in the pedigree  of my bitch Amber and there is written Millcroft Sowerhill Matchico. I think that was made a mistake  when our serbian KC make transcript of Chico's pedigree. Many years he was the best dog in our country. In 1995 he already been of possesion of 32 CAC, 8 CACIB and 28 BOB. My Amber was his best daughter with 22 CAC, 6 CACIB and 10 BOB. Chico was a wonderful dog, my favorite type with excellent character. When he was about 8 years old, Nenad Davidovic gave him to his friend Vladimir Ramljak. I'm not sure, but I think that he past away in 2003 or 2004. In 1995 I even saved  Chico's life  but about that some other time.

I heard about  your kennel from Nenad  in 1991 and I like your dogs very much and I have many pictures of them. I presume that you read about me on my profile. Now I have a new dog Bono and trying to find a new bitch to start again with my small kennel.

Sorry for my bad english, I hope that we stay in touch.

I spent some time to find old photos and scan them. Later I  will put all in my photo album. About Chico: As I said earlier, he was a really great dog. I know that he had about 30 litters in Serbia. Problem was in that fact that the bitches  were class or two bellow his quality, but even  then he gave a good puppies,especially males.They all had a good heads and strong bodies. Sorry, but I have only photos  of my bitch and her brother Ari from the same litter.  I think that their's mother was probably the best bitch in our country at that time but she had only one litter and my bitch was the first pick puppy.

In  year when Chico came to Serbia there was few good dogs but most of dogs on shows were hunting type ( smaller dogs with lighter head, like my first irish Amos ). There was only a few reputable breeders like kennels Red Wonder, Red Irish Dream... And now, situation is very similar. There are few of us who try to do something more but is very hard to buy a good puppies from outside Serbia. Most of good dogs came from Hungary and very few from England ( like Satlas Medoc in the kennel Red Irish Dream of my friend Nenad Mocorka ). But, no one import a bitch in last six years and now all good dogs  are closely related . Problem is  also in that fact that we must sell whole litter for the price of one good puppy from England. Also, irish is no so popular in Serbia and is common that in one show we have only 3 to 6 entries in all classes. Is little bit better in CACIB shows but in last 10 years no more then 10 entries.

As I can see, there are very much excellent stud dogs across a Europe, but for me is very hard to find a bitch I like in type, of which I wished to have a female puppy. The ones I like are out of my reach in this moment.

I hope that I will start with showing my new dog this summer after seven years out of ring.

Sorry for the long letter, don't want to be boring.

Cheryl Gorey said…
Congratulations on your class win at Crufts with the lovely Abbi!

Chantal McIlveen-Wright said…
Sorry sorry June, not sure why I understood Abbi was not yours.... she is absolutely magnificent, lucky you!!!! Obviously I am not the only one to think that about Abbi, congratulations on your class win at Crufts. Plenty of cuddles to your beauty queen!!

Well done to You and Abbie of course on the terrific result at Southern Counties! A well deserved Reserve CC! The CC's won't be long following! Thrilled with the news!!!Bet you're over the MOON!

Chantal McIlveen-Wright said…
Indeed June, this was a day to remember!!  and Abbie getting the RCC!!! wow wow wow, very happy for you June, one more reason (if ever needed) to be proud of your beloved red head! You have very beautiful dog June, and we can see the results!!!!  Congratulations again and very very happy for you.

June,  Harry and I would like to congratulate you on winning the RCC with your lovely bitch Millcroft Ballad of the Moon (Abbie) and Millcroft Moon Shimmer (Megan) gaining her stud book number at Southern Counties.