Cordarragh Schubert aka George is nearly 9 months old and at Midlands County Show last week he was placed 2nd in minor puppy and has now qualified for crufts, he has gained a few over placings along the way. It's a learning curve for both of us and we have met many new friends along the way. Throughly enjoying the experience of showing. 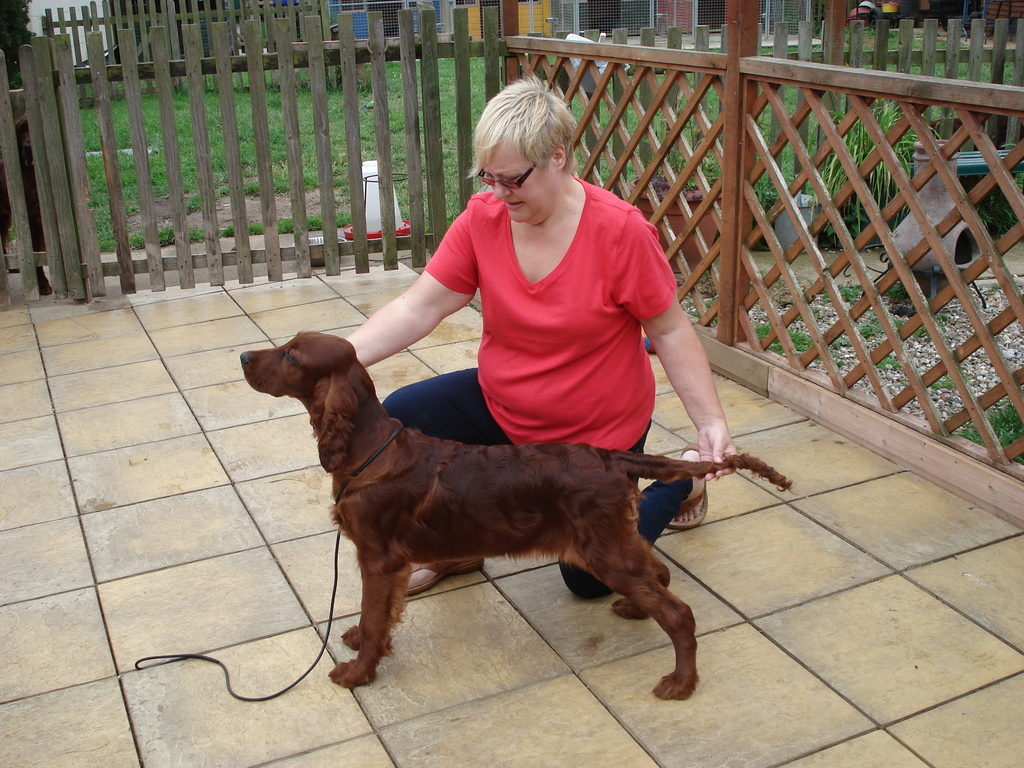 My husband along with several other setter fanatics will be taking part in a sponsored walk on 1st May at Matlock, Derbyshire. They leave from Steve Lennox's house for a 5 mile walk with many setters in tow and on their return enjoy a garden tea party - dogs included. If anyone would like to sponsor Paul and Charlie (Charlie goes twice as far as Paul) and my 7 We finally have Cordarragh Schuburt aka George home to keep Cordarragh Orinoco aka Charlie company, they are setling down nicely together and George is having great fun exploring his new home 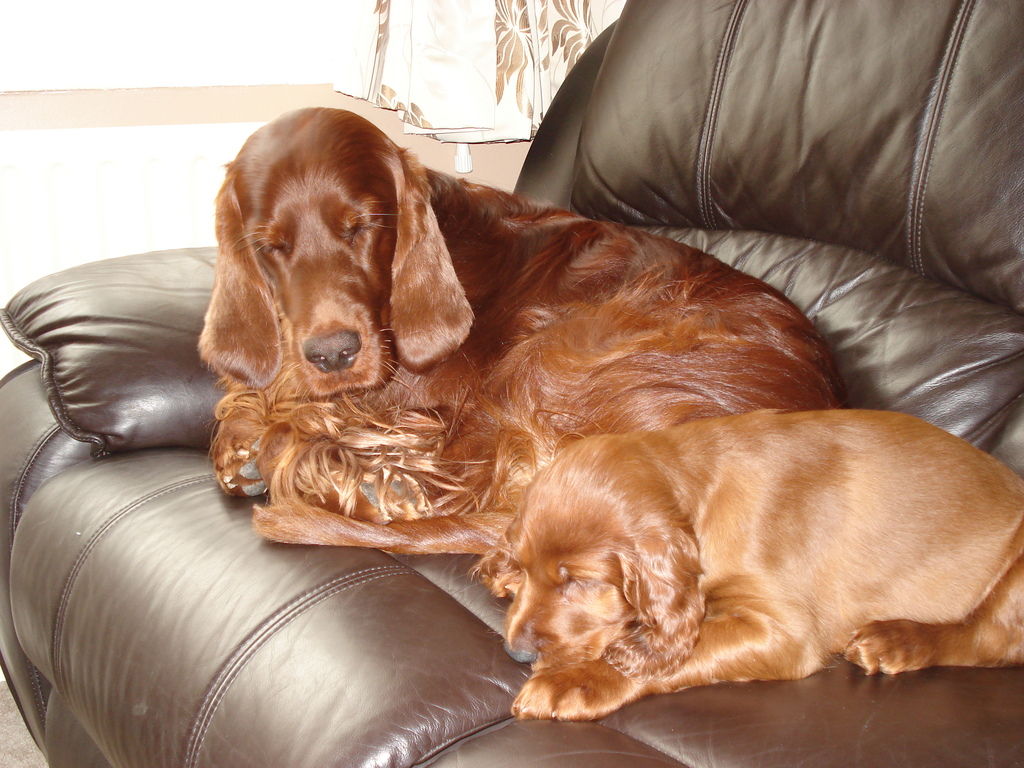 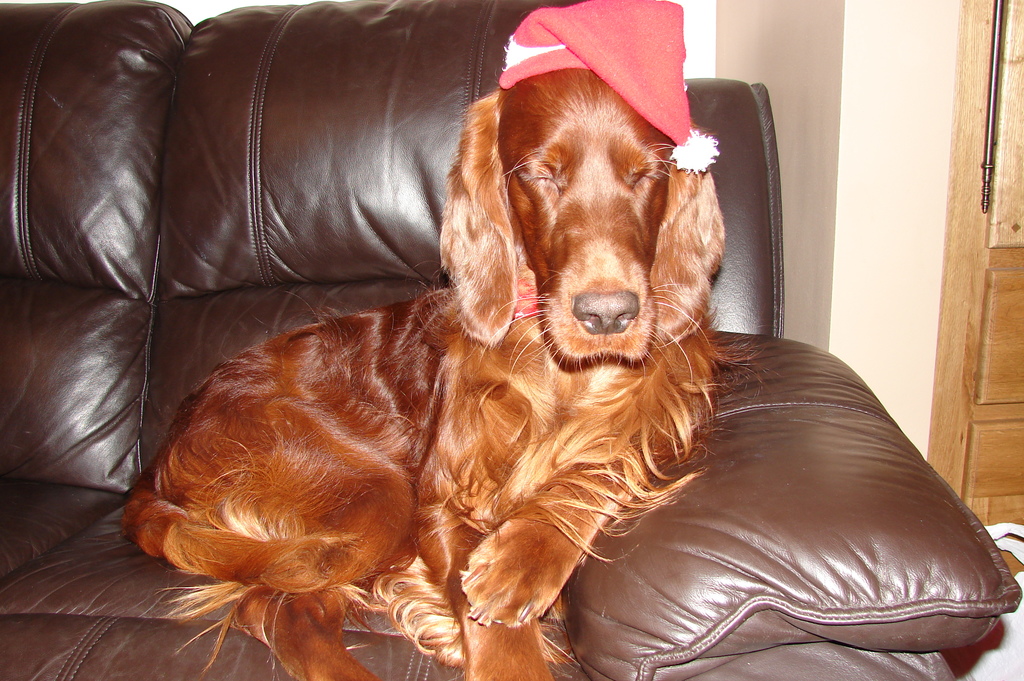 As many of you perhaps remember I took on a rescue setter in February, unfortunately he kept fighting with our

charlie and we were concerned that one of them was going to get badly hurt. So today he has gone to live with a new owner, to my surprise the rescue scheme found a home just as mad as my own to take him on and the husband is a dog behaviour specialist with gun dogs for the blind. I think Ronnie will be extremely spoilt with them, and know that although I miss him dreadfully…

We have just returned from our annual holiday without our four legged friends, we left them in the capabile hands of Dee Farndell and her husband Malcom. Unfortunately whilst we where away Ronnie who was recovering from being castrated had a bleed into his scrutum and needed an emergency op to put this right. Dee and Malcom where absolutely wonderful they took him to the vets and pressed for the op to be done asap and on his return to the kennels they expertly looked after him and nursed him… Continue

Despite my husbands determined "No more dogs" we received a call from Barbarra Rogers (ISRS) out of the blue telling of a male setter in our area looking for a new home and was we interested? Being the gulible person that I am I had to go and have a look at him, and needless to say Charlie now has a new friend. His name is Ronnie and he will be 3 in June. Having recently had a gastric by-pass I need to lay down during the day for a rest and guess who likes to join me - yes Charlie and Ronnie…

Many thanks for Freds comments

A big heart felt thank you to all that sent messages to me on the passing of Fred, its very comforting to know so many people care enough to take the time, what a great bunch of setter lovers I am meeting through this site.

Took Charlie down to Sandringham woods yesterday for the first time since losing Fred, he wanted to make friends with every dog there and most where abliging, think he really misses Fred as do I. The house fells very quiet without him not that he made much noise… Continue

It is with a heavy heart that I post this blog to let you know that we had to let Fred go this afternoon. Even after 24 hrs of intensive nursing with physio Freds rear left leg remained paralysised, he was unable to stand unaided or walk, so we took the heart braking decision to let him go and suffer no more. We will miss his carefree attitude and love of pinching food that was any where near his reach!! We have only owned him for 6 years but they where filled with great memories to treasure… Continue

Poor old Fred has landed at vet hospital thanks to Charlie - had been out to hairdresses and when I returned gave both boys a jumbone, Charlie ate his first and decided he wanted the rest of Freds (think hes trying to be top dog) he pounched on Freds back and has damaged Freds spinel nerves and he has lost control of his rear left leg. Off to the vets and they are keeping him in to give physio therapy on his leg over night and hopefully in the next 24hrs he will improve, just fingers crossed… Continue

Not put any blogs on lately about the troublesome two some! As my dad passed away 19th Dec and things have been rather hectic. Fred enjoyed his xmas presents as usual - he rips them open searching for edible ones, its a great sight to watch and really cheered us up this year! Charlie was more reserved it was only his 2nd xmas and he made me open his presents - hopefully he will learn from fred. Wishing everybody a very late happy new year. Its only the 16th Jan and we had 2 funerals already -… Continue 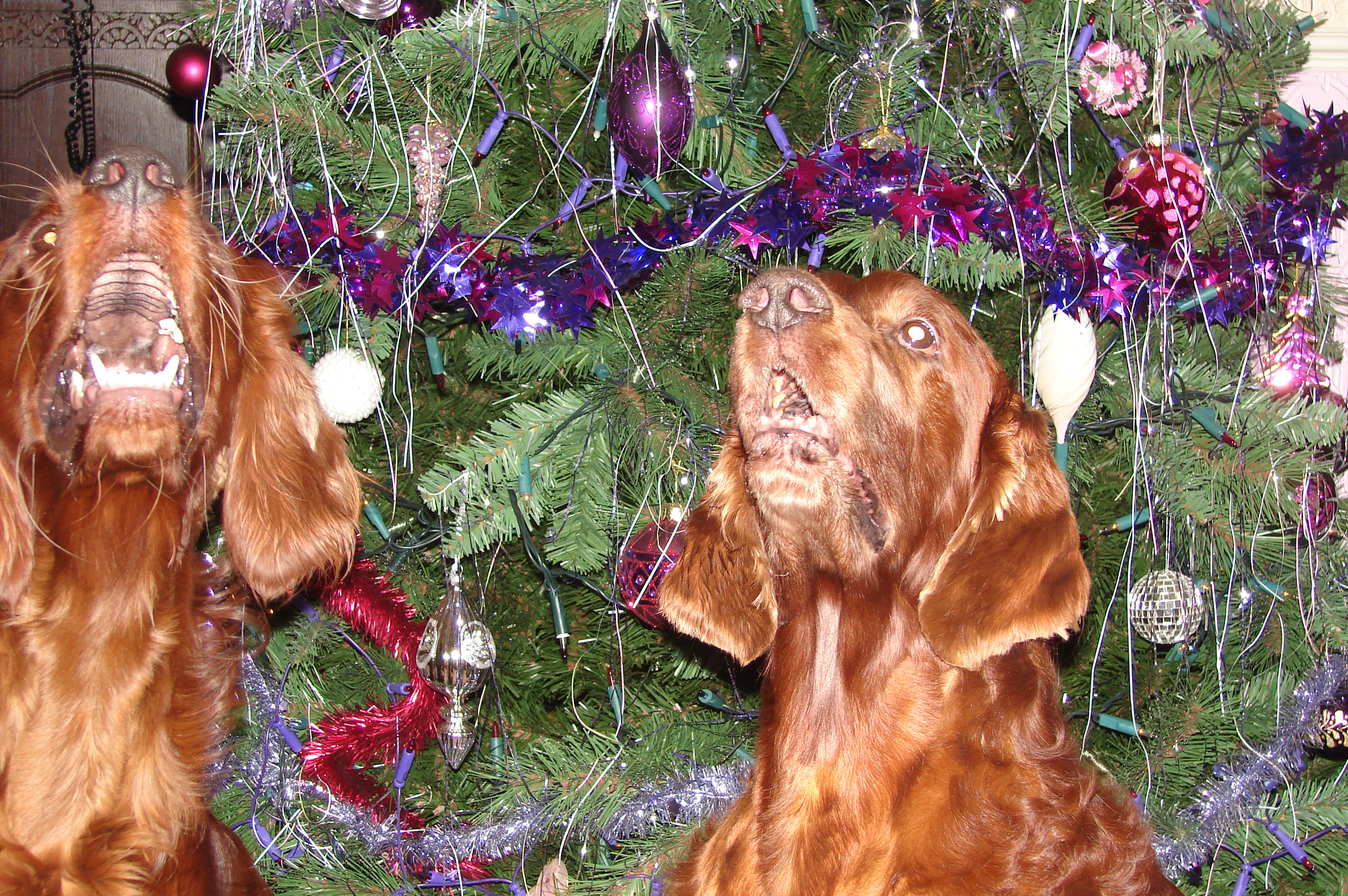 Well its that time of year again when we try to get our furry friends to pose in front of the christmas tree (given up on trying to get them to wear their santa hats!!) just need to teach my husband to hold the treat in the right position now!! Love to all my setter loving friends and your four legged companions.

Am pleased to report that Fred is looking a lot better today, hopefully with the medicine he will continue to thrive.

Our beloved Fred had gone in for grooming today, received call from Dee Farndell saying poor fred had collapsed, so I rushed back meeting husband there and got him straight to the vets. They examined him and pronounced he has arthritis and having severe flare up. Hes now home on strong painkillers and anti-inflamatory drug and ordered to rest, hopefully he will soon be his old self. Fred is 11 years old but has had a good quality of life to date and will hopefully continue to. 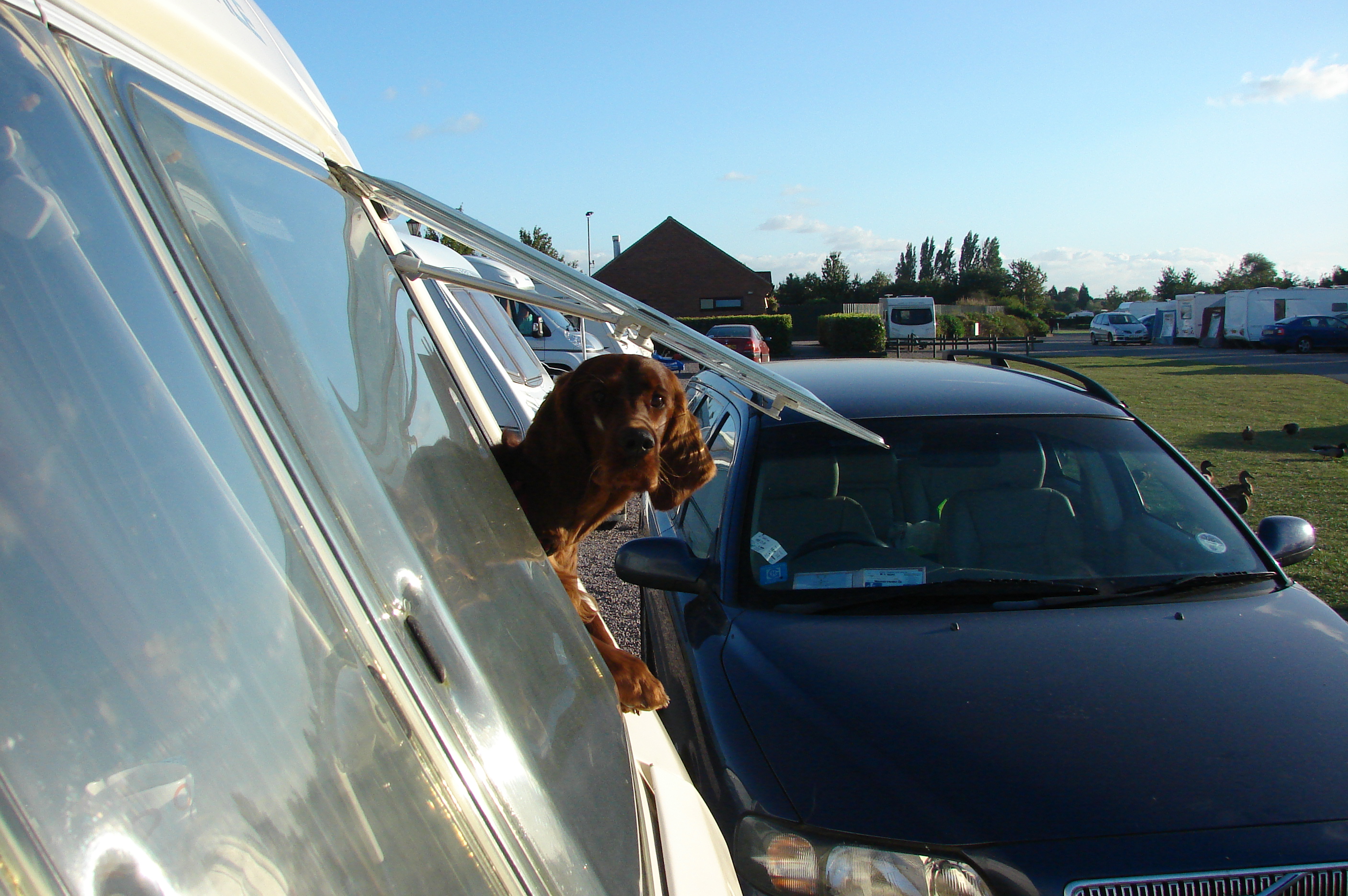 yes the boys have had their final holiday of 2009!! they had great fun as right next to the campsite was a disused road that they could have a good run up and down, and the kind farmer had just ploughed his field so Charlie took great delight in jumping over the furrows!! Fred had a go over one or two then decided it was better on the road with dad!! Well it won't be long before christmas and all the merryment that comes with it! then the setter… Continue Despite eating phones, bluetooth headsets and blowing up alarm clock Charlie has survived his first year unhurt!! Small miracle considering some of the things hes done. He was even allowed in the local hospital recently to visit my dad whose in ill health at the moment, where he got rather spoilt by all on the ward (I think the fact the ward sister has an irish setter of her own might have been one reason for his visit). I'm posting a picture of him… Continue 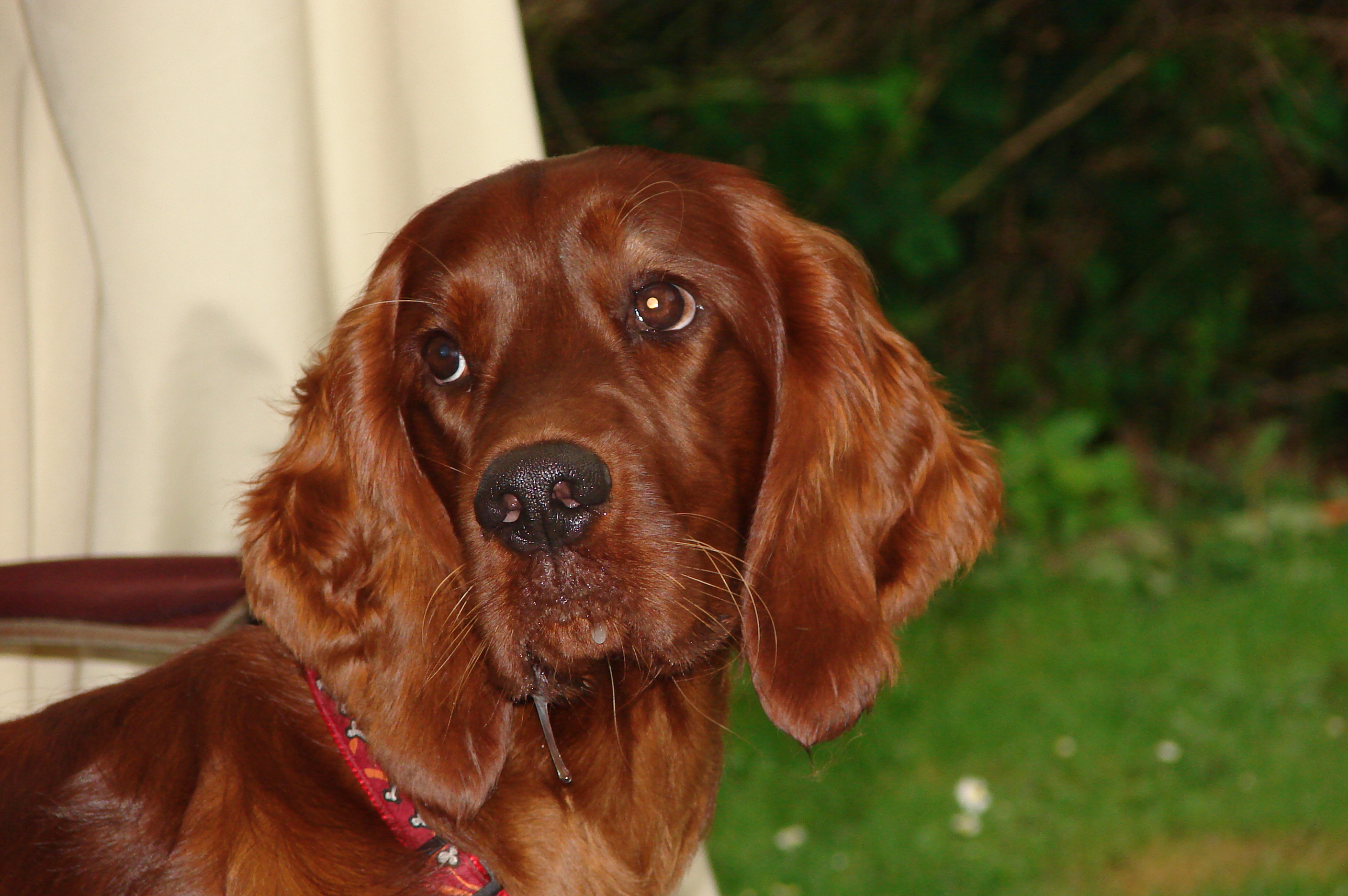 I bet all Charlies fans are wondering what hes been upto latedly? Well hes been to visit my father in hospital where he got absolutely spoiled by the nurses. Hes also blown up my alarm clock by chewing through the cable? I was asleep at the time when i heard a big bang in the bedroom, opened my eyes to see a flash and the smoke from it. By the time i put the light on Charlie was hiding behind Fred (my older setter) and looking quite innocent,… Continue 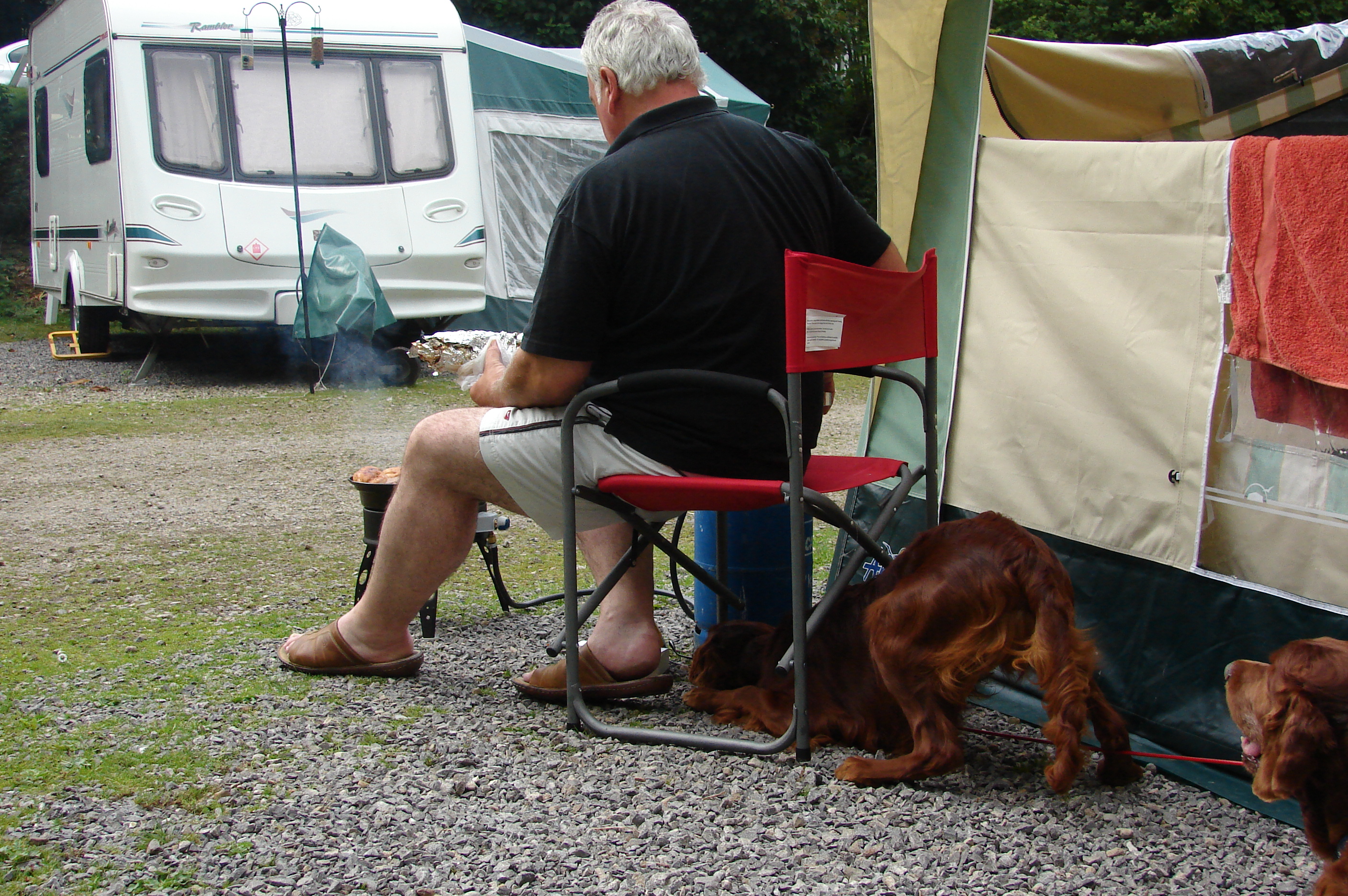 We all had a lovely time in North Yorkshire, as it was Charlies first holiday didn't know quite what to expect from him? but he was very well behaved!! He was just like a small child every where my husband went he was right behind him!!(My grandchildren are the same when they get chance to spend more than a few hours with their dads) He loved the long walks and running out on the moors? when it got really hot my husband wet him up under the water taps… Continue

I know it's usually Charlie I talk about, but not to be left out, our 10 year old Fred decided to be naughty tonite! We where having salad for tea and a suasage roll - you guessed it - turned my back for 2 seconds and Fred the old codger had my suasage roll (didn't think he could move that fast anymore!). I wonder if hes been teaching Charlie his tricks??

Off on holiday sat morning, going to be fun with the 4 of us in a caravan! Hope Fred doesn't pinch the suasages for breakfast! (he… Continue