This was taken of them at 8 weeks the night before the first puppy left for it's new home.

The first picture is of all her girls we have kept the middle girl (Sky) as my daughter want's to show her and then eventually breed from her.

The second picture in black and white is the boys we have kept the boy on the left (Oscar) the boy in the middle is called Orlando and the one on the left (Frank who got his name because he was wearing a blue collar and my daughters boyfriend is a mad Chelsea supporter and my daughter likes Frank Lampard he is the only one who has kept his name that my children named them) now has a lovely home with my parents and their lab.

My teenage daughter is a great photographer so she took the photo's whilst myself and my other 2 children helped sit the pups and try and hold them still. we are crouched behind them hanging on to bottoms and tails, Chloe would then shout duck just before she took the photo and we would then dive under the kitchen table.

We did try and take a photo of all 8 but it was a bit of a disaster so had to do it this way. 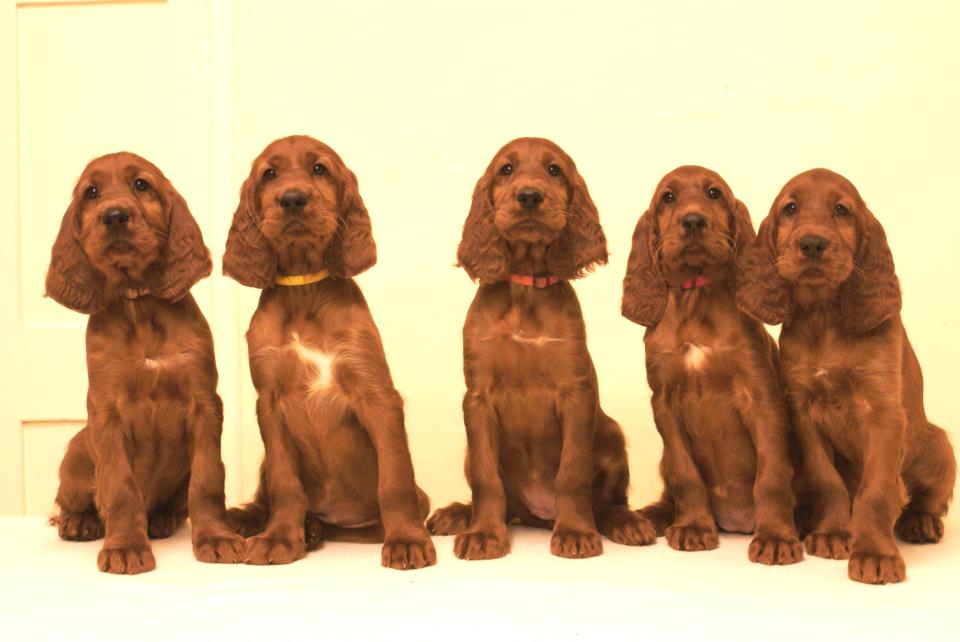 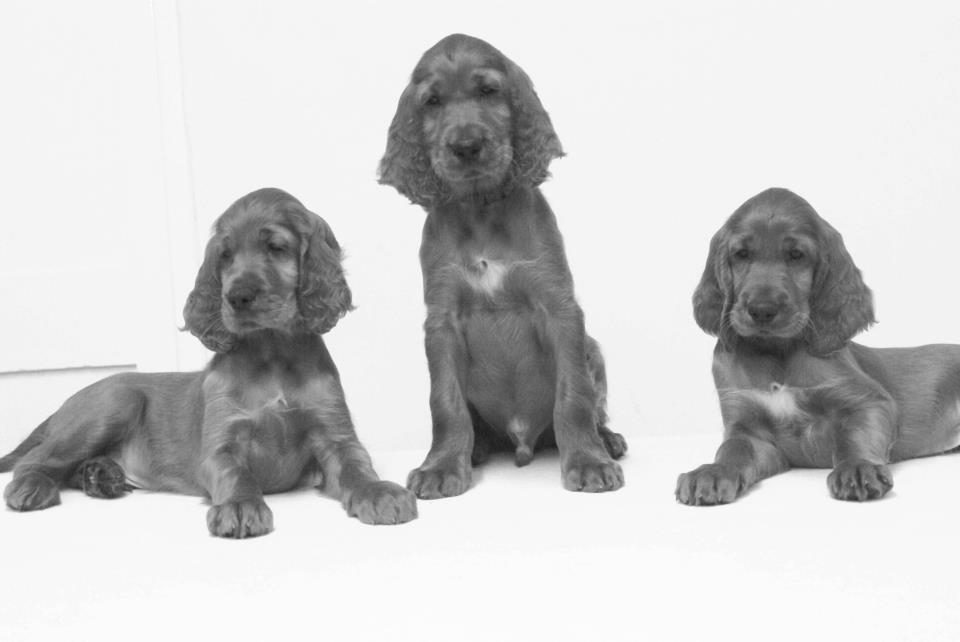 Beautiful pups! And very impressed with the photo shoot-well done!

I still feel very upset when I see photos of Setter puppies. Usually I cannot saying anything but this time I will. All your puppies look very healthy, well adjusted and happy. You should feel very proud because I believe this is your first litter. I was wondering if you had weighed the puppies or the vet had weighed them. My baby English Setter girl, Annie only weighed 3.5kg at 8 weeks of age. I am certain your 8 week old puppies weigh double this, or more. Annie was bred by a registered breeder. I will be completing Annie's story when I am able to because her story needs to be told. I believe a puppy needs and deserves the same care and love as a human baby.

Beautiful puppies Pippa, and lovely photos taken by your daughter (",)

Er, just wuthering what the heights happened to Heathcliff, Pippa?

Beautiful photos,your daughter did ever so well making it look easy to photogragh puppies

I haven't been on the site for a while as haven't been well and too busy with Christmas. I've just checked my blog and see all the comments.

James I was overruled and wasn't allowed to call the boy we kept Heathcliff he is now Oscar so still a literary great in some respects and as the pups are yet to be registered with kennel club long story as still in the processes of getting a kennel name. One of the boy might just get Heathcliff as a their kennel club name.

Finding Beau I am sadden by the thought of my pictures being upsetting and would like to know your story. For many reasons as i'm a friendly ear and sometimes things like that often help when you release all that pent up hurt,upset and anger.

I am proud of my first litter and each puppy has gone to a loving home. Their is only one couple who hadn't had setters before but already have a lab so not total novices. Every other pup went to homes where they had recently lost setters due to old age. My parents well my mum they breed setters years ago so they know the breed.

My sister gave me a wonderful present of two big canvases of these pictures and they now have pride of place each side of my fireplace, the best thing of it all is that it's my daughter Chloe's own work which makes me so proud.

She is a great little photographer and wants to make this into a career.

Comment by Dianne cook on January 7, 2013 at 12:13am
I'm way behind the eight ball Pippa and have obviously missed your blog. But after reading all the comments, you would be the one I would buy my much anticipated first Irish puppy from :)) sounds like they have had a wonderful start. Congratulations and also a talented daughter :)) take care. P.S shame your not in my home country.