Pi went to her cardiologist today for a rechek.

Her heart has no changes since her last exam which was a year and a half ago. Considering she had her nasty tick fever last summer, this is almost a miracle!

Her doctor feels like he doesn't need to do any more routine check ups, and that she only needs to come in if there are any changes, and he expects that to happen... never!!!!! :-D

Today I really, really hate being across the World

Talked to my dad, who told me that Romã is getting fatter everyday, despite the diet she already is on. He also thinks her belly is changed and now looks like a "beer belly". He believes this has got to a point where we can't consider it normal anymore.
Tomorrow my dad is going to drop off Romã at a friends house, who is a vet and works at our University Vet Hospital. She'll be completely checked to see if/what is wrong with…

It's been a really long time since I posted anything here on ES, but after this long break I've decided that today is the day I'm returning to action here in ES!

I'd like to tell you a bit on how we are doing after so long:

Pitanga is 6 years old now, and nearly died this summer due to a nasty tick fever. Her heart got a bit worse from that, and as a consequence she also has arthritis. She is stable, fat and happy and when I return to Portugal I'll start…

What we've been up to!

Hello our ES friends! You may have noticed we have been much less active here in ES lately... well we have a very good reason:

We have been very busy adding some new skills to our list: I'm taking my first steps into proper dog training: Clicker training to be more specific - very time consuming!

And of course, Pitanga and Romã have been as busy as mee, helping me with my new skill!!!

The first day of the rest of her life...

I went to pick up an abandoned English Setter bitch that had been rescued Friday by a lady who couldn't keep her. I was supposed to pick her up (I was closer than anyone else in our unnoficial setter rescue mission) and evaluate the situation: physical and mental condition. Then tomorrow a friend should pick her up to go to a temporary family, until a suitable owner was found.

I found a very thin girl, with a…

Romã has always been a very shy girl. In fact she was so shy as a pup, I decided I should keep her and not one of her brothers, out of fear of what might happen to her in the wrong hands.

For the past 3 and a half years, we continuously worked on her socialization and her confidence in dealing with new people, of all ages and genders. Very slowly, she became more confident near strange people, but crowds and children screaming have never been her favorite thing. She adjusted quite…

After a rough year, I decided to make a big deal out of my girl's B-day, and for the first time ever, she got a party and a cake! Since we were all day at the Uni, her party was in an unsual place... The parking lot (no traffic and at this time and all vet students, so aware of the dogs, no worries!) 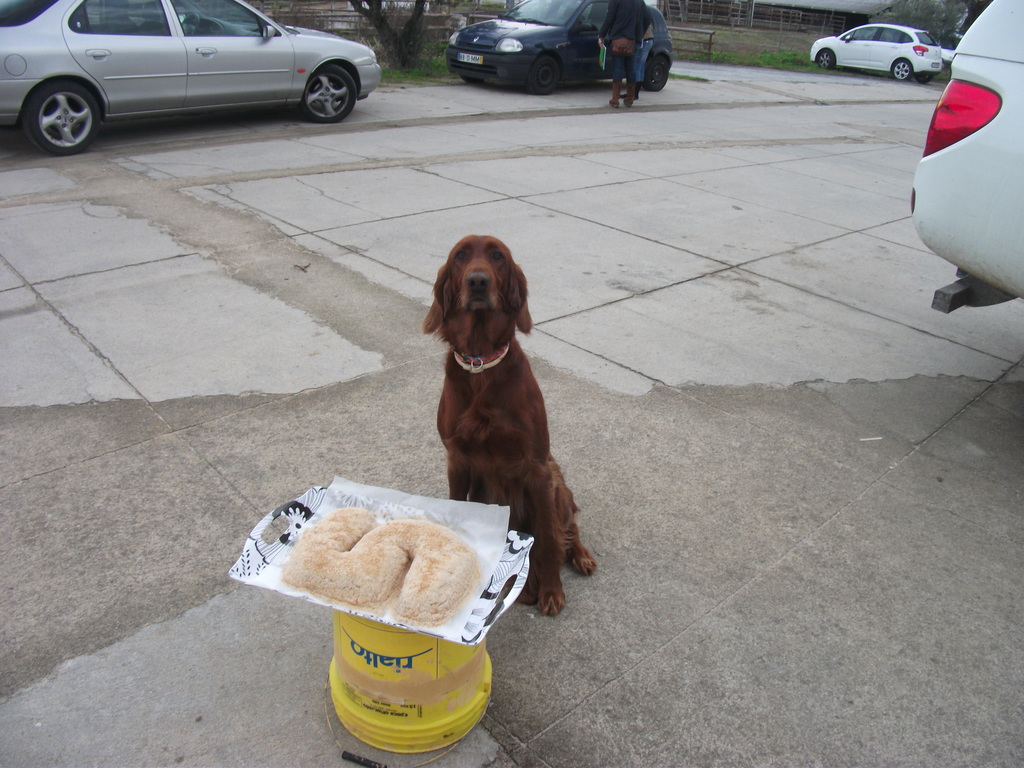 After the picture, it was time to share the cake with her friends.…

What we've been up to!

We've had some crazy weeks lately, so there was not much time to keep you up to date!

Pitanga is doing OK with her medication, but she's definetely not the same dog she was... A 30 to 45 min daily walk is now more than enough for her. Other than that, she's perfect!

She'll be evaluated soon and we'll see how she's progessing!

Romã had piometra and had to be spayed. Not a big deal, it all went well and she's back to her usual self.

We also have Ginja with us, who…

Today is your 3rd Birthday, and you have never been so beautiful and amazing as you are now. You trully are a lady, and have improved my life in so many ways, I can't even remenber how my life was before you were born.

You have gone from a grumpy baby who did not like her milk to a soft, gentle, kind, good hearted and bright lady! I guess I could go on foe ever describing all the ways you amaze me everyday, but the important thing to remember is you are the…

Pitanga is now recovering very fast - she has decided to make my coleagues and theacher's lives a living hell and tries to bite them whenever its injection time! I have to be there if they want to do it with no fuss. She is tired f living in the hospital, is tired of her IV and misses her long runs now that her fever is gone. We have now taken a total of 80 ml of pus from her abcess and there is a lot more to come!

And now, I must make a long note about poor Romã, who I forgot…

Just a quick update on Pitanga, it's been a really long week...

This huge abcess explains her high fevers and most of her…

...And now it's Pitanga's turn to be ill

Yesterday Pitanga was not herself, not interested in running around or playing with her friends. Took her temperatura and she had a fever, and as I moved her tail, she yelped in pain, so it was X-ray time.

The x-ray revealed an image that is typical of a disc infection, that is very very painful. She has started her antibiotics and is on very powerful painkillers, just to keep her able to go outside to pee and poo with a…

what would you have done?

I just lived a rather unpleasant situation, and I'm not exactly proud of myself, but at the time, no other action crossed my mind.

I was in the park (not a dog park, there are none here, so dogs are allowed in regular parks as long as they behave) with my 3 girls. We were completely alone and they were very quietly sniffing around and playing toghether.

Then, out of nowere, this boxer bitch arrived to the park, alone, unleashed. We already know her,she is not exactly…

So my oldie Ginja got sick two weeks ago, and had to come live with me for a month, because I'm the only one who can give her pills. Pitanga and Ginja aren't best friends, so having them toghether for a long time can sometimes be a big problem - they both want to dominate.

But this time something amazing is happening. Ginja, 9yrs and a half, has now some degree of hearing loss, and no longer can hear me at the same distance, or can she realise a car is coming and so on. This, of…

A little help from you guys!

I was wondering if the lot that has facebook could help me and my girls out. It's really easy, just go to this link, and "like" the photo:

This is Pitanga, the first time she went to the beach, having a lot of fun with her stick! The…

I'd like to introduce you to a very special boy - Torrão. He is a rescue english setter and  I picked him up for a friend a couple of months ago. He stayed with me for a night and then went to Lisbon to his new mom. He were able to find all of his story, wich is not the nicest of stories, but that is all in the past.

The dog I picked up from the pound was so terrified he froze on his way to the car. In just 24hrs, the diference was unbelievable! Now his mom has…

Remember sweet little Trigo, our most recent adition to our pack? 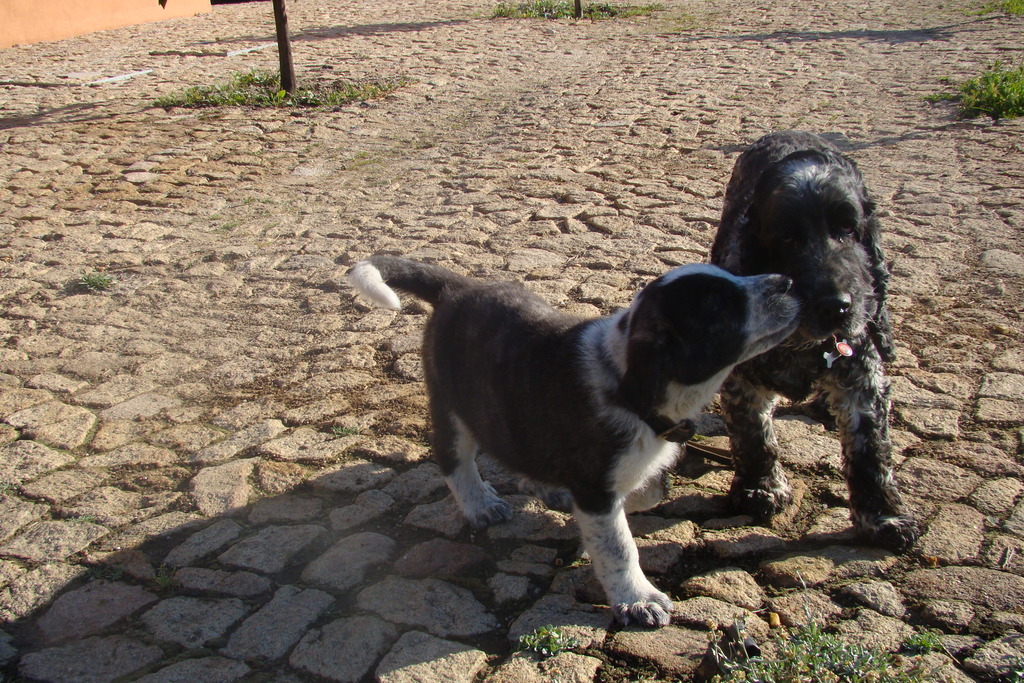 I posted a realy nice photo of a little furball, just like this one, and have been hiding him from you guys ever since! =)

Here is Trigo, a bit bigger now that he is 8 months old! He's also becoming a really good guard!…

First of all, Romã has asked me to thank you all for your kind words and support. This was a specially crazy week, so I didn't have time to post our news right away!

Romã repeated her blood work on Tuesday, and the improvement was almost unbelievable! Her platlets were almost back to normal: on Saturday she had 24000 and on Tuesday 173000. Considering the normal minimun is 200000, she had a pretty good recovery just in 3 days! All her other blood…

Again with our bad luck!

Every once in a while we have one of those episodes that are just bad luck. This time, it's Romã who is sufering trough it. The exact same thing happened last year to Pitanga, so I guess this year was Romã's turn... Who would have guessed that a thing that has a 0,1% chance of happening would happen to me....twice???

Romã woke up yesterday with no hunger, and feeling a bit under the weather, but with no fever or anything that would make me too concerned. This morning, she…

Pitanga: Cutter than a pup! =)

Last night, I had a field trip to a chicken slaughter house (...my life is perfect...) and I had to leave my girls at home alone, from 7h30 pm until 4 am. Whenever I have to be gone for longer than usual, I leave each with a nice cow skin bone, to keep the entertained.

They know what the bone means, look quite sad and go to their little beds, where they get their consolation prize for being left alone. It does the trick, they know not to expect me by the door. =)