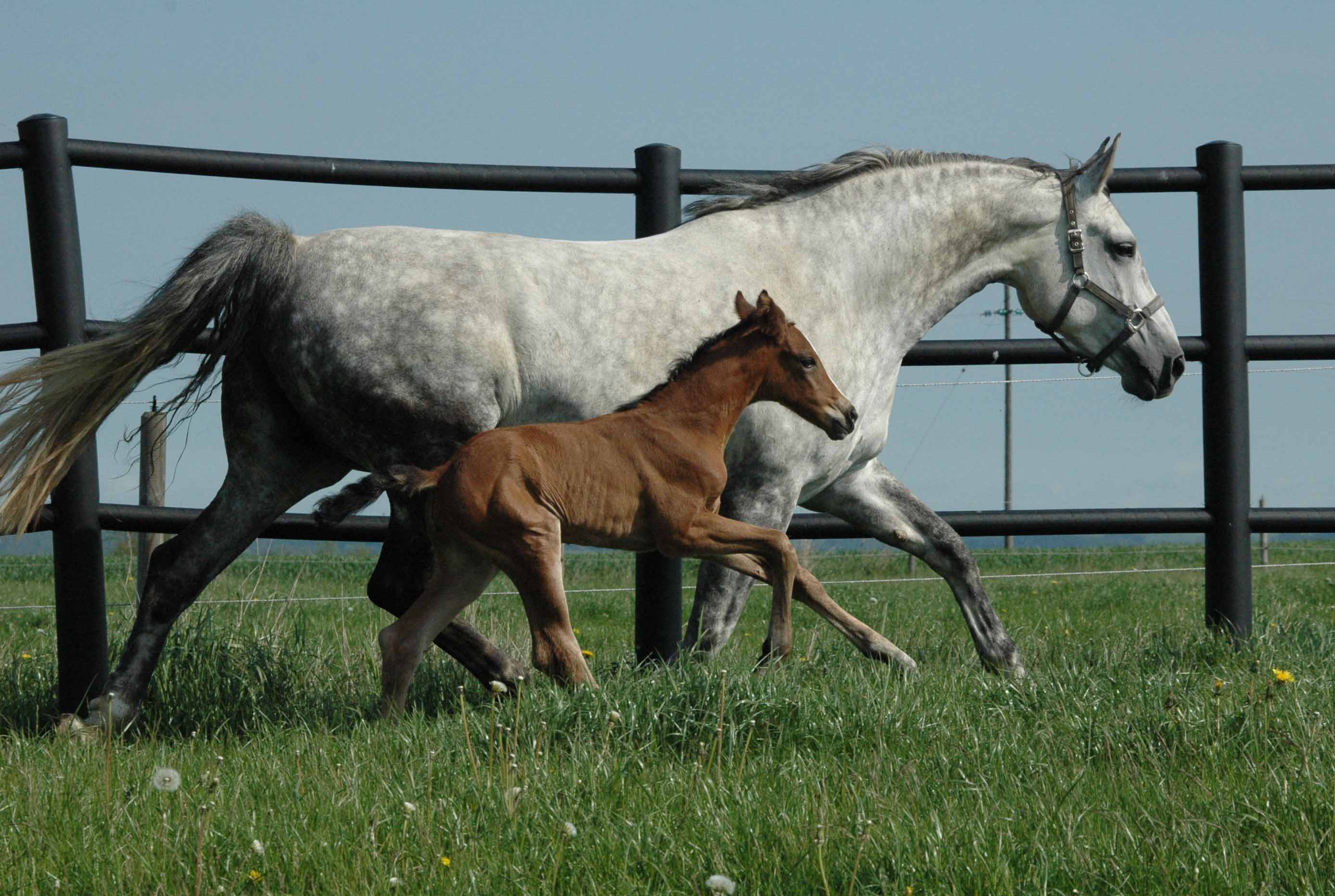 We had started Ivy up after her foal and all was going smoothly.
She loved being back at work, even if it was only in the padock with her foal running next to her.
One night she suddenly got stomach ache. Alexandra walked with her for ages, but instead of getting better, it got worse.
So Ivy had to go to the animalhospital and was operated on instantly. The operation lasted for 6 hours and 6 meters of her intestine had to be removed due to a twisted intestine. Against all odds, she survived the operation and although it was a matter of life and death for a week, she was going to make it!
When we brought her home, she was her usual (hungry) self.
Once again on a strict and controlled diet, she stood in her box calling for constant attention...like...Hey! Someone forgot to feed me! She went for long walks and behaved just as she had before the disaster.

To begin with, there was the small problem of the foal calling and Ivy calling for her foal. She had after all had her whole stomach cut open and could do without a hungry foal. But things were calming down on the second day and day three at home was much calmer.
She was being walked and was very alert.
Until it was feeding time...
Ivy, whos main interest in life was food, would not even look at her foodbowl.
Back to the animal hospital.
And then things went from bad to worse.
She was put down on the 8th of december, only 8 years old.

A brave jumper that never gave up and would have a go at any fence...a super mum (ah well if you dont take into account that she kept trying to steal the foals food).
We are so happy that we at least have her foal...and if the foal is only half as good as her mum, she will be a great horse!

Take care of all the ones you love, sometimes life is far shorter that we think.

Comment by Marta Galuszka on December 11, 2009 at 3:41am
Really sorry to hear that you lost your beautiful Ivy...
Glad that you have her foal. Hope she will be as wonderful as her mum.

Comment by Carmel Murphy on December 11, 2009 at 3:58am
So sorry Ursula and Alexandra for your very sad loss. She was an absolute beauty!!!! Hope Ivy's filly isnt missing her too much?

Comment by Susan Stone on December 11, 2009 at 4:13am
I am so very very sorry to read this post, Ursula. I thought (as I know you did) that things were looking brighter. My thoughts are with you and Alexandra. I know you will both be heartbroken. Ivy was so beautiful and very much loved, what a tragic turn life can take.
I hope the foal will continue to thrive and bring you joy in years to come.

Comment by colette tuite on December 11, 2009 at 4:23am
I am sorry to hear your very sad news you must be feeling devastated. I hope your lovely foal will bring you some comfort.It is sad to lose an animal at any age but it is worse when they are young.

Comment by sammi pease on December 11, 2009 at 4:29am
Sincere condolences Ursula...she looked like a beautiful girl.....how sad for you..your last comment is very close to my own heart, especially at Christmas time....wishing you all the best with her legacy.....

Comment by McBIRDY - Jean DUHANT on December 11, 2009 at 4:51am
Don't know what to say to comfort you !
Ivy was so beautiful ! Give her foal all the love in place of her mother !
We are with you in those difficult moments. Take care !

Comment by Johanna Blacklake on December 11, 2009 at 5:05am
I'm so sorry about your loss. I wish all the best for the foal's future. The precious memories of Ivy will remain in her.

Comment by Nicole Wilson on December 11, 2009 at 5:38am
This is very sad indeed. I'm very sorry for your loss. I hope you will find comfort in having her foal around and watching it grow and develop and giving you joy.