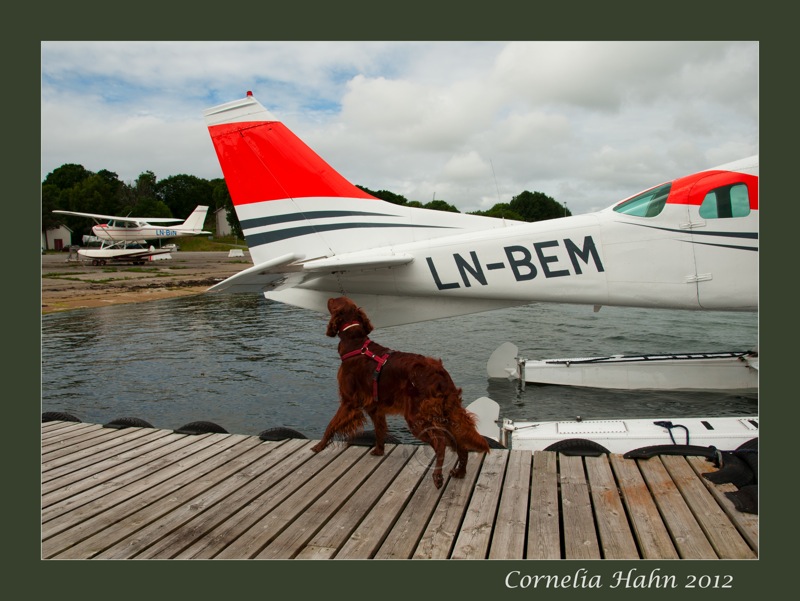 Hello again! Let's continue our adventure through Norway! You might remember from my last blog, that our 'ingredients' of this trip was: A bad weather forecast, an active and full of energy Setter (me) and two keen photographers. Luckily all of us share one great hobby: Ornithology! So we went to look for birds - the one above is one kind of birds he likes very much but like the one below, it smelled really strange: 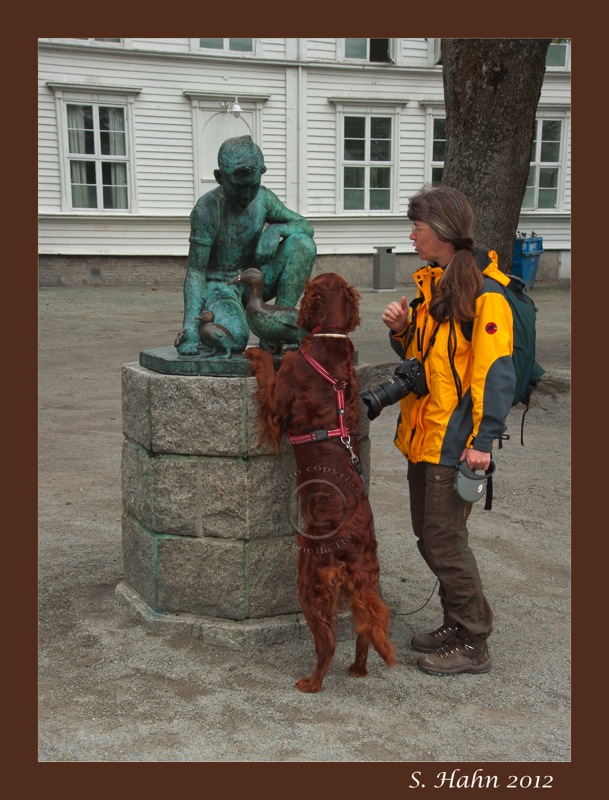 This smells great!!! But no birds here; she said it's not for birds but for crabs: 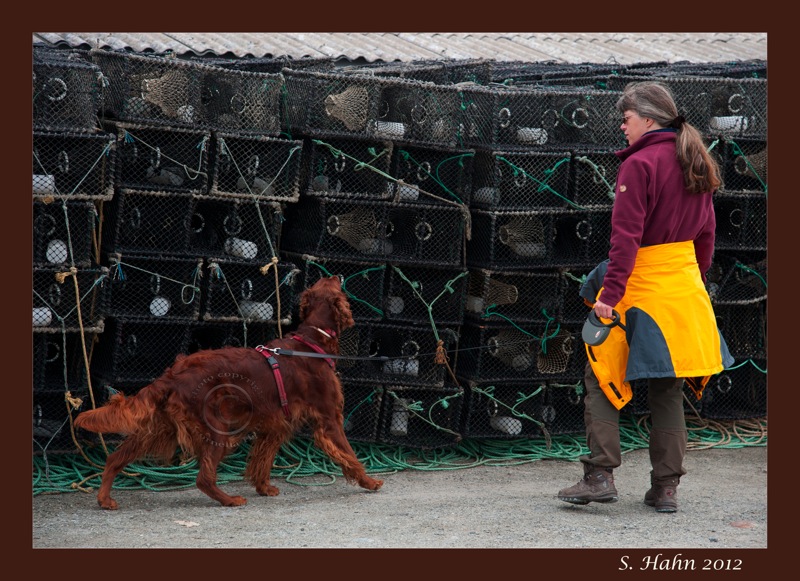 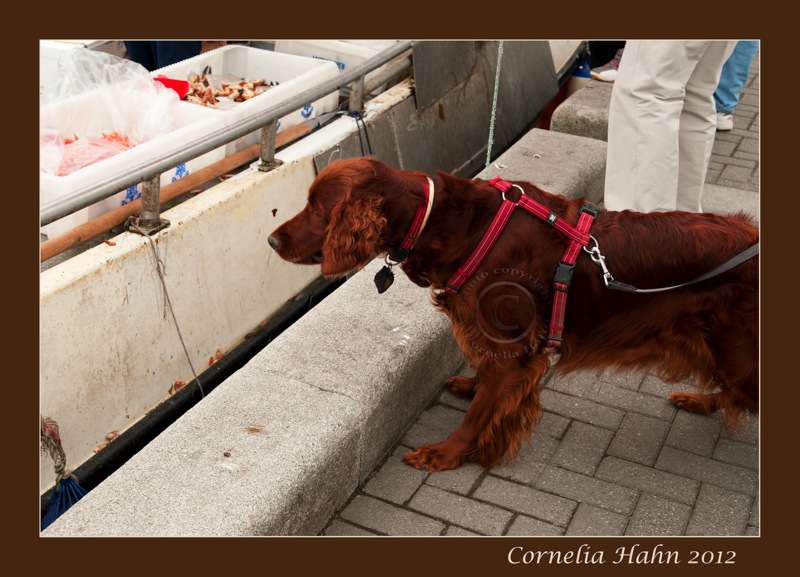 This creature here does neither smell nor look like bird: 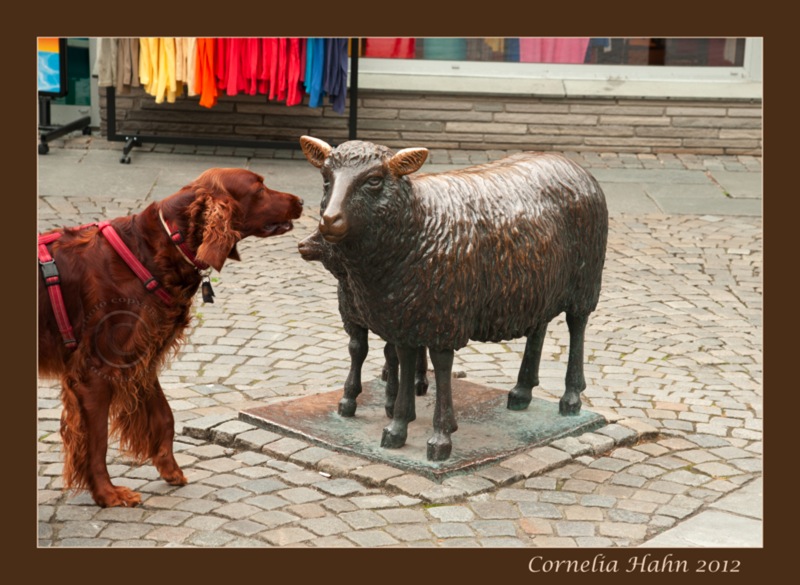 Then the weather improved for a day or two and so we hurried up into the mountains again - this is the habitat of the Black Grouse - we've seen many birds here and other beautiful things, but no Grouse: 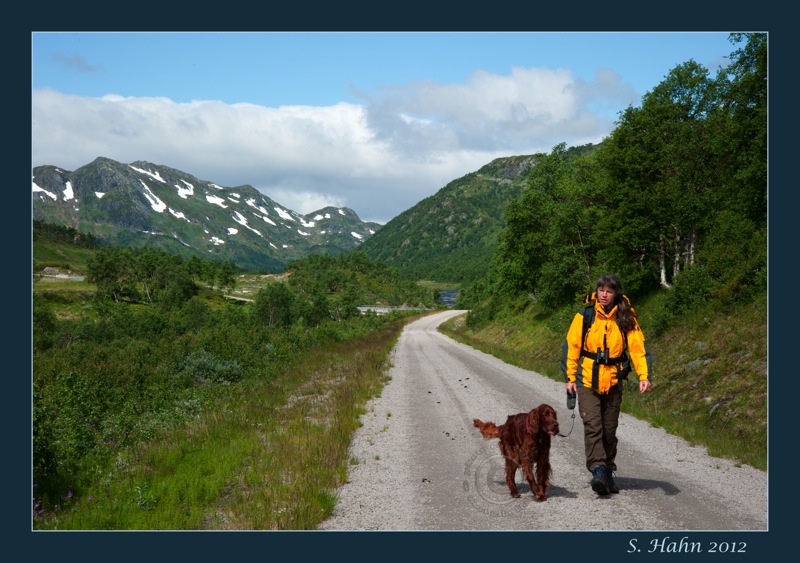 Sad but true: Although there are still some, they are in decline even here and an elderly, now retired hunter (and former Setter owner) told us, that he'd seen none anymore for the last two years. Honestly: I would not have disturbed them, chased them or flushed them out of the bushes - she always says it's their place, we're the guests! 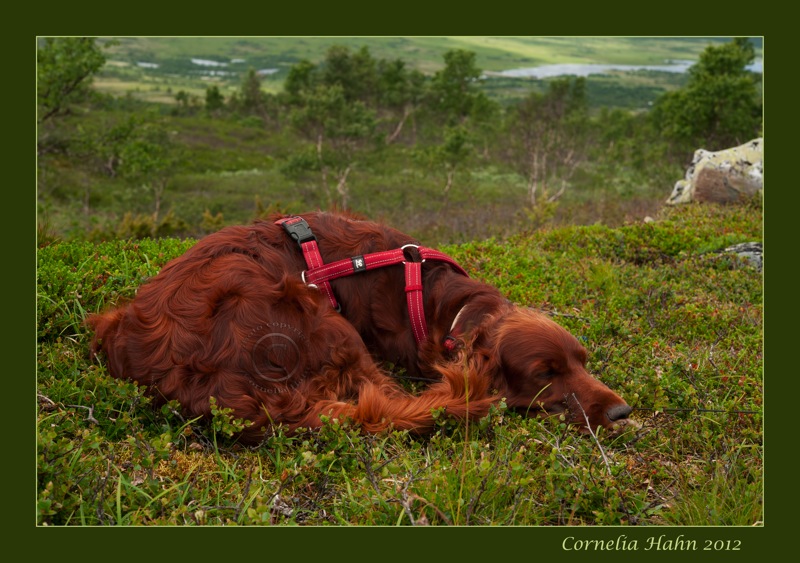 So we went back to the coast. South of Stavanger there is an area called Jaeren; it is one of the largest birding areas in Europe, spread over more than 1000 km2 and with a coast line of 65 km of sandy or partly stony beach. This Arctic Tern (Küstenseeschwalbe, Sterna paradisaea) was sitting portrait on it's pole: 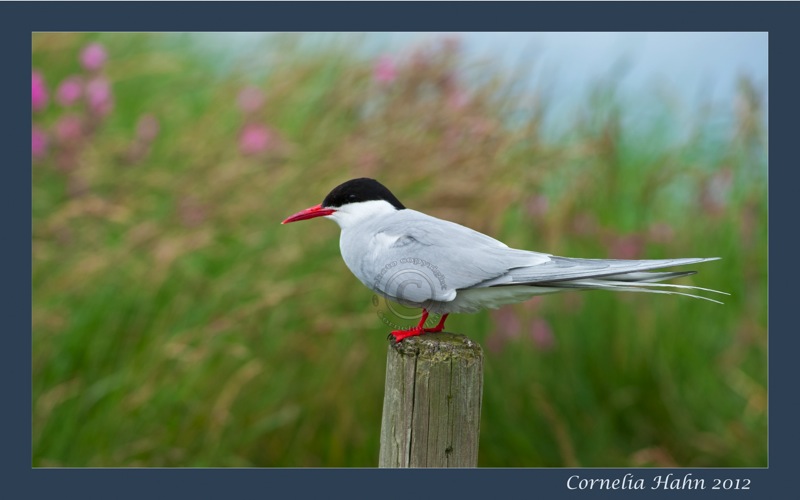 This is a young and still very fluffy Oystercatcher (Austernfischer, Haematophus ostralegus) exploring the beach: 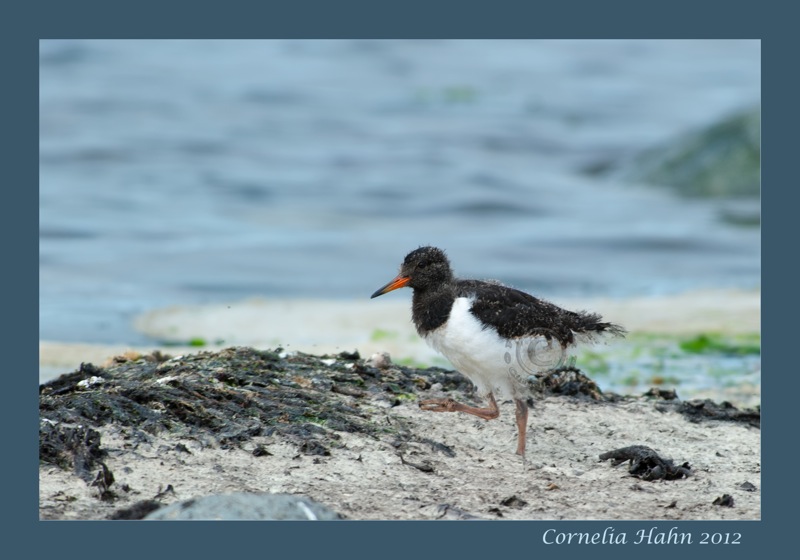 A Northern Lapwing (Kiebitz, Vanellus vanellus), also known as Peewit or Green Plover is watching us, so that we do not get too close: 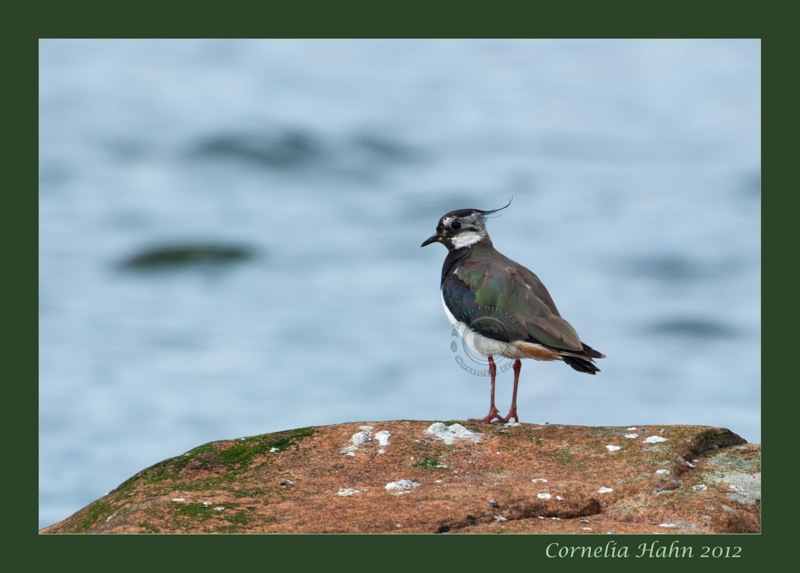 We also went several hundred kilometres further north to the bird island of Runde, a nature reserve near Ålesund. This Great Skua (Grosse Raubmöve, Stercorarius skua) was sitting less than 20 m from us on it's nest: 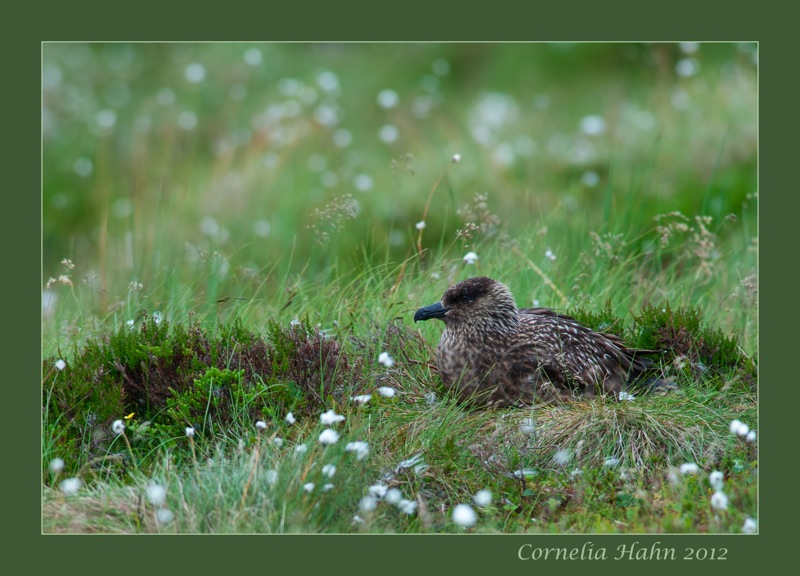 The Skuas can be quite aggressive and attack intruders, but in this nature reserve, where they know, you only shoot with a camera and do not leave the path, they were very friendly even with me. This is us on the path near the Skua: Last but not least, the reason, we went all the way up (again!), the Atlantic Puffin (Papageientaucher, Fratercula arctica), the clown among the birds: 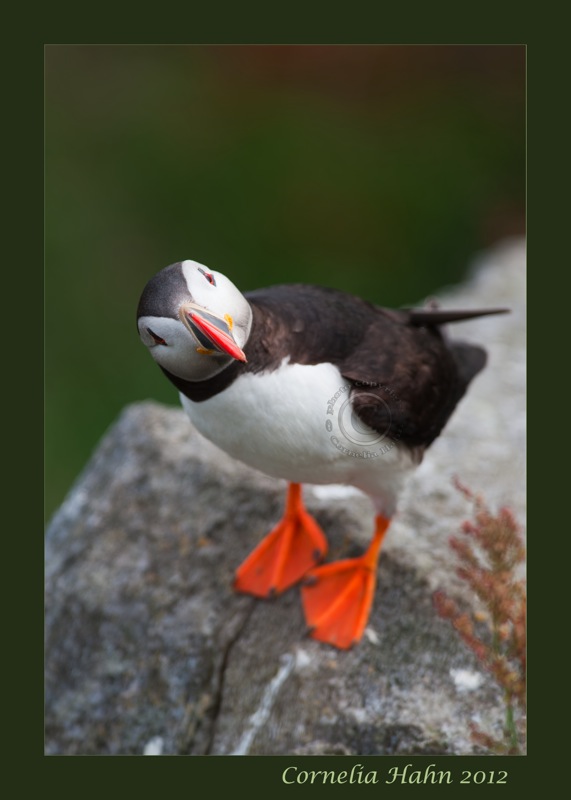 We were there last year but could not stay and were therefore not able to take any photos of the Puffins because they come back in from the sea only in the evening, between 7 and 9 pm! Some youngsters seem to be hungry: 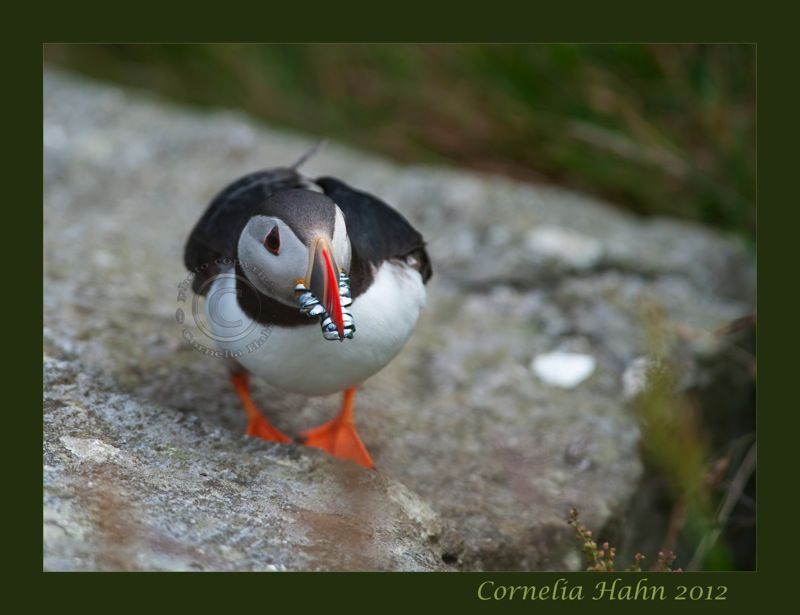 All in all, we've seen more than 80 different species and I could show you only some of the birds. She also just reminded me that my blog must come to an end now and that I have not even mentioned one of the many beautiful orchids or other flowers, we've seen! So, until next time then!

Lolvey, as always!
I always have a tough timeexplaining to my girls why we can't go to the same places you go! =)

Nice photos and story. What a lens!!!!

Thank you! @Jarno and Robert: It's 'only' a 300mm lens, but the f2.8; combined with a 1.7 converter this gives me a handholdable 500mm f4.5; the largest part at the end of the lens is the lensshade. The Puffins were frame filling, only 4-5 meters away!

beautiful story and photos, your camera has really fine cannon!

I'd be glad to look at orchids and other flowers:-)

WOW Cornelia! Super photos and story  - always so entertaining! Love the fluffy oystercatcher, and Puffins - well, I have them on my "to-do list!" Have always loved this bird since we were taught about them in primary school in England. Want to see them properly one day. :):):)

the weather may have been bad, but your pictures shine through

Comment by Maggie Smith on November 21, 2012 at 6:39pm
Great photos Cornelia - much to be admired. Joy is looking rather lovely