The story of Robin

A few weeks ago I saw an advert on the web, a six month old Red Setter puppy was for sale, the advert included a picture, and that picture spoke a thousand words!

Robin was the puppy's name and her ribs were sticking out through her, each one of them could be counted, she was like a skeleton with red skin clinging to the bones. I contacted the seller and purchased Robin. As soon as she was safe in my home, a friend of mine rang the seller and chastised him! He denied owning Robin and said that he only sold her for a friend of his. If his story is to be believed, then Robin had more than one bad home, no one will ever know the truth of what happened in Robins past, except Robin herself. We can only guess at the sad story she would tell us, if we could but understand her doggie chat and the sad whines in her nightmares!

Enough about past history, Robin has now turned a corner, and I for one pledge to ensure that the wrongs of the past will never again be repeated in Robins life, for as long as she lives and as long as I live!

When Robin came she was very agressive towards my other dogs. She would growl and snap at them, and because she was so agressive they didnt befriend her either, so I put Robin in a pen where she could see and hear and sniff my dogs without being able to bite or injure them. Day one went by with meals on the hour for Robin, she could only eat a tiny bit at a time, her little tummy couldnt handle anymore. Day 2; she was getting meals every two hours and putting up weight. By the end of day 4 she was on 4 meals a day and eating heartilly! Robin was also afraid of open spaces to begin with, and she had no muscle mass at all, it is very likely that she was kept in a confined space with little or no exercise and even less food and water! Electrolites helped rehydrate her, and she was treated for internal and external parasites, given calcium and vitamins each day and when she improved she was vacinated and microchipped, received her first collar and harness, and became the light of my life!

It was Katie my Gt. Dane (my wise old lady of 11 plus,) who figured out Robins needs far better and sooner than I did. In her wisdom she must have seen and understood Robins fear. Behind my back Katie opened the bolt on Robins Pen, pushed the door in and boldly walked up to Robin, ignoring her snarls and snaps. I watched in amazement as Katie just stood there and allowed Robin the space to gain her confidence. Next, one of my other dogs; Tiger, came on the scene, and she picked up a toy and threw it at Robin Hey presto! The playing started and never stopped, and it has continnued ever since, with Robin being very attached to a squeakymat toy with a long fluffy tail. This toy is often found between her paws or under her head when she lies down! I couldnt envisage being without Robin now, she pours her whole heart and soul into loving me and making me happy. Robin has certainly given me a lot more since I met her than I could ever hope to give back to her in a whole lifetime! Did I rescue Robin? Or is it Robin with her zest for life who has rescued me from relative boredom and shown me a fast moving world full of Red Setter joy? 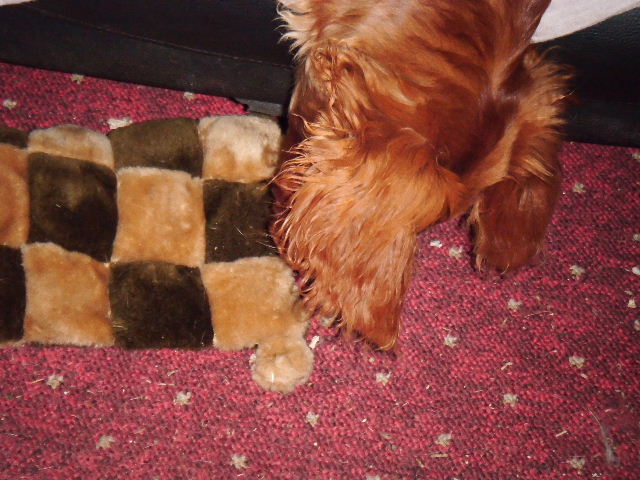 Robin loves her harness and canicross! 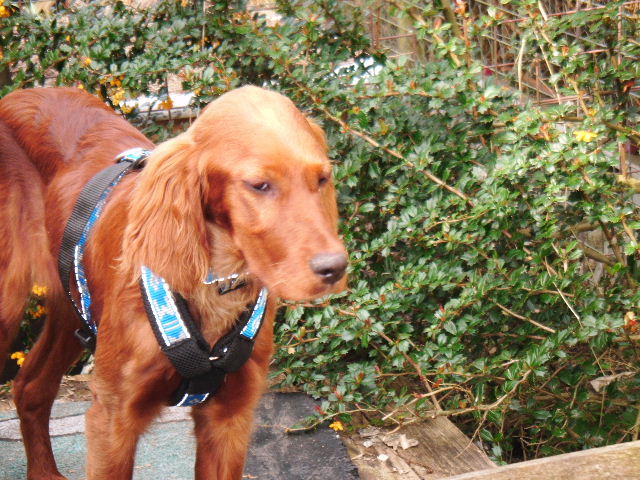 It's a sad story indeed, but it seems that Robin has fallen on her feet after all she's been through. You are doing a great job, keep up the good work. She's looking really well, and most of all, happy. Those are lovely photographs of her and your other dogs together.

Bless you Robin, onwards and upwards.

Comment by Myra Thomas-Rhodes on May 12, 2010 at 2:06am
Truly a very happy ending for such a darling. What a wonderful "family" you have Mary.You are all very much blessed.
M XX

Comment by Carmel Murphy on May 12, 2010 at 2:43am
Wonderful story Mary!! Robin has landed in the right place with you and your dogs;o))

Comment by Yvonne Wark on May 12, 2010 at 4:10am
What a sad story but a very happy ending. Robin looks lovely and I am sure you will have many happy times ahead. What a super dog you Gt Dane is.she deserves a medal.

Comment by Cheryl Gorey on May 12, 2010 at 6:02am
What a beautiful story. I am so glad Robin is such a joy to have and I am so pleased she is healthy, happy and well adjusted after her traumatic life up to her rescue! cheers from down under.

Comment by McBIRDY - Jean DUHANT on May 12, 2010 at 6:45am
A really good experience for both of you !
Robin has found her new mother and you Mary you are just a person with so much love to give !
We are proud of you !!

Comment by mrs dee farndell on May 12, 2010 at 8:08am
Well I am in tears thank god there are people like you about how I would love to get my hands on the bastards that owned her and got her in that state

Keep up the good work and thankyou xxxx

Comment by Sue and Cash on May 12, 2010 at 9:40am
Robin's story brought a tear to my eye. How wonderful and I wish you years of joy and discovery ahead with your new friend.

Comment by Caroline on May 12, 2010 at 9:53am
Thank You for sharing this story. How wonderful that Robin has a new loving home and therapeutic red family :)